"Fr Rogalski may well have worked to create a 'little Poland' down here, as has been said, but that would be a shallow assessment of the life of this man whom we commemorate today."

The below Homily was delivered by Bishop Emeritus of Port Pirie, Gregory O’Kelly SJ, on 13 March 2021 at the Polish Hill River celebrations acknowledging the 150th anniversary of the arrival of Fr Leon Rogalski SJ. To read more about the event, click here.

When Fr Leo Rogalski was asked by the Jesuit Superior General to leave his parish to go to the new colony of South Australia his parishioners in Lancut, Poland, were dumbfounded. They challenged Fr General as to why their priest was being sent “somewhere far away”.

It was a common response, so great were the distances and journey times, and so unknown to ordinary European people was this part of the world.  When the first Jesuit arrived in this land in 1848, he wrote to Superiors that he had reached “the other end of the earth”. 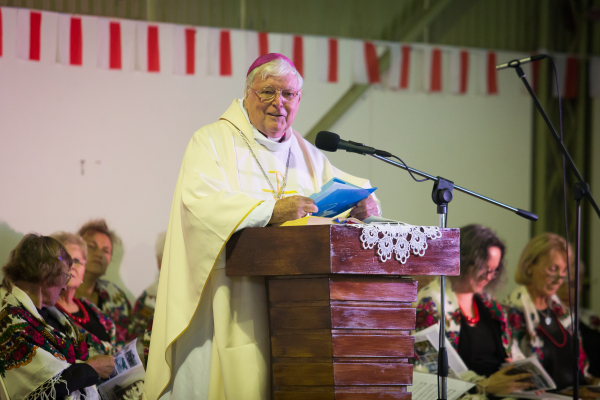 It makes one think of the courage and faith of those early Polish settlers, prepared to risk a dangerous voyage at sea for three months, carrying their small possessions with which to start a new life, concerned for the safety of their families, coming into a land so totally different from their birthplace, and all of it being a gamble as to whether this was the right move or not. It was an act of utter trust and hope; there was no turning back possible, no return to what was. They were leaving a Poland partitioned between the three great Powers of Russia, Austria and Germany, the Province of Silesia under Prussian rule, where religious and economic discrimination was their experience as Catholics, and military conscription weighed heavily on villagers and peasants; theirs was a land made poor by the wars and uprisings.  It was for no small reason that parents would risk their families and all they had in leaving their homes for a totally unknown destination. As their descendants, what thanks Australia owes to such as the Polish pioneers for their courage and daring.

Hence, we have our readings for today’s Mass.

In the wilderness justice will come to live

And integrity in the fertile land…

My people will live in a peaceful home,

And St Paul in the second Reading speaks of the variety of gifts we all have as Christians – “working in all sorts of different ways in different people, it is the same God who is working in all of them.” Whatever our individual gifts, all can lead to the building up of the Body of Christ in the world, “all these are the work of one and the same Spirit who distributes different gifts to different people just as he chooses.”

We think of the gifts our Polish pioneers brought to this land of the Southern Cross.  There was clearly their courage and resolution in even stepping out. There was their sense of hope and perseverance when they encountered the storms at sea and the strangeness of this land and climate and its vegetation – “nothing at all like one has at home”, wrote Jesuit Fr Kranewitter when he arrived. There was their strong sense of nationality, their heritage of Polish culture and language, their sense that they were a community together, that they drew strength from this and each other.  There was their fundamental belief in the centrality of family, that their children were worth all sacrifice.

And, of course, there was their faith, their profound religious conviction tested by persecution at times, and the devotions that expressed that faith, a faith in Christ as Lord that upheld them in the dark times in Polish history, along with their love for the Mother of God as the one who protected them.

Faith and trust in Providence sustained them, as today’s Gospel speaks of it. Like the birds of the air and the lilies of the field, there is a Providence that keeps us. That first Jesuit here in 1848, ordained only six weeks before leaving for Australia, tramped around the paddocks near Clare, knowing no English, having almost no money, no horse, quite alone, thousands of miles from fellow Jesuits; it would have been the same for most of those early Poles.  In his dark times he would repeat to himself a prayer for “courage, patience and hope”, and so would many of those first Polish settlers here.  Sisters and brothers, how we should thank God for the gift of our faith which sustains us. 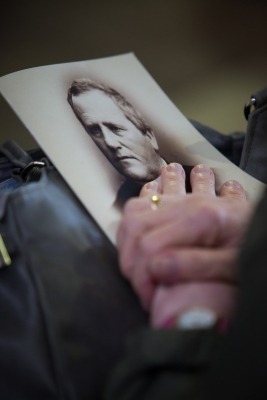 The first group of Poles, thirty-one people from the one village, landed in 1844 in the new colony of South Australia, founded only eight years earlier, and moved to Tanunda in the Barossa Valley, already a strong Lutheran settlement. The next group were those with whom the first Jesuits came, four years later in 1848, of whom 106 were Catholics, from Prussian Silesia. They scattered, and only a few travelled the four days and three nights up to Clare. The third group, the pioneers of this place, some twenty-five families, around 130 adults and children, came in 1858 and journeyed north to here, drawn to the Catholic presence already established at Sevenhill. They started their little farms here, at what was known as Hill River Valley, and over the succeeding years many more families settled here, making it a large community, completely Polish, such that its named changed to Polish Hill River.

The people centred their devotions in the churches at Sevenhill and Mintaro. The church at Mintaro had five choirs, all Polish. They made a quarry cutting to enable easier access to the Sevenhill church for their wagons. But the language barrier presented a real difficulty for the community. Two of the Jesuit Brothers knew some Polish and gave instructions to the children, but for the adults there was no opportunity to hear Mass or sermons or confessions or homilies at baptisms or weddings or funerals in their own language, and many requests were made by the Jesuits for a Polish-speaking priest to be sent out, which finally happened in the arrival of Fr Leo Rogalski on 5 April 1870 as one of three new Jesuits sent from Austria to the Sevenhill Mission, and claimed now to be the first Catholic migrant chaplain in Australia.

Though the big church of St Aloysius was not yet completed, Fr Rogalski and his two companions found a Mission that was thriving. The Jesuit community at nearby Sevenhill numbered six priests and eight brothers, and was charged with the pastoral care of the mid-North, an area the size of France. The college had been established, consisting of forty school pupils, and housing also a novitiate for the Jesuits and a seminary for diocesan priests. The gardens and vineyards cared for by the Brothers helped support the Mission financially. Up to 1880 some twenty-seven little churches and twenty-six schools were founded, and the great horseback journeys to the northern Flinders and beyond had been completed. 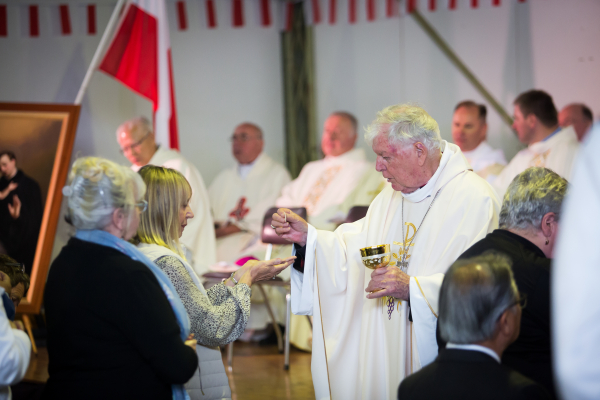 Fr Rogalski was forty years old when he arrived, and he was to work among the Polish people of Polish Hill River, and Tanunda, Peterborough, Terowie and Balaclava for the next thirty-six years, the first priest dedicated as a migrant chaplain, but serving also the wider non-Polish Catholic community in retreats and parish missions, preaching in Polish, German and English. He had been ordained as a diocesan priest and served for four years as an Army chaplain during the Austrian-Italian War, and then entered the Jesuit Order in 1861, and was assigned to the South Australian Mission nine years later.

He was completely devoted to the Polish people.  On their part, the people around Hill River received him with extraordinary displays of devotion and emotion. Within a few days he commenced a parish mission for the people of the district, and the Polish settlers had the delight of hearing a Polish priest celebrate the liturgies of Holy Week and Easter in their own language. Within a year of his arrival he commenced a complex of church, school and library, dedicated to the Polish boy saint, Stanislaus Kostka. He initiated devotions such as those in May to Our Lady of Czestochowa, and the Corpus Christi processions, which endured for well over a century, though the practice of Polish musketeers firing their rifles in volleys of respect as the Blessed Sacrament was carried past, and which practice startled the local journalist, survived only a decade or two.

Polish customs, music and hymns, floral decorations and colour, traditional dress on Feast Days, and the Polish language continued in the district for decades. It became a little Poland in the bush. The new school thrived. The Archbishop confirmed fifty children in 1874, all pupils at the school. Fr Rogalski would come through the week to instruct the children in Polish, and an Irishman, James Crowe, was employed to teach after the Josephite Sisters left the school in 1879, and he learnt Polish too, and taught in the language, surely one of Fr Rogalski’s earlier miracles! Polish devotional literature featured in the library as Rogalski, along with the Austrian Fathers from Sevenhill in their mission centres, placed great emphasis on the education of the people, whose formal education in most cases was slight.  He n ever forgot his homeland and urged support for the Polish Catholics suffering persecution in Prussia. He came an hour before Masses on weekdays and Sundays to hear confessions, and after Sunday Mass there were the joyous weekly celebrations of baptisms of babies and weddings of young couples,  then doctrinal talks for the adults, then sessions  for those preparing to receive the various sacrament, and  all concluding with Rosary and  Benediction, surely a long non-stop day.  There were also the funerals in the Sevenhill cemetery, the tragedy of burying hundreds of children, and the visitation of the sick.  Even after so many families had moved hours of travel north and east to better land in later years, people whom Fr Rogalski continued to visit, there were still an estimated 65 families here in the 1880s.  We have figures Fr Rogalski gave for 1888. They do not tell all the story, as there would also have been confessions and visitations and retreats and so on, but they are an indication of some of his workload in one year – 460 baptisms, 56 marriages, 96 funerals. 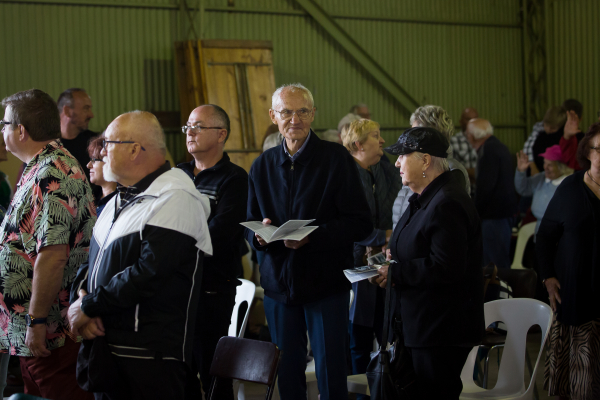 The pace and scope of the labours of this zealous man told on his health, and after thirty years of sustained service of his beloved Poles it broke. “The venerable old Fr Rogalski has suffered a stroke”, recorded the House chronicle in 1899, and he remained partially paralysed.  “Henceforward he became helpless and a little weak in the mind.” For a man who had been so vigorous and strong in his ministry to the Polish people, his last years were those of decline, joining the Lord in his suffering. He continued to inspire the affection of those who lived with him. When the time of his death came on 1906 his religious Superior wrote to the Polish Jesuit Provincial:

He was a missionary full of apostolic zeal.  He toiled a lot, worked a lot, and

accomplished a lot. He lived, so to speak, in the Confessional.  His Polish and

Sunday he went to meet his Maker.  Fr Leon Rogalski was a good, righteous Jesuit,

He was very zealous and holy, and those who have been praying for the repose

of his soul have doubtless felt that they should do well to ask him to pray for them.

The Lord is our help and our shield

May your love be upon us, O Lord.

We know the love of the Lord is upon him. May Fr Rogalski, apostle to the early Polish people of this land, continue to intercede for us, and keep us true to the faith of our ancestors.