Homeless Jesus placed at the entrance to Newman College

Newman College Rector Fr Bill Uren says the Timothy Schmalz sculpture, Homeless Jesus, has been placed in the courtyard at the college’s entrance, in front of the chapel, to call people’s attention to those on the margins of society.

A newly installed sculpture at Newman College in Melbourne will be a permanent reminder to students and visitors of the plight of the city’s homeless people.

Newman College Rector Fr Bill Uren says the Timothy Schmalz sculpture, Homeless Jesus, has been placed in the courtyard at the college’s entrance, in front of the chapel, to call people’s attention back to those on the margins of society.

‘We decided to put it in front of the chapel for a couple of reasons. Firstly, so that everybody coming in and out of the college would see it, and it would remind them of the plight of the homeless in Melbourne and other places.

‘Secondly, we have a lot of weddings at our chapel that are often big events. And we thought it would be a timely reminder to people coming to worship at the chapel, not only weddings, but people generally who come of a Sunday to Mass.’

The original Homeless Jesus sculpture was installed in 2013 at the Jesuit-run Regis College at the University of Toronto, after it was rejected by two other churches because of its confronting nature. 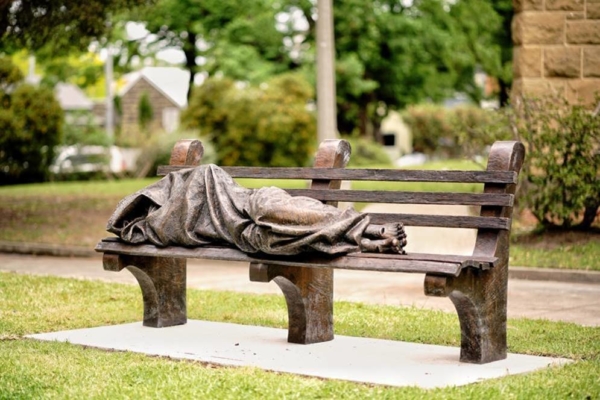 Schmalz presented a miniature version of the statue to Pope Francis in 2013, and another cast of the statue was installed on the street leading to St Peter’s Basilica in 2016. There are currently casts of the sculpture around the world, including one outside Sacred Heart Cathedral in Townsville.

Originally, the plan was to install a sculpture of John Henry Newman, who was canonised last month by Pope Francis, at Newman College, as part of its centenary anniversary commemorations.

However, Fr Uren said it was decided that Homeless Jesus might have a more timely message for the community. The college contacted Schmalz, and a cast of the statue arrived and was installed last week.

‘Some of our students do go out with one of the vans — Coats for the Homeless — which the Order of Malta organises’, he said.

‘It’s a long term investment, and a challenge to everybody, both students and visitors to the college.’