History on the agenda as Intellectual Apostolate meets

Members of the Intellectual Apostolate gathered in Melbourne last week to share with the group about the work they have been pursuing in recent months.

Sixteen people working in the Intellectual Apostolate of the Australian Jesuit Province met last week at the Faber Community (Jesuit Theological College) in Parkville, Vic. It was the second such meeting of 2019, with members gathering to share about the work they have been pursuing in recent months. 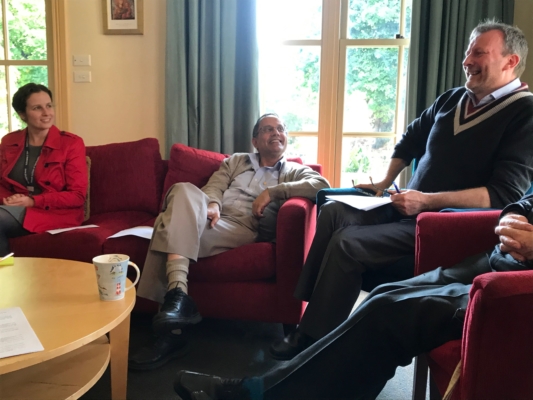 Jesuit scholastic Isaac Demase SJ reported on his research into the history of the Society of Jesus, with a particular focus on the relationship between the Society and the Papacy, from before the Suppression of the Jesuits in the 18th century to the Restoration of the Society by Pope Pius VII in 1814 and beyond.

His paper included an overview of the founding and influence of La Civiltà Cattolica newspaper and the rise of writing as a ministry among Jesuits.

Michael Loughnane, academic dean and research coordinator at Jesuit College of Spirituality (JCS), provided an update on various challenges and achievements experienced at the College over the past year.

Highlights have included the commencement of a course in Ignatian pedagogy by Fr Gerry Healy SJ, and the introduction of a rubric to standardise the marking of papers, which Mr Loughnane stated has led to increased student satisfaction.

Fr Gerard Healy SJ reported on the recent meeting of the Association of Jesuit Colleges and Universities Asia Pacific (AJCU-AP), which he attended with JCS CEO and Principal Deborah Kent.

Fr Tony Moreno SJ, President of the Asia Pacific Conference of the Society of Jesus, was present at the AJCU-AP meeting, to address the delegates on the role of Jesuit educational institutions in pursuing the Universal Apostolic Preferences that were announced last year.

Fr Healy and Ms Kent noted the value of the AJCU-AP conferences for fostering relationships and opportunities for collaboration among member institutions, which include colleges and universities from around the Asia Pacific region.

The Parkville meeting returned to a focus on history, with a presentation by Fr Michael Head SJ, providing an overview of his recent work and some insights into the role he performs as Province Archivist.

This includes giving lectures on the history of the Society to various people including the tertian fathers; assisting institutions with celebrations such as the 150 years of the Hawthorn Parish this year, and assisting people with writing books and doing doctoral theses.

At the same time, Fr Head has become renowned as an expert on the allied intervention in Russia following the Revolution from 1918 to 1921, and has published a number of articles on the topic in the USA.