The heart of Jesuit prison ministry

Jesuit Social Services CEO Julie Edwards reflects on the work of the Jesuit Prison Network and the history of Christian ministry to prisoners.

Jesuit prison ministry has a long Christian history. Across time those in prison usually represent the most despised, feared and forgotten members of any society. In the ancient world, and in much of the modern world, prisoners relied on their visitors for food and for money to pay their jailers and therefore the act of reaching out to prisoners has long been understood as a valued work of mercy. In the Gospels one of the practices that separates the sheep from the goats is visiting people in prison. Jesus assures his hearers that when we visit prisoners, it is he whom we visit. 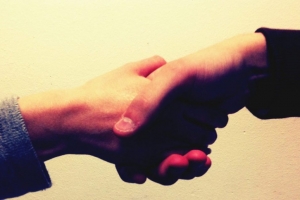 The helping hand image symbolises the work of the Jesuit Prison Network.

For the early Christians, too, prison was an honourable, if feared, place to be. Jesus had been imprisoned before his death with two criminals. Peter and Paul spent time in prison, and Paul’s journey in chains to his execution in Rome, like that of Ignatius of Antioch after him, was a way of connecting with the Christian churches along the way through letters and visitors. They were the first of many martyrs to be imprisoned and killed for their faith.

Ministry to prisoners has been a constant element in Jesuit ministry from the beginning. St Ignatius himself was imprisoned several times during the Spanish Inquisition for speaking on theological matters without a degree, and prioritised prison ministry during his life. Over the centuries prison ministry seems to have been mainly the work of individual Jesuits, mostly as part of a broader pastoral ministry. Jesuits ministered to prisoners awaiting execution, to people in the galleys and hulks and other places of detention. In the nineteenth century when imprisonment became the ordinary form of punishment and no longer simply a place where people were confined before being tried and sentenced, visiting prisoners and celebrating the sacraments in jails became an ordinary part of much parish ministry, as well as a full-time work for some Jesuits.

In more recent Jesuit history, Jesuits and their colleagues who visit people detained in prison or in immigration detention centres have found that it embodied the option for the poor that the Society has made. Not only are prisoners at the bottom of the social ladder, their plight rarely attracts sympathy from the general public. For most governments prisoners are not a high priority and many politicians, in their efforts to gain popularity, try to outdo each other in vilifying them. Prisoners are the forgotten people. As many Jesuits have experienced life in prison, sentenced for their Christian ministry or for breaking the law in order to protest governmental injustice, the hidden life of prisoners has become more revealed.

Both Jesuits serving prison sentences and those in prison ministry have been able to come to know prisoners and to be companions to them. They can also serve them and plead their cause when they are neglected or unjustly treated. Their experience can help ground research and advocacy directed at improving the penal system.

The heart of Jesuit prison ministry, as of so many other forms of ministry, is best exemplified in the masterly visits and homilies of Pope Francis. In the strength and delicacy of his gestures and his words, he embodies the compassion of God, the joy of finding forgiveness and acceptance, and the good news of the Gospel. Both Pope Francis and our Jesuit documents have stressed the importance of going out to the margins of our society. This offers both the privileged place to preach the Gospel and the best vantage point for looking at our own society and church.

Prisoners in particular are a canary in the mine of society, the people who show us the working priorities of society and the way in which societies deal with people who are marginalised. Prisons generally collect people who are considered not to matter. They are filled with the poor, with the mentally ill for whom no other place can be found, with people suffering addictions who steal or do minor trafficking to support their drug habits, with people who have suffered abuse, trauma and neglect from their earliest days. Prisoners often come from locations characterised by significant disadvantage, with few services and supports, demonstrating a lack of care for the young children and families who reside there. Increasingly, too, refugees are held in prisons or their holding places are run like prisons. These are seen as the rubbish of society.

Prisons, too, often make manifest the priorities of a society. In many places the prisons are privatized, allowing private companies to make profit by minimising the resources and the services given to prisoners. These companies and those dependent on them often resist any moves to reform the penal system. Prisons are also a testimony to the irrationality of societies that allow their fears and furies to rule their intelligence — while prisons are necessary in order to protect society from some violent and deeply disturbed people, they do not deter people from committing more crimes. In fact, they make it more likely that people will return to jail. They are costly — socially and economically.

For the majority of prisoners who would like to live sociable lives, but who lack the strength or the help to make healthy connections with society, prisons simply further isolate them: from their families, from education and work, from the broader community. Furthermore, when they leave prison they carry the stigma associated with their time in prison. They find it hard to get work, to find decent accommodation, and to make friends — all of which makes it a struggle to make a new start and stay away from a life of crime.

Disadvantage and involvement in the justice system are inextricably linked. In every country, we find the most disadvantaged and vulnerable in prisons. Some regions are renowned for more enlightened approaches to imprisonment, from which we can all learn. In others, we see disturbing abuses of power and inhumane conditions, while in many nations the death penalty continues to be used.

It follows from the Ignatian tradition of reaching out to the margins and those most in need that many Jesuits and Jesuit organisations would be active in the justice system at various stages of support: for example, in work focused on prevention, in diversion programs, in offering in-prison support (whether prison ministry, practical training or mentoring services) or at the transition stage as prisoners exit detention back into the community. This edition of Promotio Iustitiae* includes insights from those active at a number of these different stages.

Jesuit Social Services is an Australian social change organisation that advocates for a smarter justice system and a safer community. Our belief is that an effective criminal justice system must work to prevent crime from occurring in the first place and that once people have begun down the path of petty crime, every effort should be make to divert them from further engagement in the criminal justice system. Prison should be used as a last resort as the evidence is clear that it further entrenches criminal behaviour. Prisons should focus on rehabilitation and preparing people for their return to the community. Adequate support should be given to people exiting prison to assist them to make a successful transition and reduce the likelihood of repeat offending.

When the prison population grows rapidly, as is occurring in many places throughout the world, we see increasing strain on the system overall. Rapid growth in numbers of people in prison overwhelms the state’s capacity to deliver effective rehabilitation or reintegration programs for prisoners, which in turn leads to higher recidivism rates, further burdening the system. The growth in prison numbers is linked to numerous interrelated factors including social attitudes often driven by the media and politicians, police practices, sentencing legislation, bail and use of remand, parole, quality and availability of programs offered inside prisons and transition support. Unfortunately, we see the same people rotating through the justice system. It is a challenge to stop this cycle, and one that requires significant investment of time and money.

Jesuit Social Services is active at a number of stages in the support cycle – diverting people from prison, helping get them back on track once they have committed an offence, staying connected with them while they are in prison, and supporting them when they transition back to the community. We run programs to help people address the reasons behind their offending (such as substance abuse, mental illness, or poor literacy and numeracy). We help them find housing and work, and access health and other support services – though the reality is that we can assist only a small percentage of people who need such help. Despite the strong evidence for the effectiveness of rehabilitative programs they remain underfunded, compared with the growing investment in building prisons.

In addition to the services we offer to our participants, Jesuit Social Services has a strong policy and advocacy division, which works to influence community opinion and government policies in this area. Our policy team undertakes detailed research and prepares submissions on a range of justice issues. Last year we launched Dropping off the Edge, the fourth in a series examining disadvantage by geographical location. The results were sobering, with the evidence suggesting half of prisoners come from just 6 per cent of postcode areas. We have also campaigned around issues such as raising the age of criminal responsibility in Australia, abolishing the death penalty in neighbouring countries, and alternatives to detention for those with cognitive and mental impairments.

Over the years, in the course of our work, we have crossed paths with a few other Jesuit organisations and individual Jesuits who are working to support those who are caught in the justice system. It was suggested to us that a Jesuit network of those working in prison ministry and the broader criminal justice area would be helpful, both in sharing experiences and ideas and mounting advocacy campaigns in partnership across the Jesuit network. As we explored this idea we discovered that there were many more people involved in this work than the handful we had already come across, and that there was great scope to collaborate for the benefit of all. As a result, the International Jesuit Prison Network was established in 2013. The Network aims to connect Jesuit prison ministries throughout the world, in order to support each other in our work of accompanying prisoners and creating communities of solidarity. In keeping with Catholic Social Teaching and the Ignatian heritage of its members, the International Jesuit Prison Network strives for a just, humane and effective justice system in all countries that reflects the dignity of all people.

Since its launch, we have been encouraged by the number of people reaching out to the Network and contributing pieces to the Network newsletter. In order to widen its engagement, the Network launched a Facebook page and website in 2016, which can be found at www.facebook.com/internationaljesuitprisonnetwork and www.jesuitprisonnetwork.wordpress.com. In addition, the Network produces a directory of members, enabling members to contact one another directly to discuss issues of joint concern.

Prisons are good places to see our society from the underside through the eyes of the poor. They are a good place for Jesuits and colleagues to be engaged. This year, Jesuit Social Services is excited to be celebrating its 40th anniversary. Over the past four decades our work with people in the criminal justice system has been a major focus of our efforts — in direct service and in our advocacy. We are committed to continuing this work into the future, in collaboration with our Jesuit colleagues around the world — and in this spirit of collaboration we are delighted that this edition of Promotio Iustitiae promotes the work of the International Jesuit Prison Network.