During March, Ancita D'Cunha, Australian Province Support Officer and Events Coordinator, visited Hazaribag Province, with Rose-Mary Cassin. Here are a few extracts from her diary of the visit.

We arrive at Ranchi Airport to be given a warm welcome by Fr Bill Dwyer SJ* and his driver Arvind. They had travelled two hours from Hazaribag to pick us up. 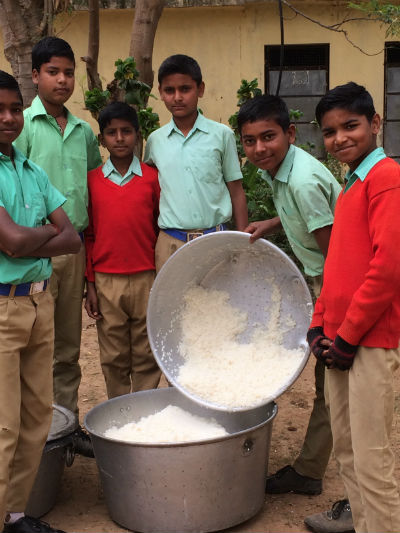 Bill tells us later of an incident that happened while they were waiting for us. A pompous man approached Bill and Arvind, in his driver’s uniform, who were sitting on chairs outside as they waited. The guy shooed Arvind away, demanding he get up and give him his seat. Fr Bill was furious and decided to also give up his seat.

Such is the start of our experience in Hazaribag of how gracious, considerate and kind a man Bill is. I am humbled to see how he and the other Jesuits treat their staff at every level and each other.

Bill has organised a very detailed itinerary for us. All the members of the community have been made to study this as well. ‘I hope you have a good digestive system as you will need it!’ says Bill. He is an inspiration to watch in action. He speaks to every employee with the greatest respect, including teasing the lady who cleans the yard that it is a waste of time sweeping the leaves as more will fall again.

Bill has a few special ‘daughters’. One of them is a nun, Sr Valsa Mathews, who was in a horrific accident, but has since recovered amazingly thanks to the loving care of people like him. Bill helped her by supplying books in large print so that she didn’t have to hold them up, and visiting her often, encouraging her to get better.

There are other similar stories about Bill, and these women are forever grateful to him. They tell me he was very sad when he lost two of his sisters. I can reassure his remaining sister, Mary, that he is in good hands.

Besides dinner at Arrupe House on our first evening to celebrate Fr Gavin O’Sullivan’s* 95th birthday, we are invited out for many lunches, afternoon teas and dinners, some of them in communities where Bill has taught young novices English. They were all briefed about our coming and knew quite a bit about us before we even got there.

It is lovely to see that the sisters have the highest respect and affection for Bill and are delighted to see him.

St Xavier’s School, Hazaribag, where we are staying, is a joy to watch in operation. It has a strong Ignatian ethos; they treat every staff member, be it the sweeper, the cook or the driver, with the utmost respect.

The Hazaribag Old Xavierian Association (HOXA) is impressive in how it helps the community. In a building on the premises, doctors and psychologists (Old Xavs) are made available every Sunday and first Wednesday of the month to give free service to the poor.

The Provincial’s secretary Fabiola (Fabi) — whom I have had many conversations with over the years — and her husband Cyprian gave us a three-course afternoon tea in their beautiful home, followed by presents, much to our embarrassment.

This meal was mostly prepared by her young adult son and daughter. I am so impressed that they have taught their kids to be self-sufficient and not depend on servants as is so easily done in India.

The thing that has struck me the most on this journey is how happy everyone that I meet is. They are mostly religious communities but there are large numbers in each community. They have great comradeship with each other and give us the biggest smiles of welcome.

We visit many such communities: the Carmelites of the Mother of Carmel, the Franciscan Clarist sisters, the Daughters of the Church and the Congregation of the Immaculate Conception sisters. A large number of these sisters are from Kerala, and when they hear of my heritage from the South of India, we get an even warmer reception.

They lead very simple lives and are happy to do so. They each have their own vegetable garden that they are very proud to show off to us, and one of them even has a rabbit that they are fattening up for Easter. A few of the nuns and Jesuits are from the local tribal communities and it is heartening to see how well they have integrated with the others.

We visit the Primary Teachers Education College where Fr Tony Ryan SJ* is based. The teachers are trained at the centre and then placed at the PTEC practice school, Sitagarha, which is on the same site.

The school is very impressive and well run by a Holy Cross sister, Sister Anima. I find it fascinating that the government gives these students their uniform, a bicycle if they want it, their lunch every day and a stipend to encourage them to come to school every day. Hence, every kid gets an education of some sort and has no excuse not to go to school.

I have yet to see a beggar in Hazaribag, which speaks well about the local community and their will to do something with their lives.

We had to meet with the police this afternoon as the new rule is that foreigners must fill out a form, similar to our Province’s professional standards declaration.

The policeman is more interested in how much Hindi I can remember, having been away from India for 32 years. He asks after Fr Hans Hendriks SJ* and the late Fr Ken McNamara SJ (an Australian Jesuit who served in India for 60 years), so he obviously knows the mission well. 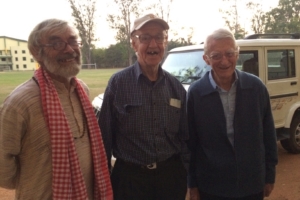 Fr Bob Slattery SJ* devotes a day to taking us around. He takes us to Karjarkilo. On the way we stop at Pandwa village and pick up a stray Jesuit beside the roadside, Fr Bob Billings*. He takes us to a Santal family’s home, where he celebrates Mass for us, Santali-style.

It is a very moving experience, one that I will never forget. The whole Mass is in Santal language, which Bob Billings is fluent in. The family prays and sings devotedly, as if they have been doing so for a very long time. Their musical chant is still so vivid in my memory.

Hans Hendriks — who has served in India for over 60 years ­— must be pleased to see his work being carried on very capably by Bob Billings.

We then drive off to see the schools run by the Jesuits in Kajarkilo and Tarwa. Bob Slattery is an entertaining host and we have spent a most enjoyable day with him. He has official business at each of these schools, having been put in charge by the Provincial to look after the upkeep of the schools in the province.

You realise how much our Australian Jesuits have given up when you see them work over here. They enjoy having a fellow Australian visit; it gives them a piece of their home country, even though they have made their home in Hazaribag now.

Today is our last day, as we travel back to Delhi via Ranchi tomorrow morning. I pray I can return some day and enjoy this amazing place of grace all over again.

I have been truly inspired to see what has been achieved in the 66 years of the Australian Jesuits being in Hazaribag. They have made this a happy and peaceful place to live.

People have the fondest memories of Fr Phil Crotty SJ*, and some teachers tell me they remember Fr Paul Horan SJ* fondly from when he was principal here.

Rose-Mary and myself are very grateful to the Superior, Fr George and the rest of the Jesuit community at St Xavier’s Hazaribag for their warm hospitality. They made us feel like part of the family.

Our sincere thanks also go to Arvind, our driver; Asha, Raju and Bhaleshwar our cooks; and others like Sunita teacher, Sr Valsa and many others who made us feel so welcome.

Till we meet again, or as they say in Hindi, phir milenge!