Giving all they have

‘Like the boy with five loaves and two fish, they gave what they had; they gave all they had.’ In a homily for the special St Ignatius Feast Day Mass at St Canice’s Parish in Sydney, Fr Frank Brennan paid tribute to the people of Timor-Leste, and recognised the work of Australian Jesuit communities in supporting them.

There was a festive ‘buzz’ in a packed St Canice’s church on Sunday 29 July 2018 before the start of the special Feast Day Mass to honour St Ignatius, and to celebrate the parish’s relationship with Jesuit Railaco Mission in Timor-Leste. 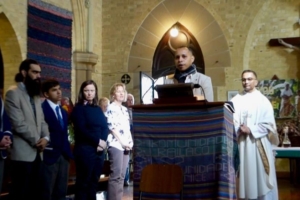 Kaleb Taylor from St Ignatius’ College, Riverview, brought the congregation to silence with the first long drawn-out notes of his didgeridoo. The haunting sounds quickened and reverberated around the church, inspiring a deep sense of connectedness as the parishioners embraced the sounds of our ancient land. Two young First Nations students from Riverview, Kelvin and Ryan, then delivered a poignant ‘Welcome to Country’.

Another moving feature of the liturgy was hearing the word proclaimed in tetun, the local language of the people in Railaco, by Sergio M. Santos. Sergio is a graduate of NOSSEF, the secondary school in Railaco where St Canice’s built the first two-room besser-block classroom in 2005. He now works with the Timor-Leste Consulate General in Sydney.

Sergio rightly puffed with pride as Fr Frank Brennan SJ addressed him in his local language before delivering his homily (presented in full below), thanking him for representing his people of East Timor so well.

Some years ago, I was visiting the Aboriginal community at Nauiyu Nambiyu, Daly River, in the Northern Territory. That’s where the Austrian Jesuits established a mission to Aborigines in the 19th century. I called in at the Merrepan Arts Centre. One of the young women artists showed me a painting inspired by today’s Gospel [John 6:1–15] in which Jesus feeds the 5000. She was explaining her dot painting to me.

In the centre was a large red dot. In that part of the world, the people have a great devotion to Jesus as the Sacred Heart. So in my all-knowing way, I asked, ‘Is that Jesus in the middle of the painting?’ Surprised, the artist said, ‘No, that’s the little boy with the bread and fish.’

She captured the theology of it all in one. The boy who came forward had five barley loaves and two fish. He didn’t keep two loaves and one fish for himself. He voluntarily gave up all that he had. The little that he had was all that Jesus needed to feed the 5000 and to have plenty of leftovers. But it required all that the boy had.

Ignatius Loyola would be well pleased that we have gathered to celebrate the contribution of Jesuit schools, parishes and social outreach to provide assistance to those most in need. How good that students from our Australian Jesuit schools have visited the Jesuit parish at Railaco and are here in the Jesuit Parish of St Canice to report on their experiences.

I first visited East Timor in 1992, on the first anniversary of the Santa Cruz Massacre. I was there as a guest of Bishop Belo. The people were living in mortal fear under the Indonesian occupation. Like the boy in the Gospel, Timorese leaders in the face of such oppression said that they had little to feed the aspirations of their people — only five loaves and two fish.

But with faith and hope, that’s all they needed. They gave their all, little though it was. It was enough to counter the weight of the Indonesian military machine.

I then lived and worked in East Timor in 2001–2 after all the troubles. Most of the infrastructure had been destroyed. What hope was there of building a new nation? The people persevered, and like the boy with five loaves and two fish, they gave what they had; they gave all they had. They established a free, new nation, despite the antipathies of entrenched social divisions.

In recent months, the leaders of Timor Leste have finalised the negotiation of a maritime boundary with Australia. This was a David and Goliath struggle. Once again, the Timorese were like the little boy with only five loaves and two fish. It was all they needed.

The key to today’s celebration is that the boy did not say, ‘I’ll keep one fish and two loaves for myself.’ He gave all he had. Paltry though it may be, that was all that was needed for the acorn to grow into an oak tree, just as the modest acorn contributions from the parish of St Canice’s have grown into the oak tree of support and parish sustenance at Railaco.

Ignatius would insist that our handful of loaves and fishes contributes to the common good; that they be given with a deep interior freedom and a commitment to make all our gifts available to achieve the magis, the greater good, to the greater glory of God, professing the faith that does justice for all, particularly the poorest of the poor. And that will be more than enough, no matter what the odds. This is the source of our hope. Happy Feast Day.