‘This is a hospitable book — a tribute to hosts who have made him welcome, and to guests who have found him a knowledgeable and friendly companion.’ Fr Andrew Hamilton SJ reviews Portraits: Popes, Family and Friends, by Fr Gerald O’Collins SJ.

Those who have read Fr Gerald O’Collins’ three volumes of autobiography will be delighted to find the same easy and confident style in Portraits: Popes, Family and Friends. It complements the earlier books by offering short portraits of significant people in his life, ranging from his parents to popes and to a wide range of friends. 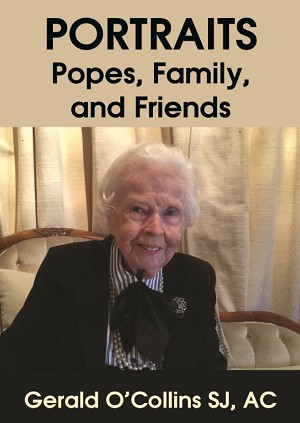 Of the people whom he describes, the best known are the popes whom he came to know while teaching in Rome: Paul VI, John Paul I, John Paul II and Benedict XVI. He writes of them in a way that catches their humanity and assesses the lights and shadows in their contribution to the Church.

His portraits are enlivened by accounts of his meetings with them and by vivid details that speak more powerfully than eulogies. For example, his description of a sermon of Paul VI conveys poignantly his frailty and solitude:

‘When the time came for the homily, the officials put him in a chair in front of the altar, supplied a microphone, and then left him all alone — a frail figure, whose body seemed disintegrating with pain. His loneliness struck me, as he delivered his words in his normal plaintive tone.’

His most extended comment describes Pope Benedict XVI, whom he met both as Prefect of the Congregation for the Defence of the Faith and as Pope. He praises him generously as a theologian but is critical of the way he treated theologians who became persons of interest to the CDF.

His familiarity with the Roman world where popes are part of the city furniture adds spice to his accounts. When a colleague, one of the very few who predicted that Cardinal Luciani would come out of the Conclave as Pope John Paul I, was asked why he tipped him, for example, he said, ‘He was the only clean Italian Cardinal.’ O’Collins’ description of his pastoral gifts and sweetness of disposition makes it clear how great a loss was his death to the Catholic Church.

When O’Collins describes his family we can see from where come his characteristic confidence, breadth of culture and gift for conversation with people of high and low status. His parents represented the Irish Catholic tradition at its best and always included the children in the conversation with guests, no matter how distinguished.

From a host of friends O’Collins chooses people whom he met at different parts of his life. They include Mother Teresa, first met in Australia and then in many other parts of the world; Geoffrey Chapman in England; Frank and Orietta Pogson Doria Pamphilj, his close friends in Rome; Sr Jan Gray and Fr Peter Steele, both dead before their time in Australia; and, in Rome, Fr Jacques Dupuis, his fellow theologian whom he supported when he was accused of unorthodoxy.

This is a hospitable book — a tribute to hosts who have made him welcome during his life, and a celebration of guests who have found him a knowledgeable and friendly companion. It is filled, too, with stories of meals, of good conversation, of humour and seriousness, and of people met in celebration and in grief.