Lunar New Year, as seen from an Ignatian and Jesuit perspective, can show us the richness and distinctiveness of the gifts that the Jesuits share in our communal life and with our lay companions in the mission of service in the Asia Pacific region.

When I was growing up in Vietnam in the 1980s, Têt was the one national holiday that everyone celebrated, no matter which religion one practiced. It was my favourite holiday other than Christmas.

Whilst the Chinese cultural footprints on the celebration are characterised by bright red envelopes, firecrackers and dragon dances, for me it was the food, particularly Bánh Chung and Bánh Têt, that made it distinctively Vietnamese. In that sense, during my childhood I made no connection with the Chinese history of the celebration let alone acknowledged that it was also a holiday celebrated in many other Asian countries. Perhaps I was constrained by the scarcity of news from the outside world or by the result of learning a particular version of history in school.

Looking back, my initial experience and understanding of Têt and Lunar New Year now seems far from the multicultural character of the celebrations here in Australia today

When I arrived in the United States in the early 1990s, I was introduced to Chinese New Year, or ‘Lunar New Year’ to be inclusive of other Asian cultures. Celebrating Têt with my family and within the Vietnamese community, it was clear that many of the culinary elements of the celebration migrated along with the people and evolved over the years. For example, the Vietnamese Americans had updated the Bánh Chung and Bánh Tét to include an outer layer of cling wrap. 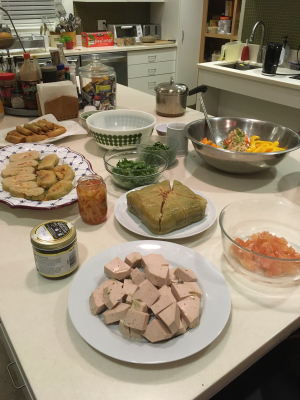 Foods laid out for a celebration of Lunar New Year at St Peter Faber Jesuit Community in Boston, February 2020. You can see the Bánh Chung (square sticky rice cake). Also shown is the Yu Sheng dish (in metal bowl) for the ‘prosperity toss’ commonly celebrated in China and Southeast Asian countries such as Singapore and Malaysia.

After moving to Australia in the early 2000s, I made friends with other Asian students. These Malaysian, Thai, Singaporean and Indonesian friends of mine would likely have some Chinese blood, just as I now admit to having myself. When we celebrated Lunar New Year together, they again introduced me to different foods and customs. This experience gave me an appreciation for both Lunar New Year’s multicultural nature and the distinctively Vietnamese Têt of my childhood.

Whilst the Vietnamese Jesuits in the Australian Province make up the largest number of Asian descendants, we share this Lunar New Year celebration with the Australian Jesuits who were born in Indonesia, Hong Kong and Malaysia. Not only that, the Australian Province, as part of the Jesuit Conference of Asia Pacific (JCAP), shares this celebration with the wider Asia Pacific region. With the diverse and distinctive ethnic and cultural characteristics that the festival has taken on across Asia, it would be difficult to minimise Lunar New Year’s multicultural significance in society today.

Just as food brings people together, this celebration is something to be shared. It is undoubtedly more than the Ignatian charism or the virtue of being a Catholic religious order that links Jesuits together. An intercultural celebration such as Lunar New Year is not merely something the Jesuits share across provinces – it can also be another celebratory way of connecting the provinces of JCAP. 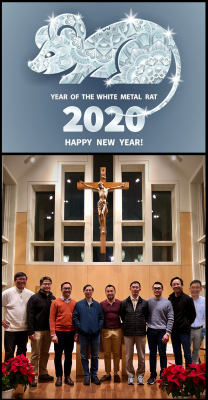 A greeting card for last year’s celebration at the Faber Community in Boston, featuring myself (third from left) and Eka Tanaya SJ (second from left). Photo and artwork by Martin Ngo SJ (USA West province – UWE).

Lunar New Year, as seen from an Ignatian and Jesuit perspective, can show us the richness and distinctiveness of the gifts that the Jesuits share in our communal life and with our lay companions in the mission of service in the Asia Pacific region.