The Australian Province of the Society of Jesus celebrated the ordination to the priesthood of Fr Ramesh Richards SJ last weekend.

The Australian Province of the Society of Jesus celebrated the ordination to the priesthood of Fr Ramesh Richards SJ last weekend. 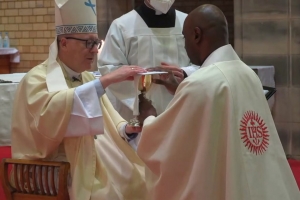 The Ordination Mass took place at St Mary’s North Sydney on Saturday 8 May and was live-streamed to Jesuits and companions across Australia, as well as to Ramesh’s family and friends in Malaysia.

Born in Malaysia, Ramesh moved to Australia to study architecture at Melbourne University. While at university he came in contact with Jesuits at Jesuit Theological College and at Newman College, a Catholic university college run by the Jesuits.

Ramesh decided to join the Australian Province of the Society of Jesus, and was accepted in 2010. He worked in Jesuit schools and in the Cardoner Project for young adults in Sydney. He was then sent to Boston College in the USA for theological studies. In 2018 he was ordained a deacon.

Bathurst Bishop Michael McKenna, who first met Ramesh 15 years ago before he’d joined the Jesuits, presided at the ceremony.

‘Ramesh has grown beautifully in his years of formation with the Jesuits’, he said. ‘I pray that Ramesh will grow in the depth of his understanding of what it means to be a priest and to accept God’s grace in trying to live that out.’

Traditionally, the cloth used to wipe the excess chrism oil after the bishop anoints a new priest’s hands is presented to the priest’s mother. However, because Fr Richards’ parents could not make it to his ordination, he chose for the meantime to lay the cloth at Mary’s feet in the church’s shrine of Our Lady of the Way, and to dedicate his priesthood to the protection of our Blessed Mother.

Find more photos and videos on the Be A Jesuit Facebook page.