At a meeting of Jesuits in Bilbao, Spain, Fr Arturo Sosa asked Jesuits to pray for the cause of Fr Pedro Arrupe. 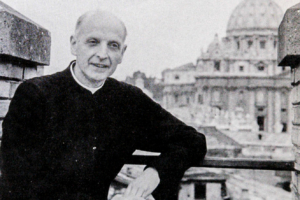 ‘We are still at the beginning of the process, but Angelo de Donatis, the Cardinal Vicar of Rome, has given the diocese of Rome approval to open the process of beatification’, he said.

Fr Arrupe was superior general of the Society of Jesus from 1965 to 1983. He guided the Society through the years after Vatican II, and helped steer a course through a time of great change in the Church.

In a landmark speech at the Tenth International Congress of Jesuit Alumni in Spain in 1973, Fr Arrupe set out a new vision of education and social justice action for the Society – the idea of ‘men and women for others’.

A witness to the horrors of Hiroshima, he used his medical skills to provide care to people who had been injured by the nuclear attack. He described it as ‘a permanent experience outside of history, engraved on my memory.’

Arrupe also spoke in depth about the role of suffering in leading us closer to the love of Christ. His writings are particularly poignant given he spent the last ten years of his life bedridden after suffering a debilitating stroke.

‘The only power capable to bend this hard rod of tribulation and suffering is the burning flame of the love of Christ. Hence in the Heart of Christ we have the symbol and the key of this divine alchemy, which transforms suffering into joy, and pain into bliss’, he said in a homily for the Feast of the Sacred Heart in 1975. ‘One thing is certain—the true joy of Christ springs from love and the way to reach it is the way of the cross.’

In announcing the beginning of the beatification process, Fr Sosa also asked for the assistance of anyone who has useful information about religious devotion to Arrupe.

‘[He was] a man of truth rooted in Christ and dedicated to mission’, Fr Sosa said, ‘whose greatest miracle is that we are here today.’