At an Australian Catholic University graduation ceremony on Wednesday, Fr Chris Willcock SJ was awarded an Honorary Doctorate for his contribution to liturgical music.

Below is the full Occasional Address delivered by Fr Christopher Willcock SJ at the conferral. 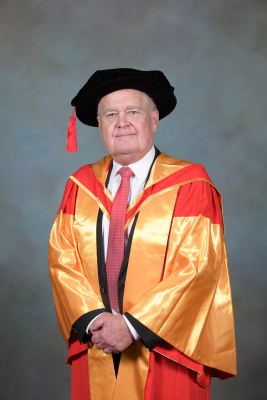 Let me begin by thanking the University for granting me this signal honour today. Whilst the honour has me as its target, I am not the full story. That is to be found in the people among whom my life and ministry as priest and composer has been spent: the many parishes, communities and individuals who have sung and played what I have written, either in their worship or outside their worship.

Composers are best employed when they’re composing. When they start talking about composing they usually become less reliable. I am not, therefore, going to talk about what I do when I compose, but rather say a few words about what being a composer and a believer means to me.

If you start by asking the question: ‘what is music?’, the answers are usually given in terms of other media: music is a language, or even a universal language; music is architecture in sound, music is the food of love, and so on. But you can’t go wrong if you begin by saying, simply and obviously, music is sound. But music is not just sound. Rather, it is sound that can set up, or trigger, an emotional response, can trigger an association with some other experience, even a non-musical one, including ones that occur to the listener and that did not even enter the composer’s mind. This can make the next question: ‘what does music mean?’ or even, ‘what does this music mean?’ particularly fraught.

A few years ago, the first performance of a work of mine called Akhmatova Requiem was given in St Paul’s Cathedral in Melbourne. The piece is for a soprano solo accompanied by a small orchestra of strings and percussion. The text is a translation into English of a cycle of Russian poems by Anna Akhmatova who lived through the Stalinist era and who, quite courageously, was a well-known voice against Stalin’s barbarism. In the 1930s her son Lev was imprisoned in Leningrad where she lived, and Akhmatova, along with the other women who queued up daily outside the prison to try to see their menfolk inside, was once asked by another woman in the line, “Can you describe this?” And Akhmatova answered, “Yes, I think I can.”

Then, as she says of that other woman in the preface to these poems, “Something like the shadow of a smile crossed what had once been her face.” Returning to that first performance of Akhmatova Requiem in St Paul’s, the audience were generously receptive. It had clearly made quite a strong impression. As I was moving down the main aisle to leave the Cathedral two Asian women stopped me to say thank you, and how moved they were by the performance. Once I learned that they were from Cambodia, I asked them, “How can the events of Stalinist Russia in the 1930s have had any meaning to you living in Cambodia.” “Oh,” they said, “it wasn’t the sounds and the story of a Russia we never knew that we were hearing, it was of the tortures and the killings by Pol Pot which we did witness.” I had nothing to add to that declaration. These women had found their meanings in the music.

Let me now move even closer to the task I set myself earlier, to say what being a composer and a believer means to me.

To be a composer and a believer is to be critical. Before that word came to mean “damning”, or at least “opposed to”, “critical” meant, and continues to mean, discerning, judging, even making decisions. The viewer standing in front of Picasso’s Guernica is invited to look into the work facing her or him and to decode a meaning for him- or herself. The audience member attending a performance of Macbeth is invited to hear not just the poetry and witness the drama of Shakespeare’s language, but to resonate with the chords of ambition, even ambition that ends up killing, which this poetry and drama strikes in the theatre-goer’s own self.

As you the viewer or the spectator look into or enter into a great work of art, you are at the same time weighed up by it, critiqued by it. Such works can be said to be “critical”, in its many senses.

Music, I believe, more than any other art form, operates at this resonating level to a high degree. By using the word “resonating” I’m using a word that is not a metaphor for music like “language” or “architecture”, but is proper to the semantic field related to “sound”.

If you’ll allow me a final anecdote. A couple of years ago now, I was attending a performance of Tchaikovsky’s Pathétique Symphony by the Melbourne Symphony Orchestra. I was there with a Jesuit friend, and we had moved from our seats high up in the gods in the first half to seats, still in the gods, but closer to the stage after the interval. I ended up being on the aisle and my companion was sitting next to me with a young couple on the other side of him. Tchaikovsky’s masterpiece began, and after about three or four minutes I started hearing the muffled sounds of sniffling and snuffling coming from one of the couple to my left. Being the well-trained concert-goer that I am, I did not look across to see who was making these sad noises, but I feared that this would make it a very Pathétique symphony indeed if this kept up for the next forty-five minutes. Happily the sounds of distress were not continuous, and I was only intermittently aware of the grief sitting over to my left. At the end of the work, the audience reception clearly showed how much it appreciated the performance, and then I thought it safe to have a discreet look at the distressed young woman who was sitting two seats away. I was dumb-struck when I realized that it was the boy, not the girl, who was crying during the symphony. Something in the music had clearly struck him in a way that brought him to that strong display of emotion in public that we rarely witness. Apart from a salutary lesson for me in gender stereotypes, the event also taught me that even after a hundred years since its composition, a work like Tchaikovsky’s Pathétique still has the power to bring to expression emotions, memories, feelings, or whatever the trigger is, that had this young man crying.

Music, more than words, images, textures and aromas, brings us into contact with the utterly inexpressible, in short, it brings us into contact with the divine. Whether or not you are a composer (and most of us, happily, are not), or whether you describe yourself as a musician, or a music-lover (and happily many of us are), we belong to a world where sound, particularly the organized sound that we call music, is a medium in which our experience can be stored, retrieved, reflected upon, acted upon, that is part of our spiritual life. For myself I would describe music as a critical part of my spiritual life, the “sound-wave” along which God communicates with me, and along which I, as a composer, communicate with God. We all of us, I believe, have a form of “sound-wave” along which our connection with the divine travels. Music, I testify, is a privileged medium of this communication, and I am privileged to call myself one of its servants.