As the family of St Aloysius Gonzaga SJ wanted him to carry on the dynasty, enhancing its prestige and wealth, St Aloysius wanted to be a priest and give his life to God.

St Aloysius was an awkward young man. Awkwardness often goes with the turf. It is a time for exploring new dreams and possibilities for which you still have no words. If those dreams don’t fit with the expectations that others have of you, you need great strength to follow your dreams. You become awkward. It is then easy for those looking on to use the awkwardness to discredit your dream.

That was the case with Aloysius Gonzaga. Born in 1568, he died at the age of 23. He was soon made a saint and appointed the patron saint of youth. Ironically he spent his young life defying expectations but as a saint helped shape the expectations of other young people.

Luigi Gonzaga was born the eldest son of a rich, noble family, and was naturally expected to increase the wealth, prestige and connections of his family through military prowess and connections at court. At the age of three he was kitted out with his own set of armour and taken by his father on military manoeuvres. As he grew older he was exposed to the workings of the Mantua and Spanish palaces. The courts of nobles then were full of cynicism, vanity, envy, violence and lust. He is said to have seen two of his brothers murdered. At the royal courts his future and the future of the family dynasty were being assured. He was to toughen up, learn to use charm as a weapon and wealth as a charm.

The trouble was that Aloysius did not want any of it. He dreamed of becoming a priest and giving his life to God. Among the Gonzaga men these dreams were incomprehensible and intolerable. His father was furious when confronted with them. 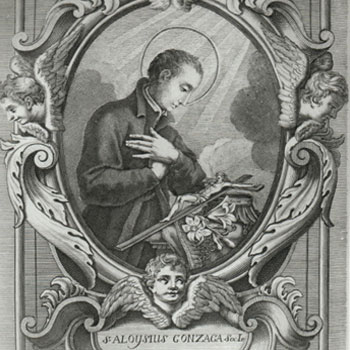 Aloysius dug his heels in and set about living a holy life. Awkwardly. With only stories of saints to guide him, he prayed for long hours, fasted rigorously, and set himself to join the new and controversial Jesuits. His father eventually gave in; Aloysius renounced his inheritance and became a Jesuit.

He had to learn that religious life was a community, not simply an individual game. He moderated his penances, was a brilliant student and a good companion but his health was weak. He died nursing during a plague epidemic. He was forbidden to nurse plague victims, but ironically one of the safe patients he was allowed to nurse had been wrongly diagnosed, and Aloysius was infected.

Aloysius spent his life sailing into a headwind. Then, as now, young people were valued by the economic, military or political contribution they could make and not for themselves. But many continue to insist awkwardly that dreams matter more than money and status.