Peter Saunders stepped down as coordinator of the Being With God in Nature Ministry in June. Companions in the spirituality ministry paid tribute to his groundbreaking contributions.

Peter Saunders stepped down as coordinator of the Being With God in Nature Ministry in June.  Companions in the spirituality ministry paid tribute to his groundbreaking contributions. 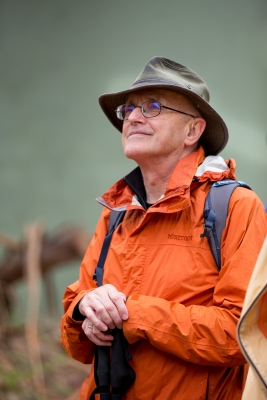 Peter first joined the Campion Centre of Ignatian Spirituality in 1997, when Fr Michael Smith SJ was director. He brought with him both a keen desire to know more about spiritual direction and a background in psychotherapy.

He was there at the beginning of the Arrupe program, and planned and taught a number of units at Sentir. He completed his PhD in 2013 with his thesis on Psychodynamics and the Spiritual Exercises.

It was not long after this that the Being with God in Nature Ministry had its origins. With the blessing of then-Campion Director Fr Iain Radvan SJ – himself a keen bushwalker – Peter organised a series of retreat-style walks in 2015.

‘Peter’s somebody who gets a lot of spiritual refreshment from nature. It’s a very important part of his life and psyche’, says Michael Bertie, who became part of the team working with Peter in the Being With God in Nature Ministry after attending a five-day retreat in Wilson’s Promontory that year.

‘Peter saw that there’s a vast number of people out there who are spiritual people, who get their spirituality from nature. This is the means to tap into that, and bring them into a Christian setting’, says Michael.

An experienced spiritual director and psychoanalyst, Peter brought this experience to the Being with God in Nature Ministry.

‘Peter is very comfortable with silence. I guess that goes back to his idea, and his deep thoughts about renewal in nature. You are  in a cathedral of silence, where there’s the wind and the birds and that’s it’, says Michael. ‘Peter has the ability to listen, and then draw people out.’

‘Peter has continued to give of himself wholeheartedly to better our world by his commitment to the prophetic Laudato Si vision’, said Michael.

‘He is deeply respected by his colleagues, especially at Campion, and will be sorely missed.’

Sue Martin has taken over as coordinator of the Being With God in Nature retreats, as part of Jesuit and Ignatian Spirituality Australia. Sue is also the Reconciliation with Creation Project Officer for the Australian Jesuit Province.

Peter is also on the organising committee for the International Ignatian Ecospiritual Conference, which is taking place from 26 to 30 September 2021 in Cairns. For more information, go to iiec2021.org.au.