Our journey in Lent is with Jesus, who also had to face his fears and uncertainties as he entered Jerusalem, writes Fr Brian McCoy. May his journey of vulnerability and courage strengthen our faith, offer us hope, and overcome our fears.

This month our Australian Province is celebrating the arrival of a Polish Jesuit, Leon Rogalski, in Australia 150 years ago. 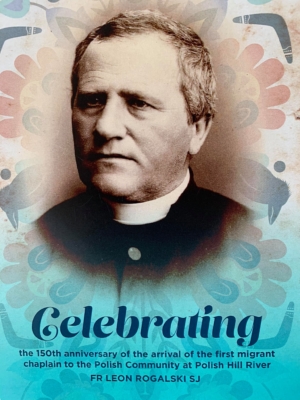 Rogalski arrived on the 28th March 1870 as the first Polish chaplain to Polish migrants who were beginning to settle in South Australia.

Rogalski was 40 years old. His generosity and sacrifice were enormous. He was not an economic migrant seeking a new home. He had no family in Australia. He did not volunteer but was asked to go after another Jesuit became ill. There was little chance of his ever returning home.

His journey began with a three-month trip by boat from Liverpool to Australia, a place then considered to be at the far end of the known world. Today, it might be like asking someone to volunteer to go to Mars and be chaplain to the residents there.

Rogalski faced his fears and the uncertainty of what he might find in this new colony of South Australia. He went on to live for some 35 years in Australia, serving the Polish community but also English and German-speaking migrants. He was much loved.

As our world is addressing its fears in the light of the coronavirus, this week we heard of the forthcoming beatification of Rutilio Grande, the Jesuit who was killed on the 12th March 1977 in El Salvador along with two others by Salvadoran security forces. He had courageously spoken out for fair wages for farm workers and is now recognised as a martyr along with his two lay companions.

So touched was Archbishop Oscar Romero by their deaths that the following Sunday he cancelled all parish Masses in his diocese to celebrate one with 150 priests and 100,000 people in the centre of San Salvador. This was a sign to the army and National Guard that they could not kill with impunity. Fear was not going to drive or define his world.

This week is also the first anniversary of the Christchurch massacre, 15th March 2019, when 51 people were killed. While we were impressed at how the New Zealand nation responded and united against this violence, we also know that the massacre has left many scars and wounds. Fear continues to threaten, isolate, unsettle and divide.

This week we might draw courage from people like Leon Rogalski, Rutilio Grande and Oscar Romero and those New Zealanders who refuse to allow violence to separate them from their Muslim brothers and sisters.

Our journey in Lent is with Jesus, who also had to face his fears and uncertainties as he entered Jerusalem. He needed no staff appraisal process to realise that one of his closest friends was likely to betray him and others would deny him. A lonely road to travel. Yet he found the strength to continue. May his journey of vulnerability and courage strengthen our faith, offer us hope, and overcome our fears.