Extolling virtues as part of a holistic education

'Each of us, by our choices to do or not to do, exercises an influence on the community we live in.' Fr Chris Middleton SJ reflects on the virtues of gratitude and goodness and what a school that extols them contributes to the soul of society.

One of the aspects of Xavier College that our students take pride in, is the enthusiastic and voluntary support given to the efforts of their fellow students. Thus, at the APS Athletics on Saturday 21 October, Xavier will have a large cohort of supporters cheering our athletes on. Going on previous years this will be a feature distinctive to Xavier. 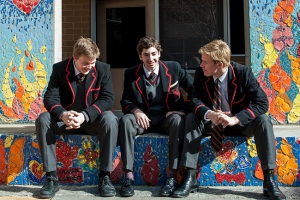 The ‘red and black army’ is not always an unmitigated blessing and it can get carried away with itself, but at its heart is an appreciation of the efforts, talents and commitments of their fellow students. In a culture where it is easy to take things for granted, a school spirit that is distinguished by its volunteerism, its inclusiveness across years and its good humour, as well as the efforts of our athletes, are worthy of recognition.

The term 3 holidays also saw examples of participation and commitment across a wide range of activities. A number of our students were in Italy on a language exchange, while some of our year 9s ventured to northern Australia in an experience that had as its focus engagement with our Indigenous peoples. Thirty-six of our year 11s undertook the Kairos retreat. Xavier hosted the Australian Jesuit Schools’ Basketball carnival over the holidays. St Ignatius’ Adelaide, St Aloysius’ Riverview and Loyola Senior High participated. All players were billeted with our families. Xavier went through the carnival undefeated.

One student participated in the AFL Draft combine and another was selected into the AFL Academy. Our rowers and First cricketers were also training in preparation for their season. And our year 12s spent many hours in the school library and in doing trial examinations in the last week of the holidays. All these activities included the generous support of staff during the term break.

Such activities provide me with an occasion to reflect on the virtue of gratitude. At one level, a school community such as Xavier is essentially a large and diverse network of involvements, underpinned by generosity, both seen and unseen. We have a staff that goes the extra mile in so many ways: correcting a draft at night or over the weekend, tutoring before or after school, taking part in immersions, camps, retreats and tours, lending their skills across the co-curricular area, often beyond what is strictly required of them. Similarly, we have a parent body that is engaged at so many levels and with such generosity.

If one stops and reflects, it is amazing how much we rely on such support, not to mention the support of old boys and the students themselves. In many a presentation I remark that generosity is very much the hallmark of the school as I experience it, and gratitude for this is very much on my mind at this time.

Schools, not surprisingly, focus on results and outcomes, but certainly in our tradition of holistic education, the formation of character has a distinctive place in what we seek to do at the school. The language of virtues, itself, has perhaps slipped somewhat from usage. And the value of traditional virtues such as honesty, fairness, respect, gratitude and goodness are not always as self-evident as we might think.

There are strong voices in our society, for example, that communicate success primarily in terms of whether one can get away with it, as the most relevant consideration in determining a course of action. At times both our political and financial systems appear to convey such an approach. Respecting another person’s safety would again seem to be self-evident, but how often do our sporting or media stars appear to model something different, especially in their treatment of women.

The silence or inaction of good people in the face wrongdoing is something we judge to be negative, yet taking action is often coloured by the fear of ‘dobbing’. And the ugliness of an unthinking mob action has been a constant temptation in the human story, yet our media often caters for such a sentiment in sensationalist reporting focused more on ratings than responsible and measured reporting.

The most effective response is not to be found in laws or rules, whether in a school or in the community, though of course these are necessary. The best response is found in what we define among ourselves as acceptable and thus tolerate. Each of us, by our choices to do or not to do, exercises an influence on the community we live in. Presuming, as I do, that overwhelmingly people are good, it is often the silence or inaction or going along with a crowd that is most damaging to the creation of an environment in which virtue flourishes.

For example, a fight between two boys may, in itself, have various origins and explanations. But the mindless setting up of such a fight, or the cheering on of a clash which may have such potentially harmful results, or simply the failure to alert others that something like this may be about to happen, all involve moral choices and carry negative implications for the common good of the community. The action or inaction of each of us has an impact on those around us and shape our environment.

A school’s ability to communicate this, to my mind, goes to the heart of the formative role of a school. It is both about personal character and responsibility and about community, about how we get along with each other. It is about developing our sensitivity to the rights, needs and wellbeing of others through the experience of living with them, in community.

Community, also, is not as easy a concept in our society as we imagine. The sense of the other, which lies at the heart of community, is easily undermined by self-interest and competition. The fabric of relationships that underpin community is threatened by the ‘busyness’ of our culture and by the constant pressures on our time. Too easily we ask what we will get out of community rather than what we put into it. The family meal, Sunday Mass, neighbourhood groups, voluntary community organisations, all may experience such pressures and indeed I would imagine a sociologist could track a similar pattern of decline across all these areas.

And a society that leaves all community building to its governments and bureaucracies, however good they may be, not only sells itself short in terms of potential resources and creativity, but also weakens its very sense of community. If this trend is unchallenged we run the risk of leaving our young an impoverished experience of community, almost a vacuum, where virtue and values are relegated to distant recesses.

Similarly, our sense of moral clarity leaves us as a society in an ever deepening shade of grey, in which virtues are undervalued or eroded. Sociologist Hugh Mackay, for example, argues ‘that we are losing our sense of moral clarity — our confidence in making moral choices’. A respect for others and the values of tolerance are integral to a pluralist society such as ours. But by themselves they are not enough. The pace of change in family and social relationships, in business and in biotechnology, is such that considered reflection and moral decision making are being left behind. Polls, money and expediency seem often to be determinative of actions. And the institutions that traditionally offered moral guidance — the legal and political system, the church and their leaders — are no longer trusted implicitly. School communities do not remain unaffected by such pressures.

When the college focuses on the courtesy extended by our boys to fellow travellers on public transport, or on the need to show respect for the property of another, or on the responsibility we all have to stand up for what is right, we are not just talking about rules and laws, or about the school’s image: we are contributing to, or detracting from, the soul of our society. We are going also to the character of the young people we are forming. More importantly, when we extol the virtue of respecting difference, or encourage generosity in participation, or emphasise the values of sportsmanship, or having a spirit of thankfulness, we are talking about more than behaviour: we are speaking about the heart of a culture and the type of world we wish for ourselves and those who follow us.