An engrossing history of Newman College

This is more than a chronicle of heroes and characters. In identifying the important recurrent issues met in life at Newman and in evaluating what was done well and not well at each period, the writers make strong judgments. 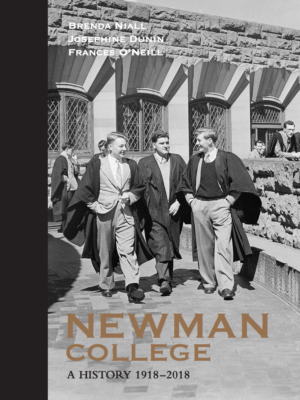 In this engrossing and splendidly presented history of Newman College by Brenda Niall, Josephine Dunin and Frances O’Neill, Niall remarks that institutional histories are a challenging genre. A moment’s reflection suggests why this may be true in the case of university colleges and schools.

They serve a very large number of students for relatively short periods of time. The college authorities that commission the work naturally hope for an endorsement of their work. The fundraisers will eye it as a marketing tool.

The readers, most of whom are or were associated with the college, will first search the index to see if they are mentioned, and then seek validation of their experience. These pressures push for a glossy and bland in-house chronicle of the great and good.

She pays attention to the changing composition of the student body and the variety of the students and their various approaches to college life. She also attends to the changing contexts that defined the college: the Catholic Church, the two great wars, the depression and the expansion of tertiary education, especially for young women.

Through this complexity she constantly returns to the founding ideal of forming Catholic leaders in the professions and public life and to the ways in which students experienced life at Newman. The skill and patience of the editorial team allow her to describe vividly that experience through representative voices of each student generation as they reflect on the college life of their day with its lights and shadows.

Newman College: A History is more than a chronicle of heroes and characters. In identifying the important recurrent issues met in life at Newman and in evaluating what was done well and not well at each period, the writers make strong judgments.

Although gently expressed out of a proper understanding of human limitation, they are neither softened nor avoided. Most notably they allow a discerning eye full of freedom when covering the most recent period in Newman history. In this Niall, Dunin and O’Neill enjoyed the complete and unconditional support of the college authorities.

A recurrent theme of the history is the college culture, and particularly its initiation practices and cult of alcohol. These illustrate the tension between the professed and latent values of the college.

From the beginning initiation was controversial. For a minority of students it could sour their memory of Newman. My father, a country boy who remained grateful to Newman for his university education, never forgot the humiliation of his initiation and retained an abiding lack of respect for those later medical colleagues who had sadistically inflicted it.

Niall documents the different attitudes to initiation, and the varying attempts in the college to control it and to encourage responsibility in the consumption of alcohol.

Niall sets these practices and the cult of sporting success within the transition of boys into adults within a partially self-managing community, a passage marked necessarily by experiment and learning from mistakes.

She also attends to the growth to equal participation of women and men in higher education, and to the change from a Catholic Church in which the continuing allegiance of young people could be taken for granted to one in which it involved personal choice.

These changes led in practical terms to a co-residential college and to a deliberate and broad focus on faith development. More deeply they have fostered a different imagining of the college community. These changes are explored sensitively.

Niall has successfully addressed the external difficulties in writing an institutional history that is engrossing and challenging. But one imagines that as a biographer with a keen eye for the significance of small details in personal stories she would have found this genre particularly frustrating.

Time after time she describes the part that individual Newman students played in college life and mentions their later occupation. Occupations are necessarily a fog that conceals the human mystery behind them and the distinctive path that the person took to them.

For a biographer it is surely difficult to have space to describe only people’s starting point and their destination. So many stories of their lives after university would enrich their human journey.

Niall gives some space, for example, to the charismatic Ray Triado at college and his subsequent apparently uneventful legal practice, mentioning in passing his involvement in the Catholic commune at Whitlands.

Irrelevant to the Newman story, but irresistible to any writer’s imagination, is Triado’s attempt to address the bitter cold of Whitlands by getting his hands on an ageing steamroller that could be used as a generator and driving it up the highway towards Whitfield, only to have it permanently and definitively blow up on the way.

In a disciplined history, however, stories like this must be foregone.

To do justice to an institutional history really requires a baggy monster of a novel, with a cast of thousands, which traces the patterns of their interconnected relationships over four generations. The great merit of this centenary history by Niall, Dunin and O’Neill is that it gives us so much and leaves us longing for more.