The English language version of the esteemed Italian Jesuit periodical was launched along with new translations in Spanish, French and Korean during an event at the Vatican in February. 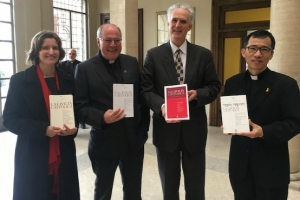 The Italian language periodical has been published by the Jesuits in Rome since 1850 and recently celebrated its 4000th edition.

UCAN’s English language version was launched along with new translations in Spanish, French and Korean during an event at the Vatican in February.

Australian Jesuit Fr Michael Kelly is the Director of UCAN, and has been one of the main drivers in making the English edition possible.

A copy of the magazine was presented to Pope Francis during the celebrations.

The Pope described La Civilta Cattolica as ‘the only magazine of its kind in its service to the Holy See. May it continue to be a bridge-builder, at the frontiers and a journal of discernment.’

The launch of the English language monthly, to be published in print and electronic forms, is the culmination of six months work setting up the translation, editing, production and marketing.

This first edition in English contains material of broad interest to anyone following developments in the Catholic Church especially during this time of significant change.

This includes the record of a wide-ranging discussion between the Pope and the international leaders of the church’s religious congregations, an extended interview with Silence filmmaker Martin Scorsese on the faith and imagination that guides his work, and a moving biography of Dom Helder Camara.

The English edition, by UCAN, appears at the same time as the other non-Italian language editions, produced by two of the leading Catholic publishing houses in the world: Herder in Madrid for the Spanish edition and Parole et Silence in Paris for the French edition. The Korean language edition is edited by the Korean Province.

These developments are part of an ambitious global publishing strategy conceived and developed by the editor-in-chief of La Civilta Cattolica, Fr Antonio Spadaro SJ. The 50-year-old Sicilian is considered among the closest people to the present Pope and a key commentator on his priorities and reforms.

‘The multilingual dimension will not leave the identity of the magazine itself unchanged’, said a statement from La Civilta Cattolica, ‘precisely because, having readers in other languages and the demands of other countries and cultures will become part of its heart like never before.

‘Pope Francis, since his election in 2013, has instead relaunched and enriched the mission of the magazine … synthesising it with three key words: dialogue, discernment, frontier. For La Civilta Cattolica these three words have become a program to implement with faithfulness and attention.’

To look more at the new English product, visit www.laciviltacattolica.com