Invited by the Vatican Dicastery for Laity, Family and Life, Fr Justin Glyn SJ recently attended a meeting in Rome to help finalise a report discussing a broad range of theological issues relevant to disability for the Synod on Synodality.

At the invitation of the Dicastery for Laity, Family and Life, I was one of five people who attended a meeting in Rome (from 19-22 September) to finalise a document for the Synod on Synodality to be held next year. The Dicastery had begun a “listening exercise” in late May, in the shape of a Zoom conference of disabled people from around the world. The submissions that this group had made had then been collated into a single document which we were to finalise for the Synod and for the Pope. This discusses a broad range of theological issues relevant to disability – critiquing the traditional theology which has traditionally viewed us as either tainted by original sin or “suffering angels”, noting difficulties in accessing the Sacraments, and opening up a more inclusive vision of Church, amongst other key points.

While the resultant submission contains much that is new, its main value is that it is the first Church document on disability to actually be written by those of us who experience it. The submitters included people with physical, sensory and intellectual disabilities from a variety of places and language groups – as did the final drafting group (which consisted of a French religious sister with Downs syndrome, a wheelchair-using Italian academic, a deaf catechist from Mexico, a Spanish disability rights activist and a blind NZ Jesuit from Australia). We owed a great deal to the incredibly competent team from the Dicastery, which provided meeting and conference facilities as well as a breathtakingly competent team of interpreters providing simultaneous output in five languages. 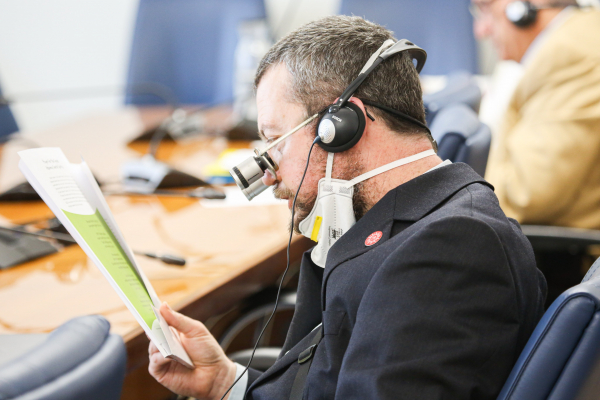 The following days saw intensive photoshoots for a series of video documentaries to be launched on 3 December (which is not only the Feast of Francis Xavier but also the International Day of Persons with Disability). In each of them, participants were invited to give their world views and perspectives on disability and the Church.

Key to all the presentations was the understanding that the Church cannot separate out disabled members as recipients of charity. Rather, it is a broad “us”, all of whose members will experience the limits of a common humanity at some point in our lives. This dovetails neatly with the second Universal Apostolic Preference of the Society – the marginalised are our priority precisely because the margins are artificially created human barriers which wall people off from people and ignore our common membership in the Body of Christ. 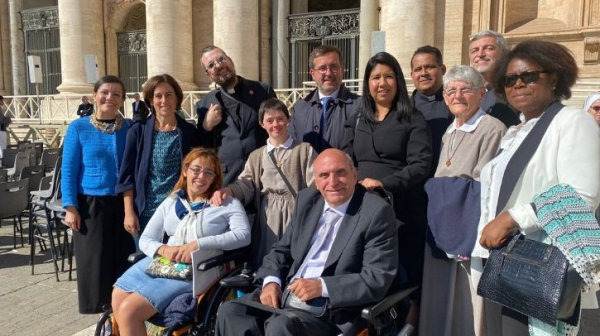 Fr Justin Glyn SJ (back row, third from left) with other disability delegates from the Catholic community. Photo: General Secretariat of the Synod.

Australia is not immune from these issues. While my own education, gender and background privilege me in many ways, my disability has caused me to be spat on in the streets, insulted and patronised rather more often than I would like to remember…. Many others (as the current Royal Commission on Disability is hearing even now) have experienced far, far worse, including unemployment, sexual violence and physical abuse. Sadly, the abuse crisis in the Church has affected disabled people as well – leading to the creation in canon law of a new category of “vulnerable persons” to combat such abuse.

Our submission to the Synod is therefore a broad-ranging call to conversion. In the final analysis, our Church is one in which all are called to be both agents and recipients of the love of Christ – a mutually supportive community which walks together on the road with our God. 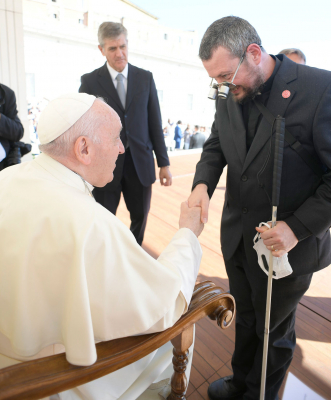 Read The Church is our home document submitted to the Synod.

Find out more from Fr Justin about this event from the Catholic News Agency’s article.