East of the River Jordan

Fr Steve Curtin S.J reflects on his time spent working in Jordan during his sabbatical. He worked with Jesuit Refugee Service and spoke about the importance of standing in solidarity with the excluded.

I had planned to spend Holy Week this year in Jerusalem, however this wasn’t to be, but I was able to spend six months prior to Easter on the ‘far’ side of the Jordan River in the Eastern part of the Holy Land in Amman, the capital of The Hashemite Kingdom of Jordan.

I was in Jordan to support the work of the Jesuit Refugee Service (JRS) in aid of refugees and asylum seekers there. The refugees came from many places including Syria, Iraq, Somalia and Sudan. As the Covid pandemic continued to unfold I never did get to Israel and the West Bank as I had planned but that didn’t matter. With the pandemic wreaking havoc in Jordan I wasn’t able to help JRS quite as much as I had hoped either, but that also didn’t seem to matter very much. What matters is that refugees have friends to advocate for them and remind them that they are not forgotten. It’s important that there are people ready to serve refugees and help them find the psycho-social support, health care and education that they need. It’s a great privilege to accompany refugees and through being present speak to them of the healing love of God and show them that they are valued and gifted members of God’s family with their own contributions to make to the future of the world. Perhaps this mattered even more during a global pandemic. 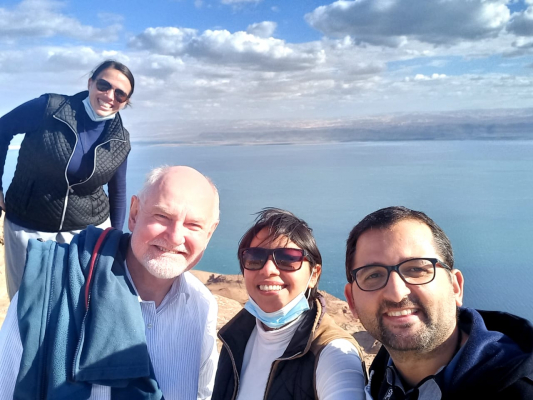 Comboni Sisters and Jesuits on the Eastern shore of the Dead Sea. Jerusalem is in the distance 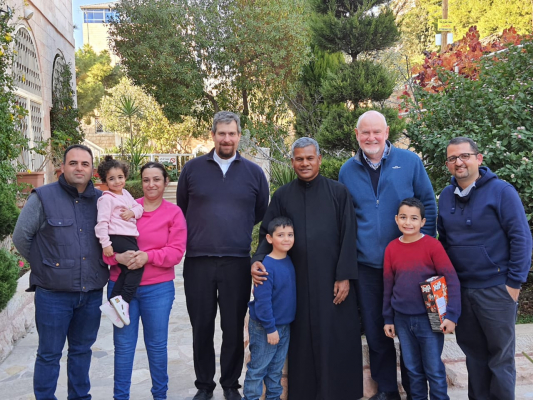 Many stories of war, famine, suffering, grief and exile populate the memory of the human family. Many such stories are found in Christian and other holy books. I think especially of Psalm 137 which tells of the Israelites who wept while in exile by the rivers of Babylon. To be a refugee frequently involves great heartbreak and trauma. I heard stories of these things from the young refugees in my English class. I also witnessed their love of life, their hope, their resilience, their faith in God and their kindness to one another. I witnessed a lot of sadness and I witnessed a lot of beauty. I also witnessed a lot of history. 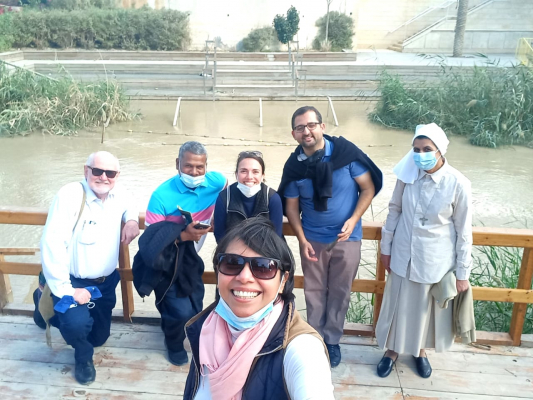 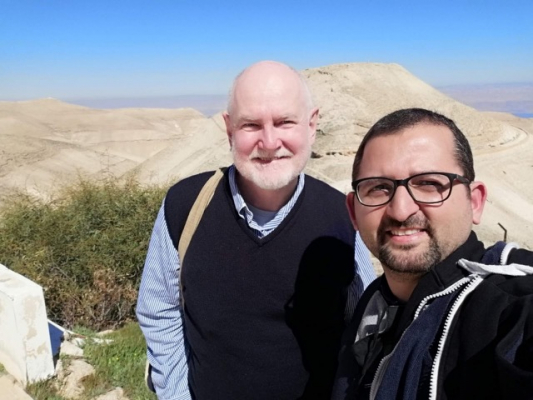 Fr Steve Curtin S.J. and Scholastic Moayad Maayah S.J. on a visit to the ruins of the palace fort, The Machaerus, 60km across the Dead Sea from Jerusalem, in modern day Jordan, where John The Baptist was imprisoned and executed

Christmas with new friends in Jordan was a special time for me, celebrating God here among us. Towards the end of my time in Jordan I got sick with Covid. I am grateful for the good medical care that I received and especially grateful for the love and concern shown by so many people in Jordan and at home in Australia. During my convalescence I had more time to pray and reflect. In isolation I felt God very close to me. It was a strangely beautiful experience. St Ignatius said that God deals with us as a teacher teaches a student. I experienced this quite often during my time in Jordan. In the cradle of Christianity I learned a little more about myself and about God and my faith was deepened.

When Easter came I was in London waiting to see if I might get to Jerusalem later, on my way home. While there I learned of the deaths of two very different Phillips. Prince Philip Duke of Edinburgh and my Jesuit friend Phil Crotty of Australia and India. In London, in the shadow of these two not untimely deaths and many thousands of untimely ones around the world, and in the shadow of the suffering I had seen in Jordan, I celebrated Christ our light at Easter. God suffers and dies with us and rises. I came directly home at the end of May with good memories, with love for new friends in my heart, feeling renewed and a little more free.