Disturbing the dust in India and Australia

In Disturbing the Dust, Fr Tony Herbert SJ gathers many memories and reflections on his more than 50 years of life in India, particularly living among the Dalits, the ‘untouchables’, writes Fr Brian McCoy SJ.

Last week I was in Sydney for the launch of the book Disturbing the Dust, written by Fr Tony Herbert SJ. 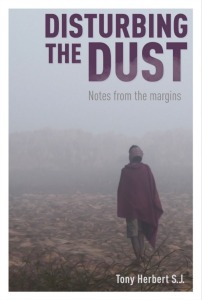 The evening, at the Ron Dyer Centre in North Sydney, brought together friends and supporters of Jesuit Mission, many of whom have visited or financially assisted the work of Australian and New Zealand Jesuits who went on mission to India many years ago.

Tony was a Jesuit scholastic when he sailed to India in 1965. His book gathers many memories and reflections on his more than 50 years of life there, particularly living among the Dalits, the ‘untouchables’ who remain on the bottom rung of Indian society.

His use of the word ‘dust’ evokes many images. He mentions the dust of village India, the dry open fields where people live simply, close to the earth.

There is also, ‘the dust of our humanly created poverty’, where people belong to systems that continue to oppress and enslave them. And, there is the dust of human frailty, our own personal, human limitations in the face of the ‘other’.

His writing is clear, humble and honest. He evokes the ‘dust’ of people’s lives where people cannot imagine being anything more than who they are seen to be: inferior, lower, never to change or be changed.

But he does not resile from his own ‘dust’, as a foreigner and stranger in this land he has given his life to; he reflects on his own faltering, but life-giving, commitment to those who sometimes struggle to believe they are worthy of his companionship.

I first thought this would just be an interesting book describing a fellow Jesuit’s life in India. I later came to realise it was much more than that. In his writing Tony was disturbing more than ‘dust’; he was disturbing me as well.

Like the best of Ignatian contemplation I found myself drawn again and again, chapter by chapter, back to consider the ‘dust’ that swirls around and envelops people’s lives.

How do we participate in relationships where people have internalised and believe they are somehow ‘lower’ than ourselves? What of our positions of power and privilege where we allow ourselves to be seen as ‘higher’?

We live in an Australian context where ‘disturbing the dust’ is both grace and needed.

The Melbourne launch of Disturbing the Dust will take place at Xavier College on Wednesday 20 September. Details

The book can be purchased here.