The crackling shock of scriptural images

‘Images and stories are windows into the infinite value of God’s world. This book adds nothing to the images but expands the reader’s capacity to gaze through their windows.’ Fr Andrew Hamilton SJ reviews Moments of Grace: Daily Inspiration from Isaiah to Revelation, by Fr Gerald O’Collins SJ.

It is a commonplace of communication that one good image is better than a thousand words. Images have an unrivalled power to connect things. They help us to see the familiar in a new way. When grappling with the death of someone we love, for example, we might find illumination in the sight of a young woman nursing a baby. The juxtaposition of death and new life can open for us the depths of the tender and implacable mystery of life.

Scriptural images and stories also make connections, often in surprising ways, and have become incorporated into popular speech. Think of such phrases as the prodigal son, good Samaritan, the mark of Cain, the better part, 30 pieces of silver, the wisdom of Solomon, to name just a few. People who have never read the Scriptures often use these phrases without reflecting on the images or stories behind them. 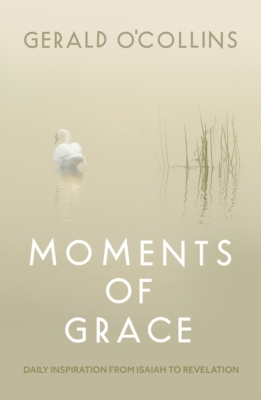 As images become familiar the connections that they make can cease to surprise. We might hear Jesus’ remark that we are fortunate when we are persecuted without being shocked as Jesus’ hearers surely would have been. The blinding surface of newly minted words becomes dim with use.

Gifted Christian preachers and writers can recover for us the crackling shock of images when they were first used, and so connect them with the depths of our own experience. There are two ways in which they can do this: by revisiting the Scriptures to show the impact the image would have had on its first readers, or by exploring modern resonances of the image to reproduce its effect in our own world.

In Moments of Grace Fr Gerald O’Collins SJ sets out to place significant scriptural images and stories in their scriptural context. He also illuminates them by referring to people, scenes and writings of our own day in reflections that lead the reader into prayer.

His attention to the small details of scriptural stories often reveals a depth we do not at first see. His comparison of the calling of the 12 in Matthew and Mark, for example, points out that Matthew takes pains to say there were two pairs of brothers: Peter and Andrew, and James and John. The risen Jesus later tells the women at the tomb to tell his brothers to go to Galilee where they will see him. We are all Jesus’ brothers and sisters.

O’Collins evokes the power of images by drawing on his own experience. He does this particularly when writing of Jesus’ appreciation of nature. In describing Mark’s image of the growth of the harvest, he says, ‘In a few months, at the back of my college, roses will bud and come into flower. An oak tree will soon look gloriously green again. In the vegetable garden, lettuce, onions and beans will flourish. Spring growth will be on the way.’

This lovely paragraph fills out and enriches Mark’s image of the man who ‘scatters seed upon the ground, and sleeps and wakes night and day, while the seed sprouts and grows, he knows not how’.

He draws on encounters with people in teaching and travelling, on stories of the people whom he has met and on his wide reading and appreciation of the arts. These link Gospel stories both to the everyday domestic incidents of our own lives, and also to the wider and often tragic world of starvation, persecution and war from which our lives are fortuitously sheltered. They allow us to appreciate more deeply the consolations and the challenges of the Gospel.

We might be tempted to use a fashionable commercial image and say that O’Collins adds value to the Scriptural images. But that would be misleading. Images and stories are windows into the infinite value of God’s world. This book adds nothing to the images but expands the reader’s capacity to gaze through their windows.