Congratulations to Dr Miriam-Rose, Senior Australian of the Year

“She has continued to call us all to a deep, attentive listening to the other and to creation.”

“She has continued to call us all to a deep, attentive listening to the other and to creation.”

Last week, Dr Miriam-Rose Ungunmerr Baumann AM was named the 2021 Senior Australian of the Year.

Miriam-Rose has been a friend to Australian Jesuits for many years. In 1986, 12 of us travelled in two minibuses from Sevenhill to Alice Springs where Pope John Paul II was meeting Aboriginal and Torres Strait Islander peoples who gathered at the Centre from all over Australia. We then travelled on to Nauiyu Nambiyu at Daly River to celebrate the centenary of the establishment of the first Jesuit mission there at Uniya by the Austrian Jesuits in 1886.

We were welcomed by Miriam who at the time was President of the local Aboriginal council. She shared with us part of her story, the story of her people.

She told us: “Today, I see my people caught in what I feel is a terrible whirlwind, tossed and trapped in a circle of confusion, frustration, often despair, unable to escape. I myself have been thrown about by that whirlwind. I have felt the confusion, the fear, the helplessness. Yet, in some strange and wonderful way, God is by degrees and ever so gently, lifting me out of the whirlwind.” 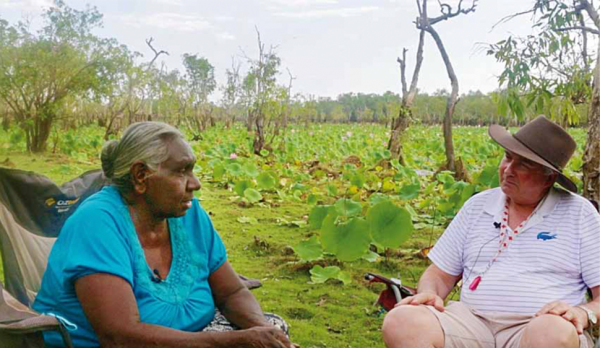 The previous year, many people from her community came to Brisbane for the ordination of Steve Astill and myself. They sang and danced at St Stephen’s Cathedral. Miriam provided the design for my ordination vestment. The design comes from the pulpit painting in the St Francis Xavier Church at Daly River which is replete with a set of the Stations of the Cross painted by Miriam.

In 1989, the Australian Jesuits gathered for the first ever gathering of all the members of the province at Riverview. The theme was, ‘A Province on Mission to the World’. Miriam was commissioned to do a painting for us. She entitled the painting: ‘Uniya – the Jesuit Spirit in this Land.’ The painting was then installed at St Canices at Kings Cross.

When Mark Raper was Provincial, he commissioned Miriam to do a painting expressive of the Province’s mission.

Over the last 40 years, Jesuits including Brian McCoy, Pat Mullins, Maurie Heading, Dave Ryan and I have maintained close relationships with the people at Nauiyu Nambiyu, always being inspired by Miriam’s vision.

Accepting the award in the presence of the Prime Minister on Australia Day, Miriam said: “We learnt to speak your English fluently, walked on a one-way street to learn the white people’s way. Now is the time to come closer to understand us and to understand how we live and to listen to what needs are in our communities.

She has continued to call us all to a deep, attentive listening to the other and to creation. Her term for this is ‘dadirri’. Even the Irish folk singer Luka Bloom has taken up this theme with a song of the same name.

In 2013, Miriam set up the Miriam-Rose Foundation to assist young people in remote Indigenous communities. She was moved to do this after a beloved nephew took his own life in 2009. I was privileged to launch the Foundation in St Mary’s Cathedral in Darwin. I then dedicated my book No Small Change to her nephew and others like him caught between the Dreaming and the Market.

Miriam has a great capacity to transport the listener to the stillness of the water lily pond, no matter what the whirlwind of the moment.

The nation needs to heed her gentle, deep message.