The medals recognise their outstanding contributions, often in unheralded roles, to the mission of the Society of Jesus in Australia and beyond.

The Australian Jesuit Province this week awarded Companions Medals to a number of significant people in the Province. The medals recognise their outstanding contributions, often in unheralded roles, to the mission of the Society of Jesus in Australia and beyond. Thanks to each of them for sharing their time and gifts with us. 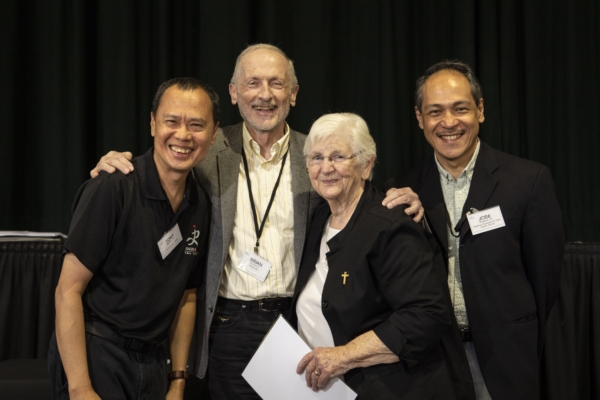 Saint Ignatius’ College Riverview staff member Mark White was recognised for his work in the school, the huge MAGiS08 gathering for World Youth Day and the annual Indian Bazaar, as well as his support for Province events, such as helping to organise Gatherings at Riverview and Canisius over the years. Read full citation

Professor Maryanne Confoy RSC was recognised for her many years as a theologian at Jesuit Theological College and Boston College as well as her ongoing support for Jesuits in formation, both as pastoral director at JTC/Faber House and assisting overseas Jesuits undertaking postgraduate degrees in Australia. Read full citation

Ray and Kath Wood were recognised for their role in helping establish the Basic Eucharistic Community at Saint Ignatius’ College Athelstone campus, and enabling its functioning for over 40 years. Read full citation