In November a new painting by Peter Serwan titled The Crucified Jesus, and a stained glass window based upon it by Frans Kat, were unveiled at St Ignatius’ Church in Norwood, SA. Parish Priest Fr Paul Mullins SJ reflects on the artworks and the significance of crucifixion.

At the noon Angelus on 18 March last year Pope Francis said that the crucifix is for prayer, not decoration. ‘It is not just something decorative to hang on the wall or wear, it is an important sign of our beliefs — and should be truly focused on and prayed before as the source of our salvation …

‘Think to yourself’, he went on to say: ‘How do I look at the crucifix? Like a work of art, to see if it is beautiful or not beautiful? Or do I look inside, within the wounds of Jesus, to his heart? Do I look at the mystery of God destroyed, done to death like a slave, like a criminal?’

A project begun almost two and a half years ago culminated last week with the installation at St Ignatius’ Church in Norwood, SA, of a new stained glass window, depicting Jesus crucified, with Mary and St Ignatius. 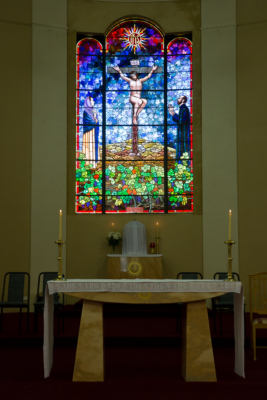 When I met with the artist Peter Serwan to discuss the project, I had certain criteria that were to shape the original paintings. I wanted the scene to reflect Jesus as he was crucified, with his mother and St Ignatius witnesses of the fearful sight.

With regard to Pope Francis’ question above, I wonder how each person gazing at the window looks at the depiction of the crucifixion. Some may find the depiction of Jesus unsettling, even shocking. If so, then the painting by Serwan and the window by Frans Kat have succeeded in conveying something of the shock and horror of the event.

Recently a Jesuit theologian and scripture scholar admitted: ‘I can’t bear to think of the crucifixion.’ It is and remains a shocking event. Unfortunately, we are so familiar with the sanitised version that it has all but lost its impact.

Roman crucifixion was a horrendous form of legal execution. It was reserved for non-Roman citizens. The condemned carried the cross beam to the place of execution, where the victim was either nailed or tied to it by ropes.

The cross beam was then set into a vertical wooden stake. The victim was often seated, or given a footrest, to which his feet were nailed. Victims died from asphyxiation or blood loss. By supporting the victim’s body, the executioners ensured that the death agony was prolonged.

Victims were always executed naked. This added to the humiliation and shame of the victims. The Gospels attest to Jesus being stripped.

For the people of Jesus’ world, the cross was a repellent symbol, a horrifying means of inculcating fear, reflecting the power of the state over life and death. It was the ultimate mark of disgrace and degradation.

To complete the picture, we are informed in Mark’s Gospel that Pilate affixed to the cross above Jesus’ head the words Rex Judaeorum: ‘King of the Jews’. This served as a warning to any contemplating revolt against Roman rule.

Some years ago, the Christian faithful and others were divided over Mel Gibson’s film The Passion of the Christ. The film provoked a range of responses: it was too violent; the director was a reactionary Catholic; the film was anti-Semitic; it portrayed far too realistically the events of Jesus’ death.

Whatever of the validity or otherwise of the criticisms of the film, what is evident is that the events of Jesus’ suffering and death and how they are depicted promote passionate responses. I am not promoting Gibson’s film, but I do think that the savagery and horror of the crucifixion as depicted in the film captured in some way the awful reality of the event.

If we turn then to the stained glass window, I believe there is something beautiful about this piece of art. I also think it gives us much on which to reflect. Note Mary’s gaze. What would have been going through her mind? One can scarcely comprehend the grief she experienced as the mother of her suffering and dying son.

A pivotal moment in the life of Ignatius was the vision at La Storta. In 1537 at a tiny chapel some kilometres from the city of Rome, Ignatius had a profound and deeply moving religious experience. While preparing for his first Mass he had prayed constantly, begging Our Lady: ‘place me with your Son’.

At the La Storta chapel, Ignatius seemed to see Christ bearing the cross on his shoulders and the eternal Father nearby who said to Christ: ‘I want you to take this man for your servant’, and so Ignatius envisioned Jesus saying: ‘I want you to serve us’ — hence the reason for Ignatius’ presence in the stained glass window.

Over two years ago, I was honoured to have been approached by Fr Paul Mullins SJ to create a lead-light crucifixion design.

Among the criteria of the brief was that the image of Jesus be naked. Although we know the Romans carried out crucifixions in a most gruesome manner, what is not commonly known was that their victims were naked to emphasise their degradation. 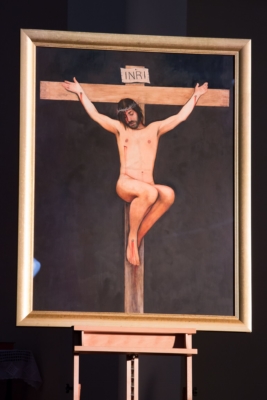 Furthermore, the design was to feature grape vines and branches. The border was to contain images of the pomegranate. The side panels were to depict Mary, the mother of Jesus, and St Ignatius of Loyola.

Generally, I was concerned with how to create a contemporary and distinctive work on a very traditional theme. I wanted to create art that was sensitive, however, with a pensive, brooding mood prevailing through the treatment of the sky.

The moment that is conveyed in the window is one of deep emotion and grief, especially for Mary as she gazed on her crucified son. Consequently, I wonder what would have been going on in both the minds of Mary and Ignatius at that moment.

Furthermore, I was mindful of the need to depict bunches of grapes as symbols of the Eucharist; the grape vine is used as an emblem of the Saviour in the parable of the ‘true vine’. The beautiful and varied grape leaves were also intended to enhance the aesthetic appearance of the work. The pomegranate images symbolise the resurrection.

Pomegranates already symbolised fertility, beauty and eternal life in Greek and Persian mythology. I think Frans Kat, the stained glass artist, has brilliantly interpreted my creation with painstaking precision, resulting in a striking work made up of over 2500 individually hand-painted pieces of coloured glass.

The Crucified Jesus, the original oil by Peter Serwan, was donated by Humphrey George AM and family in memory of Beryl Margaret George. The stained glass Christ designed from the painting by Frans Kat would not have been possible without the generosity of the late Sheila Mills, whose bequest funded the project.