Celebrating the 150th anniversary of the arrival of Fr Leon Rogalski SJ, first chaplain to a migrant community in Australia

“Through his work, the faith was handed on and down to generations around us. His love of Christ and burning zeal kindled that faith and love of God in so many who followed, and hence we are here today at this Eucharist.”

On the sandstone walls of St Aloysius Church in Sevenhill hangs a beautiful painting of St Stanislaus Kostka with the Christ Child.

The painting is believed to have been brought to Australia by Fr Leon Rogalski SJ, a Polish Jesuit who in 1870 migrated to South Australia to serve the growing Polish community.

Upon his arrival, Fr Rogalski established the first Polish chapel in Australia, St Stanislaus Kostka in Polish Hill River, and hung the painting of the Polish Jesuit saint on its walls. It was here that Fr Rogalski provided pastoral care to generations of Polish, German and Irish migrants, creating a lasting legacy of community and service.

In a weekend-long celebration of Fr Rogalski from 13-14 March, descendants of the first Polish migrant settlers together with members of the Polish, Clare Valley and Jesuit communities gathered at Polish Hill River to acknowledge the 150th anniversary of his arrival. Many of those attending journeyed across state borders to be present, including a pilgrimage from Melbourne led by Polish Jesuit chaplain Fr Wieslaw (Tony) Slowik SJ. 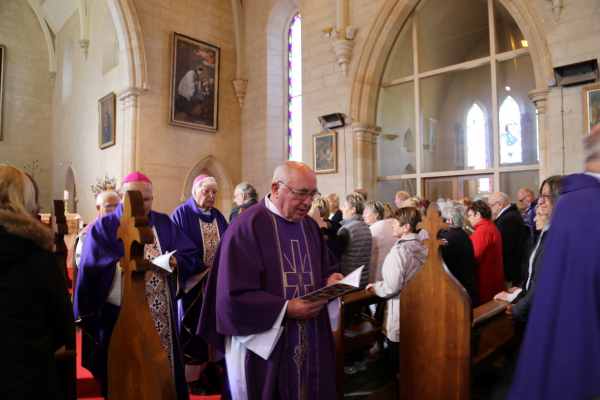 The celebrations began outside the restored St Stanislaus Chapel at Polish Hill River, where Fr Michal Skiba SChr prayed the Stations of the Cross before an official opening by the Governor of South Australia, His Excellency the Honourable Hieu Van Le AC, followed by a Solemn Mass concelebrated by Bishop Emeritus of Port Pirie, Gregory O’Kelly SJ, Archbishop Patrick O’Regan and Bishop Karol Kulczyncki SDS, together with priests from Adelaide, Sevenhill and Melbourne. The ‘Polanki’ Choir from Ottoway sang hymns in the Polish language, and members of the community, young and old, donned traditional dress.

“It is only fitting that on this occasion, the celebration of Leon Rogalski’s arrival, a copy of this original painting be returned to those who have continued to care for this memorial of the first Polish community in Australia,” Fr Brian McCoy, the former Australian Jesuit Provincial, said.

“So today we bring back Stanislaus to you as a gift, and we thank you.” 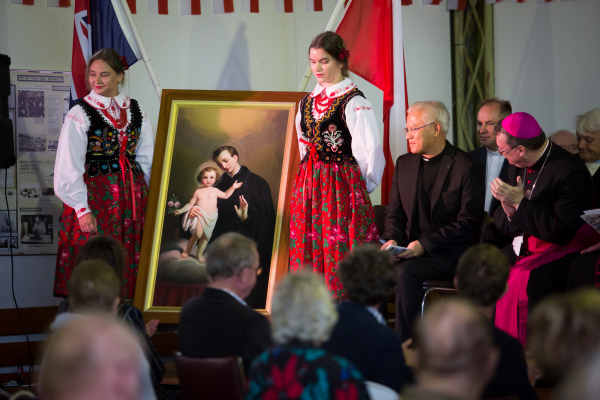 Bishop Gregory O’Kelly SJ delivered a moving homily during the service, honouring the gifts of Fr Rogalski to the Polish, Jesuit and Clare Valley communities.

“Fr Rogalski may well have worked to create a ‘little Poland’ down here, as has been said, but that would be a shallow assessment of the life of this man whom we commemorate today,” he said.

“Through his work, the faith was handed on and down to generations around us. His love of Christ and burning zeal kindled that faith and love of God in so many who followed, and hence we are here today at this Eucharist.”

“He lived the words of the Psalm we read in the Mass today:

The Lord is our help and our shield

May your love be upon us, O Lord.”

Following the service, those gathered enjoyed paczki (Polish donuts) and coffee in the brisk outdoor weather, while indoors, traditional kielbasa (sausage) and kapusta (cabbage) with rye bread were enjoyed at communal tables. Later in the afternoon, the haunting sound of Gorzkie Zale, a Polish Catholic devotion of sung lenten lamentations, filled the historic chapel before pilgrims visited the historic Sevenhill cemetery and Fr Rogalski’s final resting place, in the crypt at St Aloysius Church, the following morning. 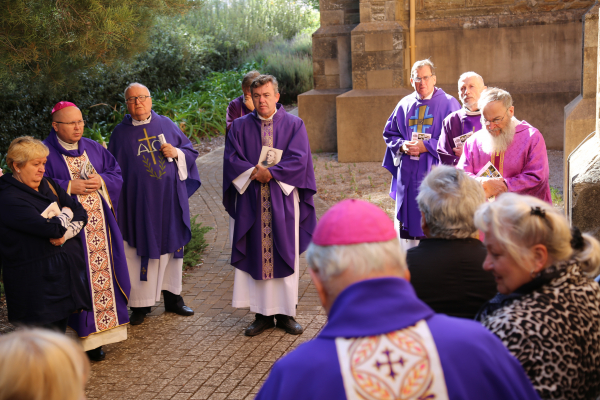 The Clare Valley has a long-standing connection to the Society of Jesus (Jesuits) and the Polish migrant community in Australia. Today the grounds are home to Sevenhill Cellars, the oldest winery in the Clare Valley, St Aloysius Church, and a retreat centre, the heart of Jesuit and Ignatian Spirituality Australia (JISA), which offers a range of formation opportunities, including silent retreats.