This February, 12 Australian Jesuits are celebrating 50, 60 and 70-year jubilees.

I have just returned from visiting Paul Gardiner. On 20 January he celebrated his 93rd year, 76 of them as a Jesuit. 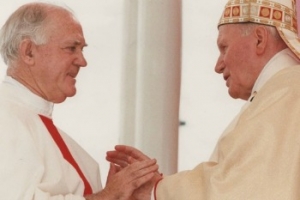 Paul has been living in Penola since 1999, witnessing to a long and special friendship with our first Australian saint, Mary MacKillop — firstly, as the Postulator for her cause (1984–2008), and then as chaplain to the Mary MacKillop Centre in Penola.

He now rests from his labours in the Pinchunga Hostel in Penola.

The month of February is a special one for many Jesuits as they — at least in this part of the world — celebrate their anniversaries of becoming Jesuits. This February, 12 are celebrating significant jubilees — 50, 60 or 70-year jubilees. A total of some 730!

Like Paul Gardiner, our Jubilarians continue to offer many wonderful and diverse gifts to our Jesuit company, church and world.

As we give thanks for them we might also remember their friends, their families and the many who, in turn, have shaped and blessed them.

All of those we are celebrating this year have been, at some stage of their Jesuit lives, preachers and teachers. Some, like Paul Gardiner, have also been writers, poets and publishers.

Recently, Pope Francis met with the Jesuits who write for La Civiltà Cattolica, a Jesuit magazine founded in 1850 and currently celebrating its 4000th edition. It is now translated from Italian into English, French, Spanish and Korean.

The Pope told them that ‘to be a Catholic Review does not mean simply that it defends Catholic ideas, as if Catholicism were a philosophy. As your founder, Father Carlo Maria Curci wrote, La Civiltà Cattolica must not “appear as something of the sacristy”.

‘A Review is truly “Catholic” only if it has Christ’s look on the world, and if it transmits and witnesses it.’

Vatican Radio in its report on this event paraphrased the idea thus: ‘Your writing must not just defend Catholic ideas, but must witness to Christ in the world with a restless, open-ended and imaginative spirit.’

Such was the long labour and love of Paul Gardiner’s work in promoting the life of Mary MacKillop.

Pope Francis also referred to the importance of imagination and humour.

So, before I left Paul on the weekend, I asked him if there was anything I could do for him when I returned to Melbourne.

I was thinking of his extended family, his library, the many who have cared for him over his years in Penola and those Jesuits he has worked with in Rome, New Zealand and Australia.

‘Just don’t let Collingwood win the Grand Final!’ was his reply. Clearly, as a long-standing South Melbourne/Sydney Swans supporter, he has managed to keep, along with his other fine gifts, a good sense of humour.