Fr Willcock turned 70 early this year, and musicians from far and wide gathered to perform his compositions, replete with replete with brass, organ and drums.

On Saturday 3 June 2017, a Pentecost Vigil Mass was celebrated at St Patrick’s Cathedral in Melbourne, featuring and honouring the music of Fr Christopher Willcock SJ, to mark his 70th birthday. 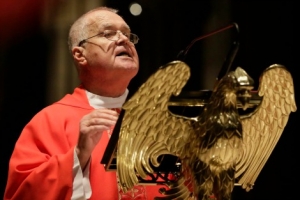 A renowned Jesuit priest and composer, Fr Willcock turned 70 early this year, and musicians from far and wide gathered to perform his compositions, replete with brass, organ and drums. Fr Willcock himself delivered the homily during Mass.

I was honoured but somewhat bemused when Chris some weeks back asked if I would say a few words at this function. I have no claim to authority in the area of music or liturgy. I have occasionally sung under Chris’ baton — though, rightly, never been invited to step out from the chorus. But, being of a certain age, I could hardly, like the prophet Jeremiah, protest, ‘Nay, Lord. I am a boy and cannot speak.’

I was sitting with Chris at lunch recently when he mentioned how much he had enjoyed the musical My Fair Lady currently playing at the Regent. He added a remark about the quality of Frederick Loewe’s musical score.

Then I thought, here am I sitting most days at lunch with an artist who can match it with the best of them — and it’s no big deal, because Chris never asks for special consideration because of his talents or for all that we owe him for the unique contribution he makes to our life. And yet it is a big deal! It is very important that every so often we should stand aside and recognise the artist we have in our midst.

So it is wonderful that Tony Way and Paul Taylor, with the very willing cooperation of Fr John Salvano [Dean of the Cathedral], the St Francis’ Choir, and other musicians, have organised this Pentecostal (I speak in the liturgical rather than the charismatic sense) tribute to Chris and his liturgical music — and that we can rejoice to have heard it performed at the high quality of musicianship it deserves.

This evening we have heard a festal performance of Chris’ liturgical music. But, as we are all aware, Chris has been equally prolific and won similar acclaim in the wider musical field, though I hesitate to call it secular. It is natural to place his output in those two categories. However, in his case it is not a distinction that we should press too far. His music touches depths of the human spirit where the barrier between sacred and secular falls away.

Some years ago Chris gave a lecture in Sydney, subsequently published (in the theological journal Pacifica), in the course of which he praised the contemporary Scottish composer, James MacMillan, for successfully combining the other-worldly with the this-worldly, in which, ‘as he calls it, “the grit and mire of daily existence” is shown to be touched by the Incarnation.’

That ‘sacramental’ note, as we may name it, is equally to be heard in Chris’ music. And it explains why there has been such a ready interface between music and poetry in his work. He has a keen ear to hear the music and the human utterance — whether of pain or joy or whatever — in the poetry of the great Ahkmatova or Gwen Harwood, Didier Rimaud or Peter Steele, but also in that of the Psalmist and the great Latin hymns, like the Veni Sancte Spiritus, and to recreate the biblical Lamentations in response to massacre and destruction in a small island nation off our north-west coast (‘Lament for Dili’).

And closer to home we can think of his collaboration with our two Andys, Bullen and Hamilton, producing work that both delights and weaves together the biblical and the contemporary stories of displacement and quest for asylum in a flawless musical whole.

In this connection let me recount a reaction to the first — which we hope will soon be joined by a second — performance of the Akhmatova Requiem. After the performance two Cambodian women approached Chris with tears in their eyes. He was amazed that the story of Stalinist Russia could have had such an effect on two people quite removed in time and place from the events evoked in the Requiem. ‘No’, they said, ‘it was not the story of Russia we heard. What we heard was our history under Pol Pot.’

As Chris commented, ‘They had “understood” the music. It had put them “in touch” with that which transcends the sayable, outstrips the analysable.’ Here the best of music designed for worship and music created for life beyond it run together in sacramental mode.

I have to leave it to musicians to truly assess the worth of Chris’ music. I can, however, speak with some authority, as a colleague, on the contribution he made to our philosophical and theological faculty at Jesuit Theological College over many years. If I’ve been rather solemn and serious in my words up till now, let me alleviate that by saying that his capacity for celebration was by no means liturgically confined and, in combination with the late Arnold Hogan, could fast verge upon the riotous.

But it was wonderful that Chris would broaden out the efforts of us more cerebral wonks with the artistry of his music, his teaching and practice of liturgy at its best, and the hospitality and generosity of his person in so many ways.

For the occasion of his priestly ordination in Armidale, 40 years ago in December, one here present — though wishing to remain in the background for the moment — composed a poem that has proved to be as prophetic as it was apt for that time and indeed this present Pentecostal season. Let me conclude by reciting it here before you all.

All flesh is sorrowful:

music and the pain tell us so,

Without music our pain

is paralysed in mute dismay;

flesh and blood can only groan.

From words of pain we wince away,

until the sorrow aches

as music speaks its healing word

to exorcise the pain;

for at the touch of music,

austere yet lambent, our flesh

knows the ache is the pulse of life,

names in tones of sorrow.

But music too, bereft of pain

is held in rigid trance,

unless a flicker of pain

How else can music catch

from flesh and blood its plangent theme?

Voicing its pulse of pain

in harmonies of dancing flame,

music sings as if inspired:

All flesh is fire held in time;

for music, when it speaks,

speaks in tongues of fire.