Caught in the waves: Sculpture recognises cries of abuse survivors

‘The waves stand as testament to the survivor’s cry, a cry not insubstantial but as big as the ocean, and one we are all responsible for hearing and bearing.’

St Ignatius’ College Riverview has installed a new work of art in its Rose Garden, the sanctuary created in recognition of students who were abused during their time at the College. 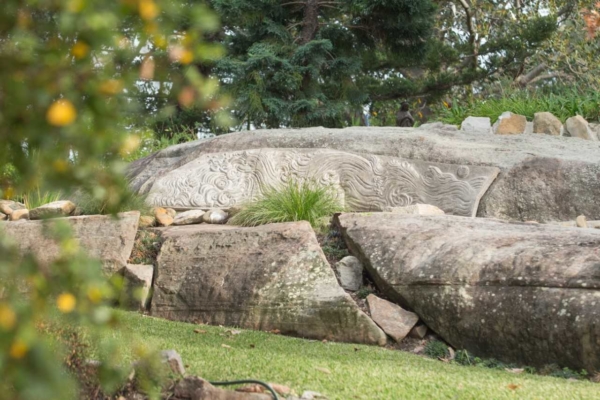 The artwork was installed alongside the public apology plaque in the Rose Garden, which was established at the school in 2016.

The artist, Daniel Dominguez, who graduated from the College in 1989, described the artwork:

‘This sculpture acknowledges the abuse that has occurred at the school. The story is communicated through the simple motif of the force and resistance of water. Caught in these waves is the crashing of values, of power misused and innocence abused.

‘This is a story about resistance and survival in the face of despair, about the struggle to overcome bullying, persecution, violence and all forms of abuse. This is the story of the survivor who fights to rise above malevolence, anxiety and cruelty.

‘These are the waves of suffering, of those who put their love and trust in others and were cast into chaos; that we may embrace their pain to the centre of our community, just as each wave is connected to the greater movement of the sea.

‘This is a story that ends in hope for peace, of calmer seas to allow the pain and suffering to be recognised, cleansed and healed.

‘The waves stand as testament to the survivor’s cry, a cry not insubstantial but as big as the ocean, and one we are all responsible for hearing and bearing.’

Riverview Principal Dr Paul Hine said the sculpture was a salient reminder for the school community.

‘It is a reminder that while Riverview is a place of joy and growth for so many who have walked through the gates over the years, for some it has been anything but’, he said.

‘It has resulted in the betrayal of their youth and produced life-long repercussions as a result of falling victim to the predications of those whose intentions were self-seeking and pernicious. The College cannot hide from this; nor should it. A shadow hangs over a very sad and lamentable part of the College’s otherwise illustrious history and we need to be reminded of the pain and suffering it has caused – a suffering that is ongoing.’

On the same day as the installation of the artwork, an Old Boy who was abused in the 1980s addressed a forum of parents and Old Boys about his experiences.

‘It was emotive and confronting, but it was important to hear’, said Dr Hine.