Called to be companions, not just problem solvers

Australian Jesuit Eka Tanaya shares what he learned about ministry during his time among migrant workers in South Korea.

Eka Tanaya of the Australian Province was one of 39 participants in the Scholastics and Brothers Circle (SBC) workshop held from December 19 to 28, 2016 at the Jesuit Apostolic Center in Seoul, South Korea. He shares his reflection on the workshop, which was themed ‘Understanding Migration: The South Korea Experience Guided by the Ignatian Teaching Paradigm’. 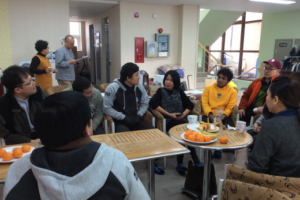 The day after the last term of my teaching regency at St Ignatius’ College, Adelaide, I immediately flew to Seoul for the SBC workshop. Seoul was my second SBC, after the one in Cambodia in 2012.

While we learned a fair bit about world migration issues — including the different definitions of migrants, statistics, movements throughout recent history, the UNHCR and how the Jesuit Refugee Service works — the main migration issue in South Korea revolves around the migrant workers who come from neighbouring countries including Vietnam, Cambodia, Thailand, the Philippines and China. Fr Seil Oh SJ explained that this phenomenon is the result of economic globalisation that often results in labour and ecological exploitation.

According to Provincial Fr Chong Che-chon SJ, the Korean Province has taken a significant interest in the issue of migrant workers and has committed to building a ‘bridge’ by assigning a number of Jesuits to the ministry. The province set up Yiutsari, which means ‘living with neighbours’, as a community centre for migrant workers around Gimpo, an industrial area west of Seoul.

South Korea needs a large number of workers for their construction, manufacturing and agriculture industries. Most of the local people consider this kind of work low skilled and physically strenuous, and therefore undesirable. However, for many foreign workers from poorer countries, the potential wages are attractive. The problems occur when there are discrepancies between what had been previously promised by their recruiters and the reality when they get to their place of work.

We were assigned in small groups to spend two nights in different migrant community centres to learn more about the lives of migrant workers. My group was assigned to Ansan, another industrial area south of Seoul, with migrant workers attached to the Earthian Station run by Mr Kim Yi-chan who was drawn by the great need of the migrant workers, mostly from Cambodia, to help them find fairness and justice while working in South Korea.

In those two nights, we learnt that migrant workers in the agricultural sector lead a difficult life and face harsh conditions. They often have inconsistent working hours and poor living quarters. They are sometimes subjected to financial, verbal and perhaps even physical abuse. This ugly situation is exacerbated by the language barrier.

All this was new to me. Unlike Australia, South Korea is not a destination for asylum seekers nor does it grant permanent residency easily to foreigners, except to spouses of Korean nationals. We were told that South Korea may also want to safeguard its strong homogenous cultural identity. The government makes little effort to systematically integrate foreigners into Korean society. Foreigners, including migrant workers, often have to rely on help from non-governmental organisations, such as Yiutsari and the Earthian Station.

One of the messages I brought home from the workshop is that each of us Jesuits in formation is called by Christ continually to contemplate on the needs of our world. I was particularly moved by Fr Isidore An’s story about how he gradually moved away from wanting to solve the problems of the migrant workers when he founded Yiutsari to becoming their companion. This realisation must have been the fruit of prayerful reflections upon his experiences and his relationships with the workers.

In the Third Week of the Spiritual Exercises, we are invited to contemplate the suffering and death of Jesus. Peter and John were invited to simply keep watch in Gethsemane but they kept failing. For Jesuits, this suggests that working and solving problems are not enough. Often part of our ministry is about being, not just doing. Like Peter and John, I often find this kind of invitation to be the more difficult challenge in my ministries. I often run out of patience and fail miserably at this task. Fr An’s initial work was to lay down the foundation for future ministries. Once that was done, he was then called to be a simple but faithful companion to those in need. He responded humbly to the new call.

As Jesuits in formation, we are called to build the kingdom of God by extending hospitality and generosity. We would like to respond to this call by collaborating with each other and with others outside the Jesuit circle to break down barriers that hinder humanity from flourishing.