Building togetherness at the Maytime Fair and on Mother's Day

Pope Francis gave a TED talk some two weeks ago titled: ‘Why the only future worth building includes everyone’. It has proved very popular, with more than one million people viewing it. Watching it with the forthcoming Mother’s Day and the Maytime Fair in mind, I found it most stimulating. 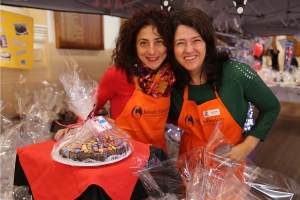 Stallholders at the Maytime Fair

Early in his talk the Pope posed the question he admitted he often asks himself especially when meeting people who are struggling in life, such as the sick, migrants, prisoners and the young looking for a job: ‘Why them and not me?’

His response to this question was simple: We are not islands; we need each other, and can only build a future together. We need scientific and technological innovation to bring us more equality and social inclusion. We are invited into the revolution of tenderness, following the path of human solidarity and humility.

Pope Francis reminded us that we live in a world where people can be easily discarded and where change, and hope, are up to each one of us. ‘The future of humankind’, he said, ‘isn’t exclusively in the hands of politicians, of great leaders, of big companies.

‘Yes, they do hold an enormous responsibility. But the future is, most of all, in the hands of those people who recognise the other as a “you” and themselves as part of an “us”.’ We need each other.

Mothers remind us that from birth, and whatever our age, we continue to need each other’s care. Children teach us about growing in love: simple ways such as our use of touch, gaze, voice and tenderness.

Our world can emphasise individualism, independence and isolation. We begin life dependent on the lifeblood of our mothers, but in growing up and becoming separate from them we can forget that we were born in relationship. We can learn to isolate ourselves from others as we grow. We can become lonely islands.

Last weekend we held the Maytime Fair at Xavier College in Victoria, raising funds for Jesuit Mission projects and partnerships in India and across Asia Pacific. As always I was deeply impressed by the energy and commitment of those involved in making this day possible.

People give up more than a day of their time, more than the offer of a donation or money. They are living examples of what Pope Francis is asking of us: of how, together, we are making the effort to build a future that includes everyone.