For International Women's Day, Province Delegate for Education Jennie Hickey reflects on how we can better pursue gender equality in our lives, workplaces and society.

This year’s theme for International Women’s Day is ‘Be Bold For Change’. As I reflected on this I was curious as to why we would need to be bold. 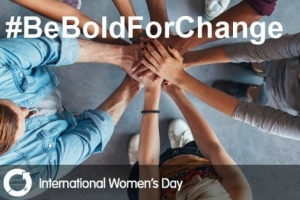 The slogan for this year’s International Women’s Day is Be Bold For Change.

Being bold, for me, conjures images of troublesome and naughty behaviour. Yet the Oxford dictionary defines bold as ‘courageous, enterprising and confident’. In this light, being bold for change, then, is an aspiration for good, for action, for assertiveness and urgency.

In the cover story of the SMH Business Day last weekend, Nassim Khadem talked with seven female board directors. These women spoke of the slowness and smallness of the change that has occurred over recent decades regarding female equality in the workplace.

Statistics still reflect a 16 per cent gender pay gap. While there has been some movement with regard to gender diversity on boards (25.3 per cent being women as at 31 January 2017), the ABS statistics as at August 2015 claim only 17 per cent of CEOs in Australian companies were women.

As a Province, we need to pay attention to how we compare to these statistics. At the beginning of 2017, the Social Apostolate at least compares very favourably: 80 per cent of CEOs, 50 per cent of board chairs and 43 per cent of board members in our social ministries are women.

The attitudes that underpin such dire statistics in the broader community run deep. In 2007 Shelly Correll, a professor of sociology at Cornell University in New York, studied hiring discrimination on the basis of parental status. Given the slowness of change in gender equity conditions, the study is still relevant.

In the experiment, four résumés of identical condition were presented to nearly 200 participants to review and place in order of preference for interview. Of the four résumés presented, two were female and two were male; one of each gender was single and one was a family person.

The female board directors in Khadem’s article talked of the need for a company to have a culture that would not tolerate bias, discrimination and poor behaviour, and where such things are called out for what they are.

We all play a role in shaping the various cultures in which we live and work, and we must continue to reflect on the contribution that we make, individually and collectively.

We can ask ourselves: What are my mindsets when employing a person? What influences the size of the income a person is worth? What do I think of people who call out poor behaviour?

The more transparent our processes and procedures are, the more chance there is to promote a positive and healthy culture, free from bias. As the Royal Commission has highlighted so well, cultures of secrecy with a lack of processes for accountability can be disastrous.

At the same time, calling out discriminatory behaviour requires courage, and there must be a system of protection for those bold enough to speak up. The Province’s implementation of the Australian Childhood Foundation’s Safeguarding Children Program is one way we are working to promote a healthy culture.

We are co-creators in an ever-renewing world and are called to be agents of change even though this change can be slow. To paraphrase Elie Wiesel, writer, professor, political activist, Nobel laureate and Holocaust survivor, who died in July 2016, the opposite of love is not hate, it is apathy.

Let us be inspired this International Women’s Day to overcome our apathy and be bold for change.