In his recent book, Fr Gerald O’Collins has gathered a number of articles in which he explores Biblical passages and themes. The Scriptures, of course, are central in the work of all theologians. Their business is to give an account of faith that is faithful to Scripture, shapes a harmony from its diverse parts and speaks to the different cultures of their own time. Every theologian, then, must attend to the interpretation of Scripture by scholars as a resource for their own thought and to test it.

Fr O’Collins brings to his own articles on the New Testament the fruit of his education in classical languages. He focuses on the use of words in the New Testament and on the different senses they can have. This is particularly helpful when he explores words around which controversy circles – reconciliation, for example. To be reconciled can mean to accept something you would rather not, to iron out discrepancies in accounts, and to come to peace after conflict. When Paul speaks of reconciliation in the context of God’s work for us in Christ, the variety of its possible meanings needs careful attention.

Many of his articles draw to our attention the ways in which words are often repeated in the Gospels, gaining significance with each fresh use. In Luke’s Gospel, for example, the same Greek word is used to describe the inn where hospitality was denied to Mary as she prepared to give birth to Jesus, the inn to which the Good Samaritan took the mugged Jewish traveller in the parable, and the inn at Emmaus where the dejected travellers recognised Jesus after his crucifixion. With each repetition the image of the inn becomes more deeply associated with hospitality and mystery. It links the sacredness of God’s hospitality to us in Jesus and that of our hospitality to one another as Christ’s disciples.

When Mark describes Jesus’ cure of Peter’s mother in law, he says that she immediately rose up and served him. Unthinking readers might see this phrase as showing that a woman’s place is one of domestic service. O’Collins, however, points out that she is the first woman mentioned by Mark, that she is the only one who does something for him after being cured, and that shortly before, Mark says that in the desert angels had served Jesus. Later the women who stood by Jesus’ cross when all the men had fled are described as having served Jesus. In a fuller view Peter’s mother-in-law is seen as a perfect disciple of Jesus, not dismissed as a domestic servant. The Gospel challenges our grading of occupations by focusing on the persons engaged in them.

Many of the articles in the book enter controversies about the interpretation of events described in the Gospels. They often respond to flatter readings of Scripture than do the traditional accounts, such as the view that the Scriptural story of Jesus’ burial by Nicodemus has no historical basis.

When reading complex writings, some people delight in their harmonies and in the ways in which things come together. Others, including myself, find energy in the unexpected and the jagged edges. For scholars both instincts are proper starting points. In exploring passages in detail, they will then need to look seriously at the evidence for taking each path. O’Collins’ natural taste is for harmonies, and he is scrupulous in laying out the evidence for his interpretations.

The most interesting example of this difference is seen in the interpretation of the women’s behaviour at the end of Mark’s Gospel. In Mark 13.8, after being told that Jesus is risen and that they should go and tell his disciples to wait for him in Galilee, they flee in amazement and fear and tell no one. This verse is now commonly treated by scholars as the end of Mark’s own writing, and the existing ending, with its very different style and sensibility, is seen as a later addition. This leaves open the question whether Mark deliberately ended the Gospel there or whether his original ending is lost.

O’Collins, whose preference is to interpret the Gospel texts as they have come down to us, argues that the women’s response of fear and silence is one of immediate shock and awe, and that they later carried out their mission, as is clear in the existing ending of the Gospel.

I have always been fascinated by the sharp edges in Mark’s Gospel which take the reader into dark places where the mystery of God is to be sought. Throughout the Gospel fear, silence and the failure to observe commands are the jagged markers of these places. They indicate the failure to follow Jesus, a failure that is constant through the Gospel. That the Gospel should end in failure is breathtaking. It would be astringent but consoling to readers who may now have been confronting persecution and the abandonment of faith by some Christians. It would show that God’s love is stronger than all human failure. When they came to Mark’s Gospel, they would already know that the news did reach the disciples and that they did get to Galilee.

The beauty of the Gospel stories, like all stories, is that they invite the reader to complete them. This book helps us do this responsibly and leaves us better informed in our reading. 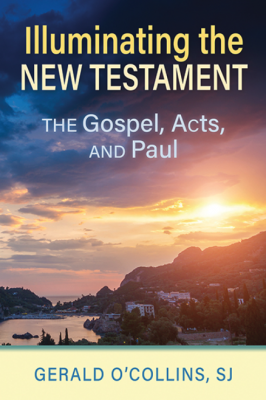 Find out more about Illuminating the New Testament: The Gospel, Acts, and Paul