The White Rose was a non-violent resistance group during World War II, six of whom were executed in 1943. The Australia-born international human rights organisation, the Benenson Society, takes the White Rose as its emblem and inspiration.

On Wednesday 22 August 2018, around 100 people, including staff and students from eleven Catholic secondary colleges, gathered at Xavier College in Melbourne to commemorate the 75th anniversary of the executions of six members of the White Rose.

Organised by the Australia-born international human rights organisation The Benenson Society*, the Melbourne Archdiocesan Office for Justice and Peace, and Xavier College, a Mass was held at the College’s Memorial Chapel, followed by a human rights forum. 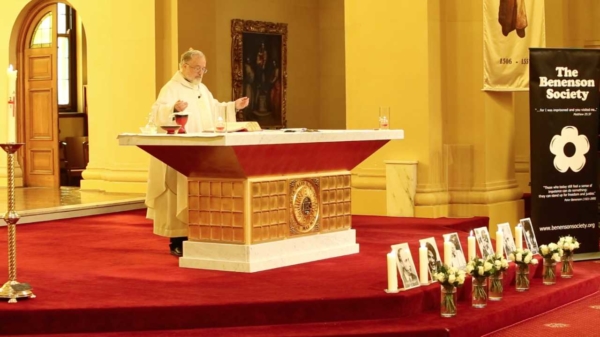 The White Rose was a non-violent resistance group during World War II, who wrote and distributed leaflets criticising the Nazi regime calling on their fellow German citizens to resist. Its members included Munich University students Sophie Scholl, her brother Hans Scholl, Christoph Probst, Alexander Schmorell, Willi Graf and their lecturer Kurt Huber. They were executed by guillotine in 1943.

At the beginning of the Mass, students entered carrying portraits of the five White Rose martyrs, candles and white roses.

During the homily, Fr Chris Middleton SJ, Rector of Xavier College and founder of the Benenson Society — which takes the White Rose as its emblem and inspiration — called on all the students present to work for human rights, balanced by passionate, loving hearts and discerning minds guided by Christian justice and Catholic Social Teaching.

‘It is important that we are realistic and humble in our commitment to human rights — perhaps we need especially to look to the good in others, and be very slow to judge, while at the same time engaging passionately in the work of making our world a better place’, Fr Middleton said.

Students from St Ignatius’ College Geelong reflected on the faith that motivated the members of the White Rose. Their deeply held sense of Christian hope influenced their courageous actions: Sophie and Hans Scholl, both Lutherans, read the writings of St Augustine and Blessed John Henry Newman. Willi Graf, a Catholic, joined illegal Catholic anti-Nazi youth organisations. Christoph Probst was baptised a Catholic as he awaited his execution. Alexander Schmorell has been declared a Saint in the Russian Orthodox Church.

Tony Weldon, from Courage to Care, called on the students to be ‘upstanders’ rather than bystanders against bullying, discrimination and human rights violations like those Righteous Among the Nations who risked their lives to save Jewish people during the Holocaust. Rabbi Jonathan Keren Black spoke of how the Jewish and Christian faiths were interrelated.

Students then divided up into small groups, reflecting on what they’d learnt and what actions they could take back to their schools to promote human rights. Some students reflected on building a culture, through small actions, among students of human dignity, respect and openness.

Those young people present signed postcards to the German Ambassador to Australia and the President of Munich University committing themselves to carrying on the legacy of the White Rose, to work for freedom, truth and human rights.

Fr Middleton remarked that human rights advocacy ‘is often frustrating because the forces that oppress appear so strong and little seems to be achieved by speaking out’. But he concluded by quoting soon-to-be-declared St Oscar Romero:

‘We plant seeds that one day will grow. We water the seeds already planted, knowing that they hold future promise … We cannot do everything, and there is a sense of liberation in realising that. This enables us to do something, and to do it very well. It may be incomplete, but it is a beginning, a step along the way, an opportunity for the Lord’s grace to enter and do the rest.’

To find out more about the Benenson Society and register visit: https://benensonsociety.org

If you wish to set up a Benenson chapter in your school, please contact Adrian Agpasa: adrian.agpasa@cam.org.au

By Adrian Agpasa, Office for Justice and Peace, Catholic Archdiocese of Melbourne and the Benenson Society