‘Trung, Sacha and Tom, I hope and pray that your encounters with the Risen Lord will sustain joyfully your Jesuit life and mission’, said Jesuit Conference of Asia Pacific President Fr Tony Moreno in his homily.

Three Australian Jesuits made their Final Vows this week at the Dalton Memorial Chapel at Saint Ignatius’ College, Riverview.

Fr Sacha Bermudez-Goldman SJ, Fr Tom Renshaw SJ and Fr Nguyen Hoang Trung were joined by friends and family for the Mass and a dinner. 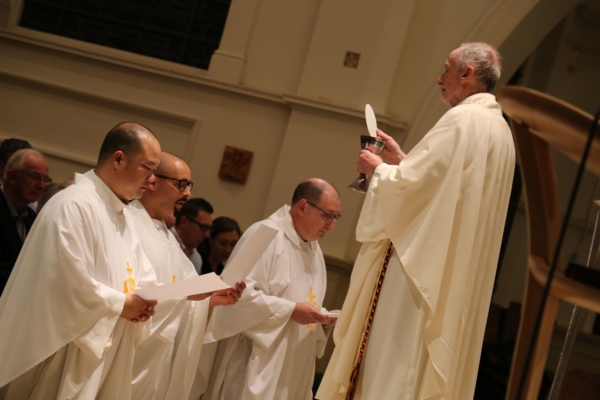 In his homily, Fr Moreno said the final vows — undertaken after a number of years in Jesuit ministry and a tertianship year — marked the end of formal formation for the three Jesuits.

‘It is a point of arrival, and at the same time a point of departure, in one’s Jesuit life’, he said.

Fr Moreno spoke of how the vows of poverty, chastity and obedience seem strange and unreasonable from a purely human point of view, particularly in light of so much of what is happening in our world today.

He said the recent attacks in Christchurch and Sri Lanka raise questions about what it means to be part of a community of reconciliation and justice, while the issues of clerical abuse in the Church and the rising numbers of non-believers in our society make us wonder what role religious life will play into the future.

Amidst this, the vows offer a pathway to God, a way of accompanying Jesus in solidarity with the marginalised.

‘The vows, alongside community and mission, are our pathways to God. They not simply limit what we can do or not do, and what we can have or not have.  They also define who we are and what we can be in collaboration with others to accomplish the mission’, he said.

Fr Moreno said the vows offer a space for God to dwell in us – citing the example of US Jesuit Fr Daniel Berrigan, who once wrote that in a time of struggle with his vocation he chose obedience to his vows, and as a result felt something ‘primal and strangely empowering’.

Fr Moreno said he hoped the three Jesuits making their final vows would find similar consolation in their vows and mission in the Society.

‘Trung, Sacha and Tom, I hope and pray that your encounters with the Risen Lord will sustain joyfully your Jesuit life and mission.’