On the awesomeness of priestly vocation

‘The people of God rejoice for you, and esteem you, for your preparedness to undertake this step.’ Homily by Bishop Gregory O’Kelly SJ during the priestly ordination of Kieran Gill SJ and Andy Nguyen SJ.

On Saturday 15 June, Kieran Gill SJ and Andy Nguyen SJ were ordained to the priesthood by Bishop Gregory O’Kelly SJ, during a well-attended ceremony at St Ignatius’ Church in Richmond, Vic.

Members of Kieran’s and Andy’s families were present for the ordination, and Fr Michael Boughton SJ, Kieran and Andy’s Superior at Boston College, also took part.

Below is Bishop O’Kelly’s homily from the Mass. For a video of the entire Ordination Mass, click here.

Andy and Kieran, a few moments ago you were called by the Church to this sacrament of the conferring of Holy Orders. It is different to what occurred when you took your religious vows in the Society, a step where the initiative was yours, to consecrate yourself as a disciple of Jesus.

Today, in the words spoken by Father Provincial, it is the Church which asks the Bishop to ordain you both to the priesthood. This is an acknowledgement of your own sacred history, that you have been brought to this moment of grace.

You both have come to the priesthood in different ways, but with common themes. You say it was the quality of community life among the Jesuits, an encounter with individual Jesuits, and an attraction to a spirituality which sought to find God in all things and serve the greatest need.

Your experiences in formation opened you to see how you might serve the people of God in your sacramental priesthood.

By their applause, the people of God endorsed your calling to priesthood, Andy and Kieran. The people of God rejoice for you, and esteem you, for your preparedness to undertake this step, of having hearts large enough to respond to this call from a Church blighted with acts of corruption, where the image of priesthood is blighted, and such sadness has beset the souls of the faithful. For your courage, thank you.

What GC 34 wrote over 20 years ago still pertains strongly to the vocation of the Jesuit priest. The ministry of priests of the Society, those documents stated:

‘is to be particularly directed towards those who have not heard the Gospel, those who are at the margins of the Church or of society, the voiceless and the powerless, those weak in faith or alienated from it, those whose values are undermined by contemporary culture, and those whose needs are greater than they can bear.’ 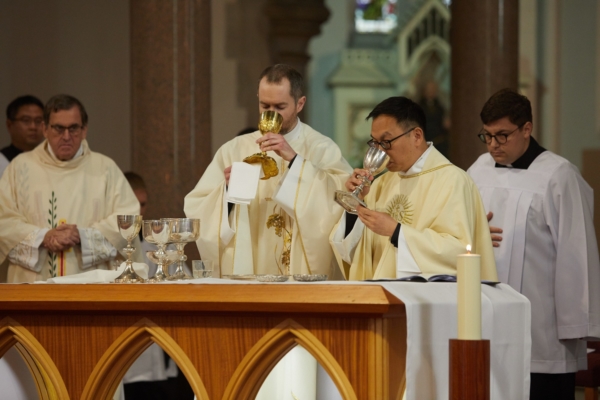 Pope Francis once commented that Jesus began to preach the Good News in the Galilee of the Gentiles, a crossroads for peoples of different races, cultures and religions, ‘akin to our situation now’.

As Paul wrote to Timothy, ‘You have in you a spiritual gift which was given to you when the prophets spoke and the body of elders laid their hands on you.’

There is only one priesthood in the Church, the priesthood of Jesus Christ in which all the baptised share. All are made the Body of Christ in the world through baptism.

When we were baptised we were anointed, and the priest prayed a prayer over us: ‘The God and Father of Our Lord Jesus Christ … welcomes you into his holy people. He now anoints you with the chrism of salvation. As Christ was anointed priest, prophet and king so may you live always as a member of His body, sharing everlasting life.’

All the baptised share the priestly office of Christ, to praise, heal, bless, consecrate, offer adoration and thanks to the Father of all that is created, a Father who calls each of us by name, and called us into being, who called us in love.

Within this priesthood of all the faithful there are those called to ordained ministry, some as deacons, others through the anointing of hands as priests. Their role is to serve the priesthood of the faithful, to strengthen the laity in their roles as priest, prophet and king.

Speaking to the Roman clergy at the Mass of Holy Chrism this year, Pope Francis said:

‘We are not distributors of bottled oil. We have been anointed to anoint. We anoint by distributing ourselves, distributing our vocation and our heart. When we anoint others, we ourselves are anointed anew by the faith and the affection of our people. 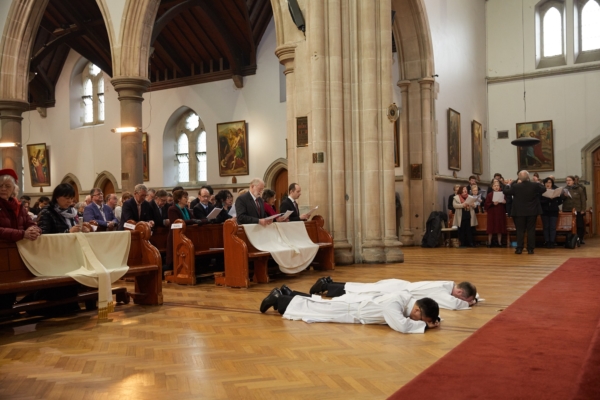 Before the rite of ordination, Kieran and Andy prostrate themselves in humility before God as the people of God invoke the intercession of the Saints for them.

These are overwhelming concepts. It makes sense of the saying of St John Vianney, the Curé of Ars, Patron of Priests, that ‘the priesthood is the love of the heart of Jesus’. We are missioned to live in our lives and in our ministries the expression of the Sacred Heart of Jesus, his compassion, forgiveness, unconditional love, merciful healing.

This is a spirituality that both of you have taken up so well in your vocation, and as is shown by the Scripture passages you chose for your ordination.

When your hands will be anointed this morning the Bishop will say: ‘May the Lord Jesus Christ … guard you and preserve you that you may sanctify (make holy) the Christian people and offer sacrifice to God.’

We are to do this through our prayerfulness, and the witness of our lives and how we minister. In the Chrism Mass last year, 2018, Pope Francis told the priests of Rome:

‘The priest who is close to his people walks amongst them with a closeness and tenderness of a good shepherd; in shepherding them he goes at times before them, at times remains in their midst and at other times walks behind them. Not only do people appreciate such a priest; even more, they feel there is something special about him, something they only feel in the presence of Jesus.’

Speaking of the vocation to become a Jesuit, Father Pedro Arupe once wrote: ‘Come if serving Christ is at the very centre of your life. Come if you have an open heart an open spirit, a reasonably open mind, and a heart larger than the world.’

May you continue to be blessed in this way, Andy and Kieran. To be and live this vocation demands hearts that are pure. For this we pray, and ask for prayers of all whom we serve.

And for the whole Church, you and I, the priestly people of God, may all of us live the prayer for the feast of all Saints of the Society of Jesus: ‘Keep us true to who we are, members of your body, and instruments in your hand.’

May you live your priestly ministry, Andy and Kieran, in this manner. Ad multos annos. Amen.