Jesuit Communications, publisher of Australian Catholics, Madonna and Eureka Street, has been recognised with 10 awards from the Australasian Catholic Press and Australasian Religious Press Associations. 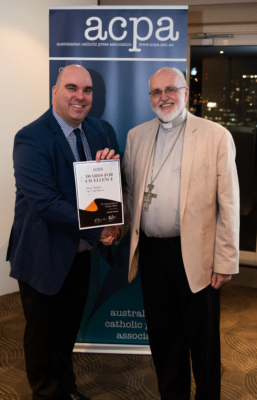 The Australasian Catholic Press Association (ACPA) handed out its awards at a ceremony on Wednesday 5 September, during the Catholic Communications Congress in Brisbane.

Mr McVeigh was elected the new president of ACPA at its AGM on Tuesday.

Following the awards, Mr McVeigh said he was particularly pleased at the award for ‘Best Feature – Multiple Authors’, which took in the contributions of a range of writers including Ann Rennie, Anna Krohn, Neve Mahoney, Meaghan O’Connor, Michael McGirr, Emile Ng, Fr Richard Leonard and Kate Moriarty, as well as the work of designers Maggie Power and Becky Xie.

‘Our “Extraordinary Women” edition explored the stories of many of the women — both historic and contemporary — who inspire us in our faith. It was great for us to be able to feature some very talented female writers in the edition, and we’re very pleased that their contributions were recognised with this award’, he said.

The Diocese of Wollongong’s Journey magazine won the Bishop Kennedy Award for 2018, recognised as the top Catholic publication in Australasia.

Jesuit Communications won four awards at that ceremony, including:

Tim Kroenert, who represented Jesuit Communications at the ceremony, noted that the award for Best Website for Eureka Street was pleasing because it is an acknowledgement of the work done by a whole range of people: ‘from the editorial team, to the site’s designers and administrators [Master Publisher], to the illustrators and many, many amazing writers who contribute their passion and efforts to make Eureka Street the magazine that it is’.

Mr Kroenert was particularly thrilled with Eureka Street consulting editor Fatima Measham’s win for Best Column. ‘Fatima’s column is something that many of our readers look forward to every fortnight; she tackles any topic with such wisdom, incisiveness and compassion, and it’s great to see her work recognised.’