Australian Jesuit reflects on his life among the Dalits

Disturbing the Dust, by Fr Tony Herbert SJ, will be launched by Jesuit Mission in North Sydney next week. The book gives witness to the struggle of the Dalits, and Fr Herbert's journey with them over the last half century.

What is the most important contribution a person can make to those living on the margins of society? This is one of the central questions in Jesuit priest Fr Tony Herbert’s new book, Disturbing the Dust, which has been published by Jesuit Mission. 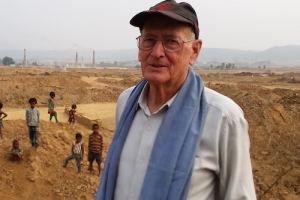 Fr Tony Herbert SJ with children of the brick kilns, in Karanpura Valley.

The Australian Jesuit, who was born and raised in Sydney, moved to India as a young scholastic in 1965 to work at the Australian mission that had been established there in 1951. In his most important – and challenging – ministry, he began working with the Dalits (‘Untouchables’) 37 years ago. He has spent the intervening years as a social activist, advocating for the Dalits in criminal, educational, health and land rights disputes, and speaking out against their exploitation by coal mining and logging companies.

In Disturbing the Dust Fr Herbert recounts some of his many experiences during his years as a missionary, and reflects on their role in shaping both the Dalits’ world and his own. Disabused of the romanticism of poverty, he relates his experiences – both quotidian and extraordinary – as a Jesuit immersed in the lives of India’s poorest, most marginalised caste. He acknowledges both the inroads that he has made over many long decades of work, and the failures he’s weathered. Perhaps most poignantly, he tackles the many ways in which his ministry has shaped him and his idea of church and faith.

The sense of pathos evoked in Fr Herbert’s writing is most movingly articulated in his assessment of his own impact on the villagers to whom he has devoted his life’s work.

‘The Dalits will not be high achievers: there will be no grand exam results, no vocations to the priesthood’, he writes.

‘Mine will not be a widely acknowledged and successful ministry. The fact is that the problems are all so vast and the experience is that they are beyond our capacity as a human beings to solve.’

But he balances this appraisal with the good news: the implementation of life-changing health and educational programs; the creation of women’s savings groups directed by the religious sisters with whom the Jesuits work closely; the reclamation of disputed land; and the gradual change among the people from the enslaved mentality of caste ideology to one which claims self-respect.

Ultimately, Disturbing the Dust is a book that gives witness to the Dalits’ struggle, and strips away the reader’s status to reveal in all of us a ‘common human poverty’.

Light refreshments will be served and copies of the book will be available for purchase and signing.