Major Superiors from across the Jesuit Conference of Asia Pacific gathered in Sydney last week. 'It was a good introduction to Australian culture, and the roots of how Australia became a nation', said new JCAP President Fr Tony Moreno SJ.

Major Superiors from across the Jesuit Conference of Asia Pacific (JCAP) gathered in Sydney last week. The assembly coincided with Australia Day commemorations, and gave the gathered Provincials a chance to deepen their understanding of Australian culture and life. 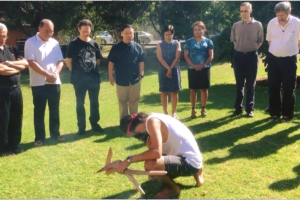 Kaleb Taylor helps open the JCAP meeting with an acknowledgement of the land of the Kuringgai people and a smoking ceremony.

These gatherings of Provincials generally take place twice a year in different countries across the region.

On the agenda for this meeting was the discernment of the universal apostolic preferences of the Society. The process has been initiated from Rome, engaging Jesuits and lay partners across the world in discernment as to the priorities of the Society moving forward.

There were also reports from the various Provinces, and updates on activities in the region’s common missions in Myanmar, Cambodia and East Timor.

It was also an opportunity for the Provincials to learn more about Australia and its history and culture.

Kaleb Taylor was invited to open the meeting with an acknowledgement of the land of the Kuringgai people and a smoking ceremony, while on Friday 26 January, the Provincials attended a commemoration of the 30th anniversary of the raising of the Aboriginal Flag above St Aloysius’ College on the eve of the Bicentenary in 1988.

‘It was a good introduction to Australian culture, and the roots of how Australia became a nation’, said Fr Moreno.

Fr Moreno also said that it was good to be exposed to Jesuit life and mission in Australia, particularly the collaboration with lay people in the mission, and its activities in the area of safeguarding.

‘We have a lot to learn from the experience of the Australian Province’, he said.

He also thanked all of those who went out of their way to make the Provincials welcome.

‘We were really thankful to the Australian Province for the warm hospitality.’