The meeting took place at the Jesuit-run Studio Audio Visual Puskat in Yogyakarta, where delegates were warmly hosted by Fr Yoseph Iswarahadi SJ and his staff.

Communications specialists from around the Jesuit Conference of Asia Pacific met in Yogyakarta, Indonesia on 3–5 July 2017 for their annual meeting. 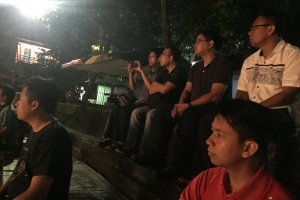 Two theology students from Yogyakarta also joined us for the meeting, which took place at the Jesuit-run Studio Audio Visual Puskat (SAVP), where we were warmly hosted by Fr Yoseph Iswarahadi SJ and his staff.

The meeting opened with a day of presentations, as each country’s delegate provided an update on activities and challenges faced during the past year.

This constitutes the ‘serious business’ of the meeting, as delegates celebrate and inspire each other with their achievements, and discuss ways we can continue to support each other.

A highlight of the meeting took place on the second day, when we travelled to Borobudur, the iconic ninth-century Mahayana Buddhist temple in Central Java.

Here we learned about the history of the temple and explored the story and philosophy of the Buddha through the thousands of graven reliefs that rim its numerous tiers.

This was followed by a visit to Omah Petroek youth arts centre, whose director Fr GP Sindhunata SJ led us on a tour of the inspiring and challenging artworks by Yogyakarta artists which are housed there in beautiful natural surrounds.

During the morning of the third day, the formal meeting came to a close, before we embarked on a city tour, including a visit to the Kanisius publishing house.

In the evening we attended a cultural night at Balai Budaya Minomartnai, part of SAVP, where we were entertained by traditional dancers and a shadow puppet show depicting one of the Indonesian customary Kancil Stories, about a puckish mouse-deer who helps resolve a conflict among other jungle animals.

The three days in Yogyakarta — marking, for some of us, our first visit to Indonesia — provided much opportunity for learning, sharing, reflecting and, importantly, building community across our JCAP communications ministries.

Next year’s meeting will be held in Vietnam.