‘God sees in each of you two [Fr Nico Lariosa SJ and Fr Alan Wong SJ] a heart of a man who stood up in front of a gathering of the people of God and answered “yes” to questions that will change your lives.’

Two Australian Jesuits, Fr Nico Lariosa and Fr Alan Wong, were ordained as priests at St Mary’s North Sydney on 16 June, inaugurating the next stage of their journeys as servants of Christ.

Bishop of Port Pirie and newly appointed Apostolic Administrator of the Archdiocese of Adelaide, Gregory O’Kelly SJ presided over the ordination. He expressed his hope that the example of the two Jesuits would inspire others to follow God’s call.

‘Your act of generous response to your vocation to be priests builds us all up’, he said. ‘May we in turn care for you, nurture you, and strengthen you as you seek to live your vocation of Jesuit and priestly commitment among God’s people, for the greater glory of God.’ 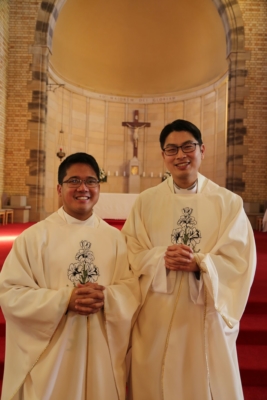 The ceremony began with the presentation of the candidates by Australian Provincial, Fr Brian McCoy SJ, and the Rector of the Faber Jesuit Community in Boston, Fr James Gartland SJ.

Fr Gartland spoke of the readiness of the two Jesuits for ordination, sharing some stories about each of them from their time in Boston.

‘I am here, we all are here this morning, because we love Nico and Alan. We are here because we wholeheartedly, and enthusiastically, ask the Church to ordain these outstanding Jesuits to the priesthood’, he said.

In his homily, Bishop O’Kelly commended the two young Jesuits for answering the call to priestly vocation.

‘God sees in each of you two a heart of a man who stood up in front of a gathering of the people of God and answered “yes” to questions that will change your lives, and then you will prostrate yourselves as low as you can to invoke the saints to guide you’, he said.

‘God in each of you sees the heart of a man who wants to live the beatitudes of Jesus. To be poor in spirit, the sharer of loss, gentle, wanting justice, merciful, pure in heart, willing to endure for the sake of true discipleship.’

‘You two are making your own answer today, very profoundly, in the presence of the Church. May there be other young men here today called as you are, by the Shepherd, to care for Christ’s people.’

The Jesuit vocation, he said, was as described by Pope Paul VI to be ‘placed between the boundaries of human culture and the deepest human desires, and the Gospel.’

‘Your formation in the intellectual apostolate takes you, Alan and Nico, into an apostolate amidst the ideologies’, he said.

‘Pope Francis notes that Jesus began to preach the Good News in the Galilee of the Gentiles – a crossroads for the people of different ages, cultures and religions, akin to our situation now… Francis spoke of the need to bring together the Catholic identity to meet the different souls existing in a multicultural society.’

At the conclusion of the ordination, Fr Nico Lariosa SJ gave thanks to all those involved in the celebration, and those who had accompanied himself and Alan – as well as Rob Morris, who was ordained in Christchurch earlier this month – in their journeys as Jesuits. In particular he spoke of the support they had received from their families, and brother Jesuits.

‘I am here today because of the people who accompanied me with their prayers, who encouraged me when I was down, and who challenged me courageously when I was blinded by my own illusions’, he said.

‘Please continue to pray for Rob, Alan and myself, that we may serve courageously, faithfully, and with integrity, so that we can be true witnesses of God’s mercy.’

Fr Lariosa also had a message for other young people considering religious life.

‘For our young people here: Do not be afraid to say “yes” to Christ’s invitation. Religious life is a wonderful life if you’re being called to it… You don’t need to wait until you are perfect, or until you are 100 per cent sure, because you will never get there. Just make a commitment.’

View some more images from the ordination.

View a video of the two new priests being congratulated by their fellow Jesuits.

Are you being called to Jesuit life?

For more information about becoming a Jesuit, contact us at vocations@sjasl.org.au