Jesuit priest, Fr Andrew Hamilton SJ, has had a whole range of experiences over time. However, writing, poetry and time with nature keep him grounded.

Each morning from around 6am, you’ll find Fr Andrew Hamilton SJ (known as ‘Andy’) walking among the trees and paths of Royal Park, Parkville, in Melbourne’s inner north. As he makes his way through the pre-dawn mist, he inhales the crisp morning air and notices how the moonlight radiates across the towering gums, and how the trees create an array of shadows across the fields. As the sun slowly makes it way above the horizon, its golden light hitting the surging treetops, ‘bringing them to life’, Andy continues to walk and pray.

Andy Hamilton is a Jesuit priest who, at 83 years, has seen and experienced a lot. However, it is time spent in nature that most grounds him and provides ‘the base line’ for all other events that take place in his life, including his relationship with God. He can trace his deep love of nature and God back to his childhood.

Born in Gardenvale, an inner-city suburb in the south of Melbourne, he was the third of five children to Jim and Marjorie Hamilton. His father was the ‘Catholic doctor south of the river’; his mum was a nurse in her earlier years, and half of their large family home was used as the surgery.

Andy’s fondest childhood memories are of his visits to the family’s cottage in Emerald in the countryside east of Melbourne. ‘Our family had a little house set in the bush up in the hills, with Emerald Lake nearby. There was no electricity, no gas, and Puffing Billy was the standard means of transport up there at the time. It was a paradise,’ he says. ‘When we first went there, towards the end of the war, there was still petrol rationing, so I’d often come back from Mass in someone’s horse and cart.’

Andy says his vocation was ‘rooted’ during this time in Emerald as a child. ‘It was idyllic in the bush, walking through bush roads and things like that. There was a sense of God in that, and finding God in nature. God in nature has always been very central to me.’ The importance of God, nature and walking remained with him during his years as a novice with the Jesuits.

‘Some of the key things I remember about that time are not specifically religious, but rather, of walking. Very simply, we used to go for walks on a Thursday in the Novitiate and this continued. You could go up to about 50 kilometres walking. We were young men walking through the Plenty country, down the back to Yan Yean and back through Arthurs Creek.’

It has been this recurrent experience of walking in nature—and later, cycling, which Andy still enjoys today—that has grounded his faith and outlook on life. ‘Any of the key events have always been associated with rediscovery of God in nature, you might say. It’s a bit like a harmony—that’s the baseline which other events were linked to.’ 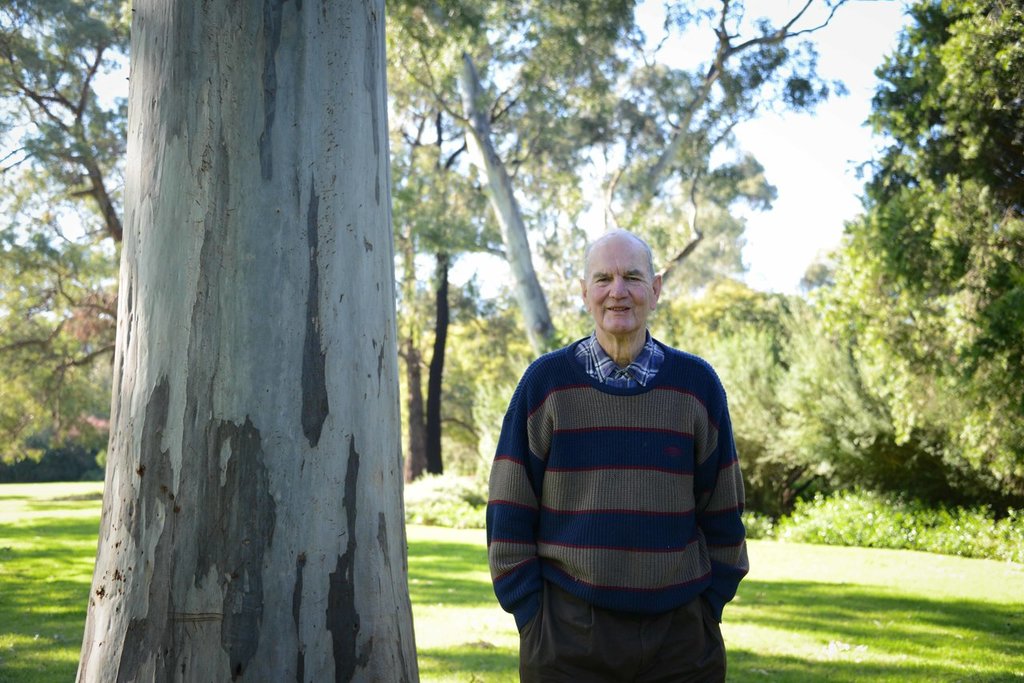 Life as a Jesuit

Andy was inspired to join the Jesuits during his high school years at Xavier College in Kew. Two teachers were particularly influential. One was Fr Bill (Jerry) Owens, who was ‘very intellectual and had broad cultural interests’ and who taught Andy Latin and Greek. The other was Fr Paul Keenan, ‘a country boy from Yarrawonga who was very much a companion to the boys, and the sports master at Xavier’.

When I was pondering my vocation, one of the things that reassured me, or had me thinking, ‘This mob might be worth joining,’ was a day that we [the ­students] were outside rolling the pitch and the sports master, who at that time always wore his coat and Jesuit gown, had taken them off, and underneath he had a jumper on with holes in the sleeve. I thought, ‘This is my mob. This is simple. Like Emerald.’ From there, I joined the Jesuits and became a novice.

Joining the Jesuits wasn’t (and isn’t) about becoming a priest, says Andy. Rather, it’s about joining a ‘brotherhood’. ‘To be a priest is important, but for me, that’s a stage along the way. It’s more about being in relationship with others, in community and brotherhood.’

Andy studied theology in Sydney and Melbourne. He taught at Xavier College for two years, and later taught theology for 30 years at the United Faculty of Theology in Parkville. He has been involved in formation and retreats over the years and was a spiritual director for several years. However, the most ‘life-changing experience’ he has had in ministry was the time he spent in a Cambodian refugee camp on the border of Thailand, with Jesuit Refugee Service.

‘I decided I really needed some experience to take me beyond where I was at,’ he says. ‘My time in the Khmer camps put bone and faces on the following of Jesus in poverty and humiliation that was central to St Ignatius. The refugee stuff was hands on, and that’s what I was looking for and that’s why it was hard too. For me, it had always been intellectual—I was very strong on a Catholicism that was about the poor or working for the poor—but following Vatican II, it was about going out to the poor. And I was terribly aware that I was scared stiff of actually meeting a poor person.

‘It was a bit like a retreat in some ways, of rediscovering myself as a sinner, but also being very much blessed by the company—by the refugees themselves, the Cambodian people I was working with, by the extraordinary people who were gathered, often young volunteers from around the world, and also by the extraordinary older Jesuit characters.’

Though difficult, this ‘very rich experience’ paved the way for Andy to remain in contact with the refugees who came to Australia, first visiting them in immigration centres and later providing support and friendship when they were living in the community. He has been chaplain for the Lao community for 37 years, and chaplain for the Cambodian community for many years. 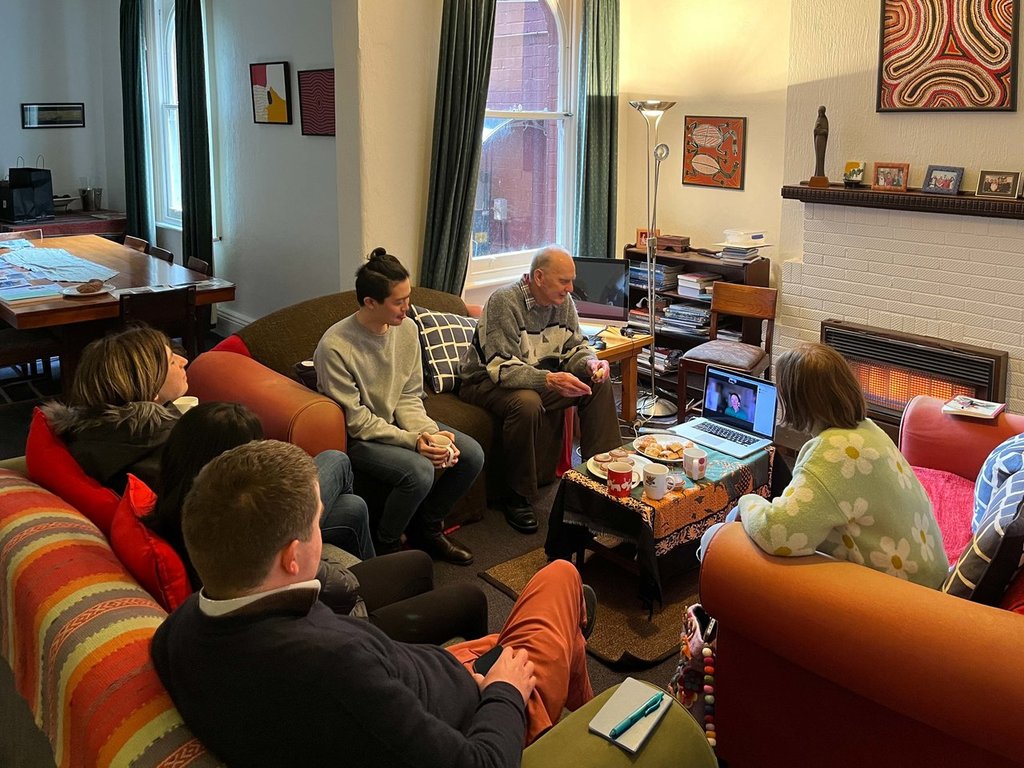 Fr Andy hosts an afternoon in Parkville with writers and poets from near and far.

Life as a writer and poet

It is these rich, hands-on life experiences that form the basis of Andy’s writing and poetry, which often cover topics related to social justice, politics, life, faith, nature and people—both the social and the personal. ‘I can write on anything, but it needs to make sense of the experience of people on the edge,’ he says.

Andy is not shy to delve into relationships in his writing, which he says are ‘key to everything’, certainly in his writing about Australian politics or society. ‘To be a human being is to be shaped by relationship.’

Having started writing articles in 1967 for Annals, today you can regularly read Andy’s work in Eureka Street, Australian Catholics and Madonna. Each month, Andy also freely shares 6–8 topical articles that he’s written from Jesuit Social Services and Jesuit Communications for schools and parishes across Australia.

The heart of Andy’s writing can be found in his poetry. ‘Poetry is the most important form of writing I do for myself. It’s the one I take most seriously,’ he says. ‘It’s part of me now.’ He was inspired by another Jesuit contemporary, Fr Peter Steele, who was ‘an extraordinarily fine poet,’ according to Andy. ‘But I think the energy came for it very much from contact with refugees and particularly with refugees in Australia.’

When it comes to poetry, Andy says, ‘I think a lot of it is sorting out a deep and elusive feeling. It’s a feeling and an observation of the world and where they come together. I suppose they’re always dealing with your relationship to people or to incidents or things like that, but they’re normally little stories turned into poems.’ Andy also enjoys weaving imagery into his poetry, often drawing from his observations and experiences in nature. ‘I think the gift I have in writing is through imagery, at least if I’m on song. If you can find an image that runs through the poem, that’s good.’

Andy says he hasn’t written as many poems as he’d like but finds continued inspiration in the writing and poetry gatherings that he is part of. He also finds continued nourishment in prayer, silence and solitude, particularly during his daily walks in the park.

‘I think it’s that kind of solitude where you get out into the park in the morning and you know at that stage, you’re carrying thoughts like, “What am I going do today?” Or “What are the pressures?” And those things can be edging at you or possessing you, but then you look at the trees and look at the sky and think, how unimportant these are compared to the gift of being invited into this world and the gift of being alive in the world and being called and loved by God in the world. That’s what I come back to. And that lasts a full two minutes, usually.’ 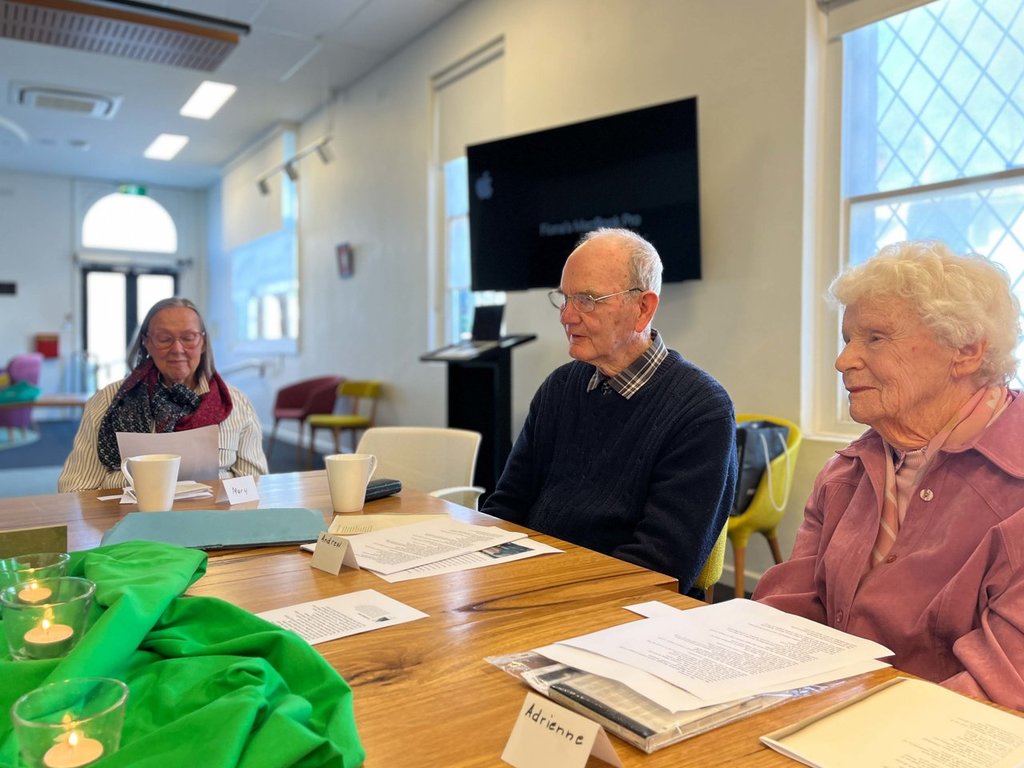 Fr Andy at a poetry gathering held at The Mercy Hub in North Carlton.

Humility
is to walk in the cool of early morning
and to notice
tree trunks redden,
shrubs sport twenty shades of green,
grass bubbling up dew-touched.
Each blade reaching for the sun,
a thousand dandelions
flashing their teeth at bees and butterflies,
mynas and magpies calling,
jostling to mark out their territories,
sunlight catching a white dog rolling in the grass,
and over the rise the city towers
made lovely, almost human, as they throw back light—
and, within all of this,
so much growing, hunting, dying, changing, reaching, falling.
Humility is wonder,
riding gratitude like a wave
that, briefly in this tiny space,
I am given some small part,
and words with which to bless.
Republished with permission from Melbourne Catholic. View the original article.

Written by Fiona Basile. Fiona is a freelance writer and photographer. She is a regular contributor to Melbourne Catholic. Photos are also by Fiona.