To mark the end of the Ignatian Year (2021-2022), which has been celebrated in many parts of the world, Magis Network Australia ran its second annual ‘Ignatian Camino’—a pilgrimage for young adults, which took place from 26 June to 3 July. A group of seventeen people drove to South Australia on Sunday 26 June and then walked 125km over six days (an average of 21km/day) from Gawler to Sevenhill, in the Clare Valley.

The group included fifteen young people, mainly students from Newman and St Mary’s Colleges in Melbourne and two leaders, Ms Danusia Kaska (Pastoral and residential coordinator at St Mary’s College) and Jesuit priest Fr Sacha Bermudez-Goldman SJ. The group stayed in caravan parks along the way, sleeping in small cabins as well as on the floor of a couple of parish halls.

Guided by the motto, “All things new 2022: spirituality, service and wellbeing”, the group was able to walk together as a faith community, enjoy the beauty of God’s creation, reflect on daily themes and engage in rich liturgies and sharing at the end of each day. As Danusia aptly noted: “Everyone commented on the richness of the conversations we shared on the journey which helped us to get to know each other more deeply and made the Camino more fulfilling. Through this rich sharing in our conversations we grew as individuals, as a group and in our relationship with God, whilst being surrounded by beautiful scenery—and this made the kilometres just go by!” 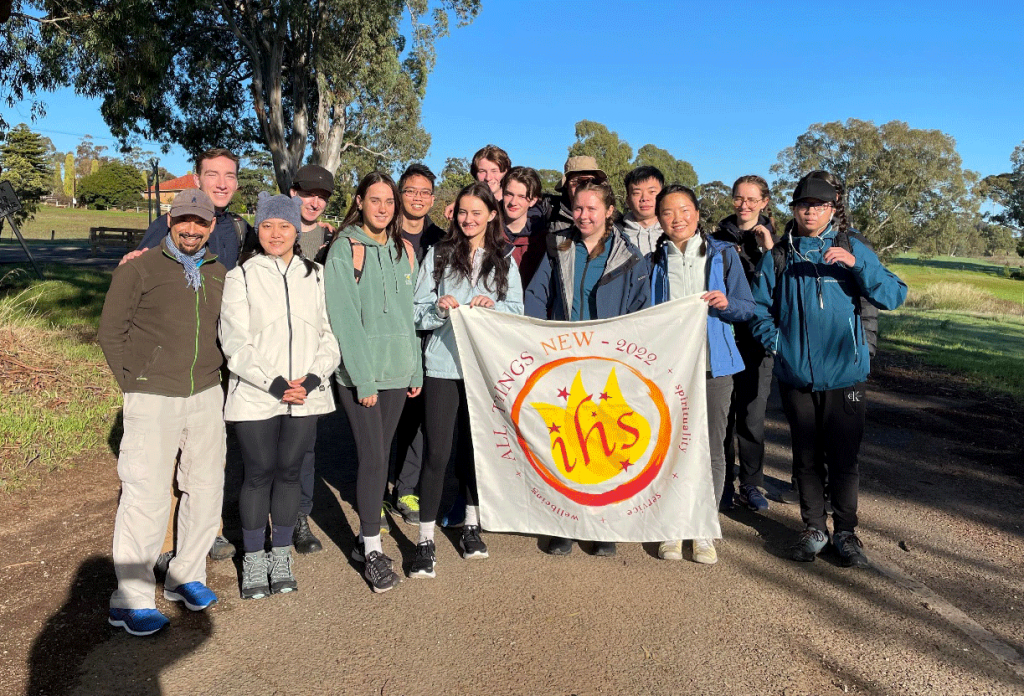 The pilgrims were also recipients of the wonderful hospitality offered by individuals and various communities who welcomed them and prepared delicious meals for them along the way.

The pilgrimage route—along the Barossa and Clare valleys—followed the steps of the first Jesuits to arrive in Australia back in 1848, going from Gawler through to Tanunda, Nuriootpa, Kapunda, Riverton, Auburn and finally to Sevenhill, where the Jesuits currently run a parish, a retreat centre and a winery. 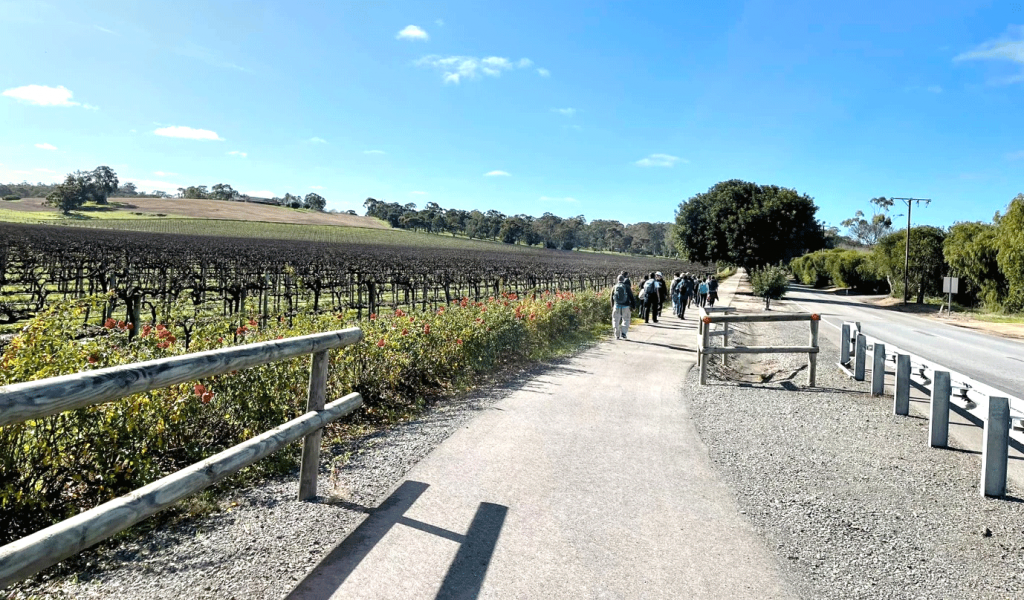 Walking along the Barossa trail on the way from Tanunda to Nurioopta.

As an added ‘bonus’, this year the Ignatian Camino coincided with a fundraising campaign organised by Jesuit Mission during the month of July called ‘One Foot Raised’, to help raise funds for the great development projects they support in different countries such as East Timor, Myanmar, Cambodia and Vietnam. As explained in their description of this initiative:

“St Ignatius himself described the ideal leader as living with ‘one foot raised’, moving always into new lands and new cultures, ready to step forward and respond to human need and suffering in the world. We walk because Ignatius walked, we walk because Jesuit Missionaries walk alongside the marginalised and we walk because many children in Jesuit Mission-supported schools walk long distances each day to gain a quality education”.

The group, then, decided to ‘pair up’ with Jesuit Mission and asked the support of family and friends to help them ‘walk with one foot raised’ along their 125km ‘Ignatian Camino’ and contribute to this worthy cause. And their efforts have paid off—so far they have raised close to $2200 and donations are still coming in. 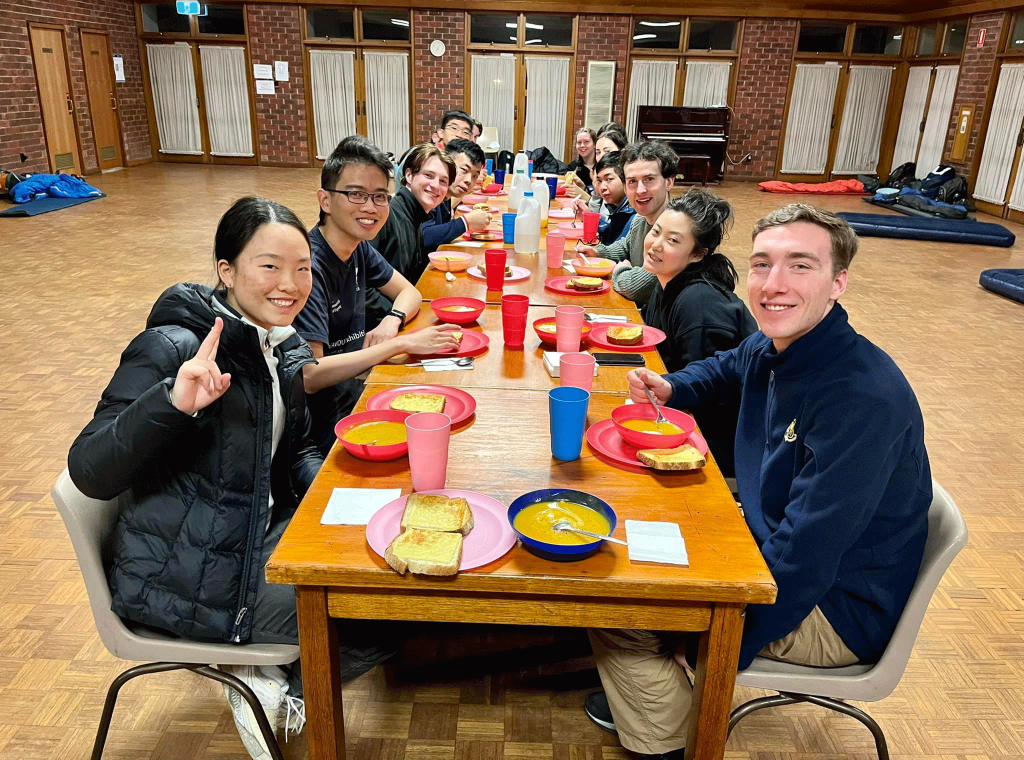 The pilgrims having dinner at the Parish Hall of St Ignatius’ Parish Norwood, Adelaide

Judging from the young adults’ comments, this year’s Camino was again a rewarding and fulfilling experience for all who participated in it. Here are a couple of testimonials from some of the young adult participants:

What a week! What a journey! It was a journey of trivial struggles. Of blisters, tired legs and challenged minds. Yet it was these struggles that made this pilgrimage so singular and spawned a beautiful bond with the environment and our group. However, the most magical aspect of the trip was seeing the pure joy we provided to many South Australians, simply by way of being on this pilgrimage. Whether it was the passionate Fr Mark, the welcoming Fr Kieran or any of the numerous locals we met along the way, the hospitality and good will we received was outstanding. It started to dawn on us how spiritually fulfilling this journey could be when we saw the genuine impact we were having on total strangers. It is certainly a week that will stick in my memory long into the future.

We had no idea what to expect when we signed up for the Camino, just that we had to walk a total of 125km from Gawler to Sevenhill in South Australia. At the time, the extent of that distance seemed very obscure, but by the end we really understood its physical meaning and were surprised by how far you can actually travel on foot! The long walks allowed us to get to know each other in a way we never could have in the bustling college setting. They involved sharing stories, banter and so much laughter that our abs got a thorough workout along with our leg muscles.

Of course, there were also moments of silence, which helped us to contemplate, reflect and preserve our energy. The beautiful rolling hills and vineyards made us feel like we were in ‘The Sound of Music’, prompting us to sing the entire soundtrack—to the dismay of our fellow pilgrims! We were touched by the hospitality and kindness of all the people we met on the way, especially the parishioners with the lovely meals they cooked for us and Father Kieran and Mark’s beautiful Masses. We have all grown so fond of one another throughout this experience and we will miss the unbeatable group dynamic and camaraderie

Sure enough, the environment during the Camino was every bit I imagined. Breathing the fresh air, gazing at the beautiful scenery, and feeling the warmth of the sun truly does wash away all your negativities. Everything gave me the headspace I needed to process my thoughts and empowered the feelings I buried deep in my heart for so long to finally rise to the surface. The effect was profoundly emotional. Despite being on my feet for most of the day, I did not feel the weight of my legs slowing me down, it was almost as though my legs were moving on their own. In fact, I felt more energised with each and every passing moment. Indeed, the Camino gave me all that I set out to achieve. I felt content, was thoroughly enjoying myself, and was determined to finish the journey.

What made the Camino even more memorable were the people, not just my fellow pilgrims but also the locals whose towns we passed by. Safe to say, we pilgrims felt both welcomed and touched by their extraordinary hospitality… There were many facets to the Camino that made it as gratifying as it was. But most prominently, being in the Camino detached me from my usual environment and put me in a place where I had the mental freedom to reflect deeply over the past 2 years – an opportunity that does not happen often. And I did. Doing so made me more self-aware and made me realise how incredibly blessed I am despite all the misfortunes and challenges. It also required a lot of fortitude. But that, to me, is the sine qua non for an enriching and transformative experience on the Camino. 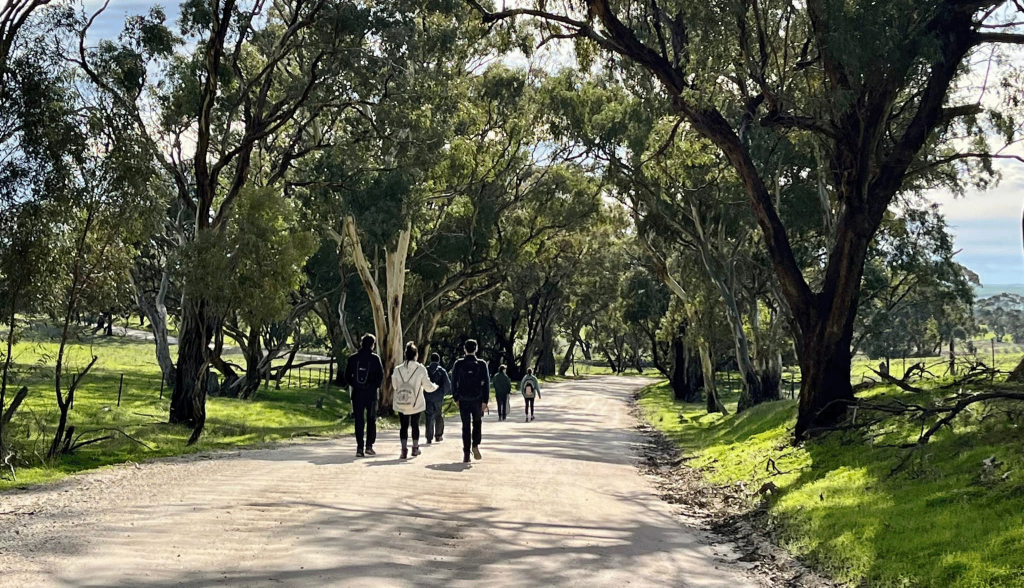 On the way to Riverton, in the Clare Valley.

If you would like to contribute to the Ignatian Camino for Young Adults fundraising efforts please go to:

Feature photo: The pilgrims walking on a trail in the Clare Valley.