The Australian Union of Jesuit Alumni/ae (AUJA) and friends met for dinner on 23 August 2018 at the Ron Dyer Centre in North Sydney.

Among the guests were representatives from Newman College, Old Xaverians, Old Ignatians Union, and St Aloysius’ College Old Boys Union. It was a lively occasion with two compelling speakers who each brought a different perspective of missionary activity.

Fr David Strong SJ (St Aloysius’ 1956) spoke about his recently launched two-volume Call to Mission — A History of the Jesuits in China 1842–1954. 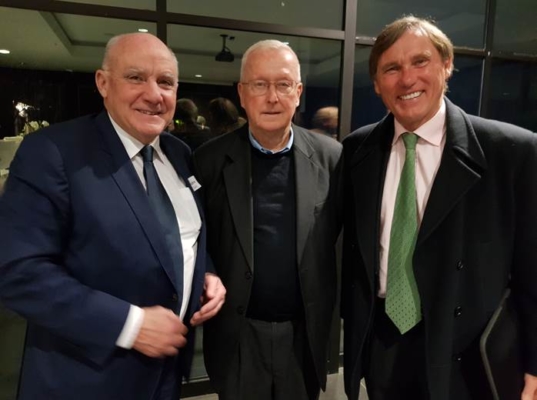 The talk by Fr Strong discussed the highs and lows of the work of the Jesuit missionaries in China in the period from 1842 until 1954, when they were expelled from the country.

Creating Christian communities as a base for future local churches, the Jesuits accomplished the universal mission of the Church; however, they mostly imposed a model of European training on the Chinese.

Instead, he said, the desirable model for the future missionary commitment in China should correspond to that promoted by Matteo Ricci and his companions in the 17th and 18th centuries.

It should, in other words, be a model of adaptation and inculturation to be immersed in the Chinese culture with all its diversity while offering to it new insights from the European perspective.

In the book, he details the Jesuit experience in Korea, which dates back to the mid 16th century, when Jesuit Father Gregorio de Cespedes — the first European visitor to Korea — arrived as the military chaplain to the Catholic samurai troops in the Japanese occupying army.

Many samurai had been converted by the earliest Jesuit missionaries to Japan led by Francis Xavier.

‘By the early 17th century, the Jesuits had acquired significant influence at the imperial court in Beijing’, Pembroke writes. ‘The Chinese were impressed by their knowledge in the fields of science, mathematics and astronomy.

‘Matteo Ricci actively promoted Jesuit teachings, even going so far as to publish in 1603 a famous book, The True Meaning of the Lord in Heaven, which declared — with remarkable boldness — that a good Confucian should be a Catholic.

‘As Korea was a vassal state of China, Korean nobles and scholars regularly visited Beijing on tribute missions. They returned with Jesuit books, maps and teachings and spread the faith in Korea. This flowering was known as the “apostleship of the pen”.’

Catholicism and Christianity, seen by some in power as a threat to Confucian order, would have a fraught existence from the late 18th to mid 19th century, culminating in 1866 with a ‘violent anti-Christian storm’ that led to the capture and execution of thousands of Christians.

‘Eventually’, writes Pembroke, ‘in the late 19th century, as Korea was opened to foreign trade, Christian missionaries returned — no longer the Jesuits but mostly Presbyterians from north America.’

Pembroke’s book closes with a quote by a well-known Jesuit alumnus, Voltaire, who said that ‘History should be written as philosophy — as an account of human culture and civilisation, not of kings and conquests, but as an insight into the nature of mankind.’

It was a most stimulating evening and AUJA thanks Fr Strong SJ and Michael Pembroke.