The words ‘rest’, ‘relax’ and ‘day off’ just don’t feature in the lives of Sisters Anastasia and Gertrudis of Timor Leste. Along with fellow Alma Nuns they awake at 4am every morning and begin tirelessly working with the disabled and orphaned children in their care.

Recently Sisters Anastasia and Gertrudis toured Australia on a much needed fundraising tour and I was lucky enough to accompany them. The nuns do not get any financial support from government and rely heavily on the generosity of donors — not that they complain. 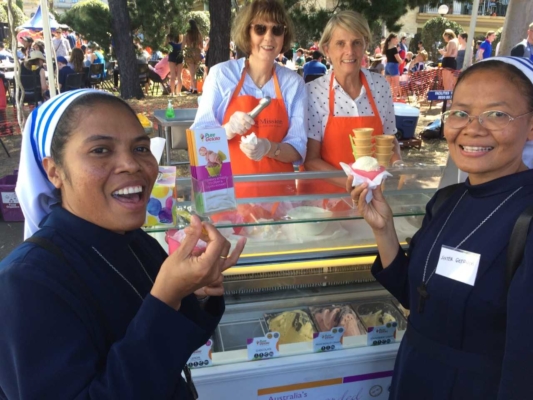 The Alma Nuns visit the Indian Bazaar in Sydney.

Their engagements in Australia saw them attend the famous Indian Bazaar, Jesuit Mission’s major Sydney fundraiser, at Saint Ignatius’ College Riverview, where they enjoyed a rare ice cream and proved a popular pair.

Sister Anastasia rose to the occasion doing her first ever presentations in English, which deeply moved all students and staff who witnessed them. She told listeners the Alma Nuns differed from other orders.

‘We live, sleep, eat and play with the disabled children we look after’, she said. ‘There is no divide between us. I am convinced all these children are gifts from God. They are my little brothers and sisters.’ (Many of these children are simply handed over to the Sisters by parents who can’t cope.)

In Melbourne, the two nuns were interviewed on ABC radio, and took part in a huge benefit concert at Seaman’s Mission. Several acts from Jesuit Social Services’ Artful Dodgers studio performed at the concert, including the Flybz, Da Hypnotist, and Indigenous guitar whiz Elijah and the Travellers.

The night was topped off when Sister Anastasia joined my band, the Dili All-stars, for a rousing rendition of pro-independence tune ‘Liberdade’. The two Sisters also enjoyed the set by Elvis impersonator Eugene Greene. Huge thanks to the students from Sienna College who volunteered on the night.

Paulie Stewart is a project officer for Jesuit Social Services in Melbourne.