Accompanied by Jesuit Social Services' Paulie Stewart, the sisters are raising funds for their tireless work with disabled children in Timor Leste, West Papua and Indonesia.

Caring for a disabled child in Australia is a tough and stressful task, but in third world countries like Timor Leste, West Papua and Indonesia, with their lack of basic care programs, specialised equipment and trained health workers, it can be a nightmare. 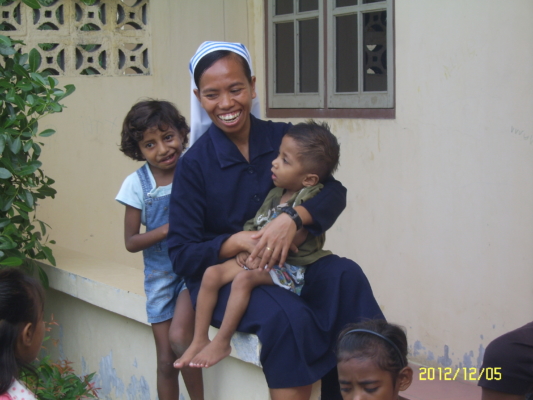 Alma Nuns Sister Serafina with some of the children with whom the sisters work.

That is why you have to hand it to the Alma Nuns who undertake such a hard task in those countries with virtually no support or assistance.

This September two of the sisters visit Australia on a much-needed fundraising tour.

They will also be involved with a big benefit concert at the Seaman’s Mission Melbourne (22 September from 4–8pm) featuring Australian/East Timorese soul band the Dili Allstars (of which Stewart is a member), the Travellers, the Flybz, Da Hypnotist and others.

Stewart said that along with friend Gil Santos he had met the nuns while in East Timor making soundtrack for the movie Balibo in 2010.

‘The movie was about the murder of five journalists by invading Indonesian forces in 1975, one of whom was my elder brother and HSV 7 Melbourne cameraman Tony Stewart.

`We had been asked to visit the nuns by friend Abel Guterres, who is East Timor’s Ambassador to Australia and said the sisters looked after “the lowest of the low”.

‘We met the nuns and were immediately impressed by their loving, persistent and life-changing work. They are living, breathing examples of the love of Jesus.’

Stewart said the Alma Nuns often faced financial difficulties and needed help, and so a 2018 fundraising visit had been organised.

‘In the past few years, the Alma Nuns have expanded their modest operations by receiving a donated van from Australia, constructing two classrooms at their premises for the children to learn skills, and by extending their work to East Timor’s poorer rural districts.’

There is a regular trail of visitors who drop in to see the sisters with gifts of cash and toys, clothes, educational material and sports goods.

‘Just dropping in to say “hi” is a real thrill for the sisters, who also take advantage to practise their English’, said Stewart.

The Alma Nuns face constant hardships as they rely on donations from supporters for almost all of their finances. You can donate to the Alma Nuns c/o Jesuit Mission, PO Box 193, North Sydney 2059.