A priest and the Beatitudes

Fr John Martis SJ reflects on the life of Fr John Wilcken SJ, in this homily from his funeral on 15 September at Immaculate Conception Church in Hawthorn.

About ten days before John’s death, I visited him at Mackillop Aged Care in East Hawthorn. The door of his room was shut. Knocking, I heard from within, ‘One moment, please!’ Then, about half a minute later: ‘Come in!’ 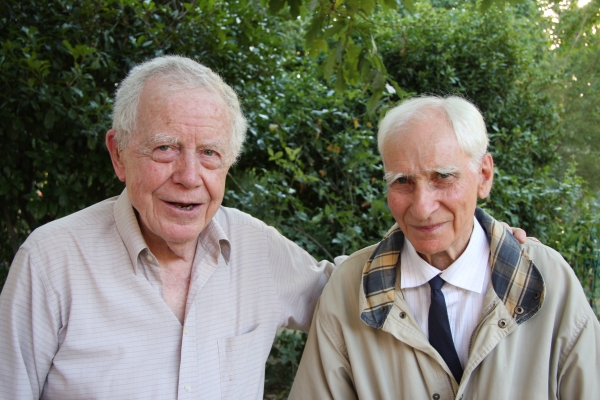 I opened the door cautiously, lest there be some nurses coming out. But John was alone. He was seated beside his bed, his beanie on, his Jerusalem bible open, with innumerable tabs and markers.

He smiled at me. ‘Excuse me, I was just praying a psalm, and wanted to finish this little bit.’

‘Sure, John, I can wait while you finish the rest.’

I walked to the other side of the room, and looked at the pictures, and in a minute or so, he was ready.

Now that we have lost him, that meeting will remain with me as a vignette of John. More than many of us, John lived in a kind of anteroom of the world to come. But he kept himself alert to hearing calls from this one, and to being reminded back into it when the need arose.

If life could be reported as a tweet, John Wilcken’s would be something like this: ‘Saw Vatican II, taught its liberation, lived priesthood gratefully and simply, believed in poverty, died in hope of the kingdom of heaven.’ 138 characters (two within the limit), and not even likely to start a war anywhere.

Tweets hit the mark, and then life opens up beyond them, or not at all. And the beatitudes of today’s Gospel (Matthew 5: 1-12) are maybe a series of tight messages like that. Each of us deciphers them in our own way. Along the journey, we give life to others, and, on the other side of these travails, perhaps we are walked through their meaning by the Angel, or Jesus himself. What, I wonder, might John be hearing now?

Blessed are the poor in Spirit, for theirs is the Kingdom of Heaven.

Walking in Royal Park recently, thinking about John, I overheard a passer-by talking on the phone about a friend who was ‘trading up his Beamer’. All I could think was: well, that wasn’t John! Had a BMW been somehow forced upon John, he would only be trading it one way: down. For him, spiritual poverty demanded actual poverty, or at least complete attention to living simply and cheaply. 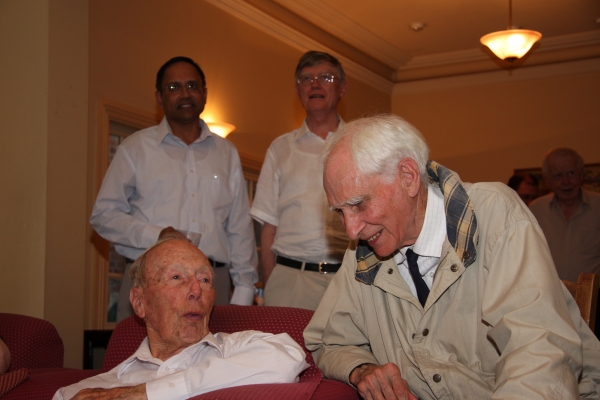 John with fellow Jesuits at Faber House in Parkville.

Stories abound: about worn-out jumpers of his that were hidden by community members, to force him to buy new general wear; of a jacket that he had worn for too many years, till the scholastics once cornered him, and physically forced him out of it, replacing it with one they had handy; ‘dollar CDs’ of dubious production value that had to suffice to sate his love of the most elevated music; his refusal to take remuneration for spiritual work, even on behalf of community, and so on.

The invitation to which the Spiritual Exercises of Ignatius invite our consideration, about following Christ in ‘actual poverty’, resonated with him in a starkly literal way.  Perhaps this ‘keeping it simple’ also reflected a certain level of anxiety, and need for predictability, which showed too in John’s attachment to routine in almost everything he did.

Blessed are they that hunger and thirst for what is right.

John loved to read the New Testament in its original Greek.  He would appreciate the word used here  for ‘what is right’: dikaiosuné. It means justice, but in a particular sense: a right ordering of the world, a ‘setting it straight’ under God, that is, as God would want it arranged.

John embraced this understanding. He found particular inspiration in liberation theology, sprouting in the 60s and 70s, focussing on right practice leading to reflection and prayer, in turn leading to theology stimulating right practice, and so on. He knew, too, that deeds, more than words. mattered, in being one with those whose dignity he was asserting.

At Corpus Christi (a community for disadvantaged men where John ministered for nearly three decades), he was found regularly in the kitchen, serving the meal with Marie, Silvio, Maria, and so many others who fed the men daily.

Blessed are the Peacemakers.

I cannot think of a time when I heard John raise his voice in an argument, or, for that matter, attack someone in print with immoderate phrases. I’m sure this peaceableness came again from an inner resolution to be nothing but the face of Jesus’ welcome and forgiveness, even under much provocation.

Not that his eyes did not flash, or threaten to flash, as the old Adam surfaced occasionally, when injustice threatened. I’m told that once, in the sixties, one of our budding scholastic theologians, writing in an archdiocesan catechetical magazine, found his article rejected by the censor – the priest in the archdiocese charged with deciding theological orthodoxy. The rejection came very late. The entire edition, which had already been printed, had to be pulped.

John, as the scholastic’s dean, wrote the archbishop. He defended the article point by point in its accuracy and faithfulness to original sources.  The defensive job done, he ended with a withering countershot, to this effect. ‘One must ask whether someone who has judged an article as this man has judged it, is fit to be diocesan censor at all?’ So here was a crouching tiger, as perhaps there should be in all peacemakers.

Blessed are they that mourn.

In the chapel at Greenvale there is a ring binder of some 85 handwritten entries, for men who have died at Corpus Christi since 1982, composed in the first years by Stan Lim, and after 2009 by John himself.  A brief handwritten note is stuck to the front cover: ‘This is a separate file for the men for whom we do not have photos – in order according to the date of death.’ 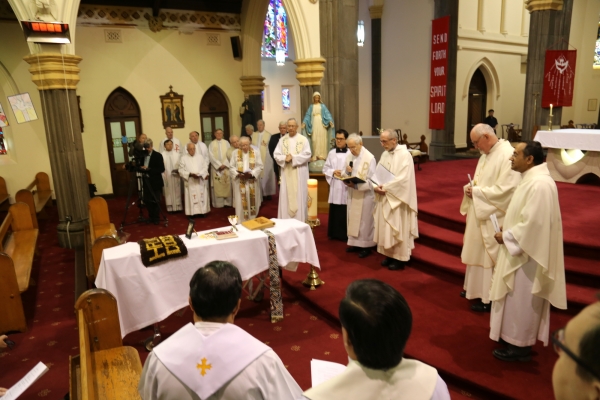 The final blessing at John’s funeral at Immaculate Conception Church.

Each of the entries is addressed to the dead man, naming the qualities which marked his life, and the reasons he will be remembered: friendship, intelligence and wit figure, with dress sense, love of games, and other more earthly qualities. There follows a short quotation from scripture.

Blessed are the Pure in Heart, for they shall see God.

Kierkegaard is well known for saying,’Purity of heart is to will one thing.’  For John, this one thing was undoubtedly Jesus of Nazareth, the Jesus of the Gospels,  and Jesus’ way, especially with the poor and otherwise discarded.

His homilies focused on this; a student of his Theology of the Human Person class recently said to me: ‘What I really remember of John’s classes is how he always made us conscious of Jesus.’ Not a bad accolade for a theologian.

Rejoice and be glad, for your reward will be great in heaven.

John, we farewell you by taking our consolation that you yourself are now part of the Lord’s forever.  You offered us a life, precious, spare and resisting adornment, simple, solid with God’s poor, witnessing, with Ezekiel, to the Lord who puts flesh on their bones, and yours with them.

We say goodbye now, looking to meet you again, each of us grateful: your dear family, your brothers and sisters from Jesuit, Ignatian and religious life, your colleagues from Catholic and ecumenical teaching and learning, your friends among our indigenous, the homeless, Regina Coeli, your beloved home that was Corpus Christi Community.  Thank you for giving us your all, for reminding us of Jesus’ way.  He takes your hand now. Remember us, and intercede for us.