This year Fr Christopher Willcock SJ marks 50 years as a member of the Society of Jesus. Born into a Catholic family and raised in Sydney and in Armidale, NSW, he became interested in becoming a priest at a very young age, and was eventually drawn to the Jesuits, where he has been able to pursue his priestly vocation alongside a lifelong love for music.

During his secondary school years in Armidale, he studied music practice and theory under the teacher nuns of a nearby girls school. Recognising his talent, his theory teacher arranged for him to have additional lessons from the esteemed English composer William Lovelock. He would go on to complete a degree in music at Sydney University, but the higher calling he’d felt since childhood hadn’t left him.

‘When it came to priesthood, I thought, I’ve got a degree in music, I wouldn’t mind being able to keep that alive’, recalls Fr Willcock. ‘I wasn’t sure that I was up for the monastic life. If I became a diocesan priest, well, there’s no guarantee.’

Fr Willcock had had some awareness of the Jesuits, who used to give retreats to the nuns who taught him at Armidale, and had met Fr Kevin King SJ at a young adult sodality he attended with a former student of St Aloysius’ College Milsons Point.

‘Being unsure about which direction to go, I thought I’d find out more about the Jesuits. So I checked the library and discovered they have had botanists, astronomers, poets, musicians, mathematicians, hang-gliders … maybe composers as well. 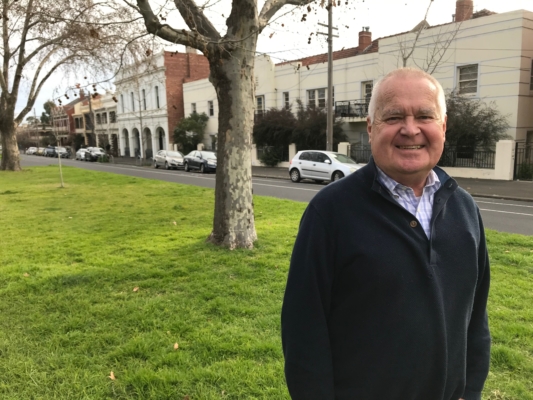 Fr Chris Willcock SJ near his home at the Park Drive Jesuit community in Parkville, Vic.

‘So I made an application, and was interviewed by the various men in Sydney before beginning my novitiate. I finished my degree, except for the Honours year, which I was able to do a bit later.’

After he was ordained in 1977, it was decided he would complete further studies in sacraments and in worship, which shared a strong synergy with his musical pursuits. He pursued these in Paris, due to the superiority of the courses there at the time. ‘But of course, living in Paris, you’re also not too far from many of the world’s best musicians!’

While music may not be a core aspect of the apostolates of the Society, Fr Willcock is certain it is part of its lifeblood. ‘Ignatius wasn’t known to have said much about music, but we know that, if he didn’t play the guitar, he certainly enjoyed people who did — being a north Spaniard that’s not surprising. Music was in the blood of the founder, and I assume of many of the people who were his first companions.

‘Once the Jesuits started entering into schools and parishes, then you have the question of what do we teach these kids, and how do we energise our liturgies? So the presence of music in those two contexts has been there.’

In some cases, he says, Jesuits have also been chief supporters of musical expression in public life. ‘Ballet survived in Europe because of the sponsorship of Jesuits and our schools. If we weren’t always the top composers in the world, we also made sure that we had the top composers working in our churches.’

The reasons for this esteem are, he says, both obvious and difficult to articulate. ‘Anybody who’s open to the power of music knows that power can’t be expressed in almost any other way. It’s not the same as looking at a piece of art, as reading a fine poem or a novel. Music has its own brief, its own corner of the soul.’

The creative work to which he has dedicated his Jesuit life was given clear articulation during the early 1990s, says Fr Willcock, who recalls that then Provincial Fr Bill Uren SJ stated strongly ‘that we should be not just men of imagination, but people who are able to discern what it is that fires the imagination of the people with whom we work’.

‘He was talking about the ballet, and what books people read’, says Fr Willcock. ‘What are the images that excite people? Are they all football images, or are there other images that capture people’s hearts and affections?

‘That resonated massively with my life as a Jesuit up to that point, and since. Unless we can discern what it is that fires our own imaginations, and have an instinct as to what ignites the imaginations of the people with whom we work, our apostleships as Jesuits are massively compromised.’

Fr Willcock sees this dynamic at work in the Society to this day. ‘If I’m going to do it by music, that will get my strongest and my most earnest effort. I’ll work hard and long to make sure that what I do is as good as I can make it, that the craftsmanship is as well wrought as I can make it, that it is saying something which is worth saying.

‘To get that more long term investment in people’s imaginative lives is critical. Are we doing it? I think we are to a large degree. We aren’t as numerous as we used to be. But we have a lot of good people who even if they haven’t said the same thing that I’ve just said, I don’t think of them as being too far from it.

‘I feel sustained and supported by the brothers who are doing other things. Not just older Jesuits but younger guys who have yet to carve a path for themselves in their own Jesuit lives. There are fabulous signs of health and strength there. We aren’t as numerous as we used to be, but the quality of our numbers is very heartening.

Do you have a desire to use your gifts and talents in the service of God? Does the idea of living out your faith at the frontiers of our world – both spiritual and physical – excite you? Perhaps you are being called to Jesuit life. Click here to find out more.