A Focus on the Future

Dear members of the Ignatian community,

We are pleased to provide an update regarding the recruitment of the College’s Principal following the announcement earlier this year of Peter Coffey’s retirement at the conclusion of 2022.

We are delighted to announce that well respected Catholic schools’ leader, Barbara Watkins, has been appointed as our interim Principal for 2023. Barbara will work alongside our long serving Rector, Fr Peter Hosking SJ, in a continuation of the College’s contemporary collaborative leadership model.

Barbara was Principal of highly regarded Loreto Normanhurst in Sydney for 10 years (2008-2018) where her leadership and strategic skills were integral to Loreto Normanhurst’s development and implementation of an award-winning Student Growth Model. She subsequently became the Director of System Performance at Sydney Catholic Schools, looking after more than 70 schools. She has a Master’s Degree in Educational Leadership and she has attended courses at London Business School and Stanford University. Through the Association of Independent Schools, she has mentored new Principals in NSW, along with executive leaders in the business community. Barbara is well versed in the Jesuit ethos and Ignatian pedagogy. Prior to Loreto Normanhurst, she held various roles at the Jesuit school of Saint Aloysius’ College, Milsons Point Sydney. 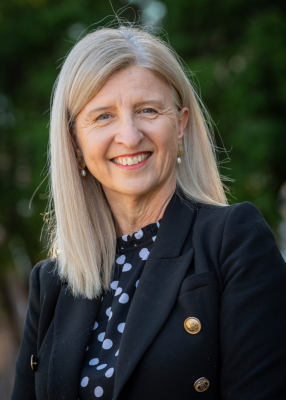 Barbara Watkins has been appointed as interim Principal of St Ignatius’ College, Adelaide for 2023.

Beyond her role as interim Principal in 2023, Barbara will have an ongoing consulting role at Saint Ignatius’ focused on preparing young people for a changing world by building a culture of innovation through high quality education and formation. This will involve leadership development across all levels of the school to support the continuing growth of staff as outstanding formators and practitioners.

The College is delighted to have someone with Barbara’s extraordinary range of experiences, depth of knowledge, and breadth of vision to guide us in our transition to our new Principal in 2024 and beyond. Barbara will be commencing during Term Four 2022 to ensure a smooth transition from Peter Coffey as retiring Principal. We hope all in our community will join in welcoming Barbara to Saint Ignatius’ College.

The College Board continues to work diligently with Jesuit Education Australia around the appointment of our new Principal for 2024 and looks forward to making further announcements in this regard during the 2023 school year.

The College community will farewell Mr Coffey later in the year with deep appreciation for all he has given to the College over many years, including the past five years as Principal.